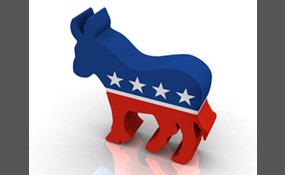 Now time for something interesting. Out of these ten likely Democratic candidates, which are you most likely not going to support/vote for if nominated? Please explain why.

Hillary Diane Rodham Clinton is a former United States Secretary of State, U.S. Senator, and First Lady of the United States. From 2009 to 2013, she was the 67th Secretary of State, serving under President Barack Obama. She previously represented Ne... w York in the U.S. Senate. Before that, as the wife of President Bill Clinton, she was First Lady from 1993 to 2001. In the 2008 election, Clinton was a leading candidate for the Democratic presidential nomination.A native of Illinois, Hillary Rodham was the first student commencement speaker at Wellesley College in 1969 and earned a J.D. From Yale Law School in 1973. After a brief stint as a Congressional legal counsel, she moved to Arkansas and married Bill Clinton in 1975. Rodham cofounded the Arkansas Advocates for Children and Families in 1977. In 1978, she became the first female chair of the Legal Services Corporation, and in 1979 the first female partner at Rose Law Firm. The National Law Journal twice listed her as one of the hundred most influential lawyers in America. As First Lady of Arkansas from 1979 to 1981 and 1983 to 1992 with husband Bill as Governor, she led a task force that reformed Arkansas's education system   more
6 votes
1 comment
Hillary Rodham Clinton - Voter Comments

Elizabeth Ann Warren is an American academic and politician, who is the senior United States Senator from Massachusetts and a member of the Democratic Party. She was previously a Harvard Law School professor specializing in bankruptcy law. Warren is...  an active consumer protection advocate whose work led to the conception and establishment of the U.S. Consumer Financial Protection Bureau. She has written a number of academic and popular works, and is a frequent subject of media interviews regarding the American economy and personal finance.In the wake of the 2008 financial crisis, Warren served as chair of the Congressional Oversight Panel created to oversee the Troubled Asset Relief Program. She later served as Assistant to the President and Special Advisor to the Secretary of the Treasury for the Consumer Financial Protection Bureau under President Barack Obama. In the late 2000s, she was recognized by publications such as the National Law Journal and the Time 100 as an increasingly influential public policy figure.In September 2011, Warren announced her candidacy for the U.S. Senate, challenging Republican incumbent Scott Brown   more
4 votes
0 comments
Elizabeth Warren - Voter Comments
No Comments
Vote & Comment
3

Joseph Robinette "Joe" Biden, Jr. Is the 47th and current Vice President of the United States, jointly elected with President Barack Obama. He is a member of the Democratic Party and was a United States Senator from Delaware from January 3, 1973, un... til his resignation on January 15, 2009, following his election to the Vice Presidency. In 2012, Biden was elected to a second term alongside Obama.Biden was born in Scranton, Pennsylvania, and lived there for ten years before moving to Delaware. He became an attorney in 1969, and was elected to the New Castle County council in 1970. Biden was first elected to the Senate in 1972 and became the sixth-youngest senator in U.S. history. He was re-elected to the Senate six times, and was the fourth most senior senator at the time of his resignation. Biden was a long-time member and former chairman of the Foreign Relations Committee. His strong advocacy helped bring about U.S. military assistance and intervention during the Bosnian War. He opposed the Gulf War in 1991. He voted in favor of the Iraq War Resolution in 2002, but later proposed resolutions to alter U.S. strategy there   more
2 votes
1 comment
Joe Biden - Voter Comments

Brian David Schweitzer is an American politician. He served as the 23rd Governor of Montana from January 5, 2005 to January 7, 2013. Schweitzer formerly served as chair of the Western Governors Association as well as the Democratic Governors Associa... tion. He also served as president of the Council of State Governments   more
1 vote
0 comments
Brian Schweitzer - Voter Comments
No Comments
Vote & Comment
5

Howard Brush Dean III is an American former politician who served as the 79th Governor of Vermont from 1991 to 2003 and Chairman of the Democratic National Committee from 2005 to 2009. In 2004, Dean was a candidate for the Democratic nomination for ... President of the United States. His implementation of the fifty-state strategy as head of the DNC, as well as his campaigning methods during the 2004 presidential campaign, are considered significant factors behind Democratic victories in the 2006 congressional elections and the 2008 presidential election.He was the Lieutenant Governor of Vermont from 1987 to 1991, and a member of the Vermont House of Representatives from 1983 to 1986. In the 2004 election, Dean was the top fundraiser and front runner, prior to the Iowa caucus, for the Democratic Party presidential nomination. Although his presidential campaign was unsuccessful, Dean pioneered Internet-based fundraising and grassroots organizing, which is centered on mass appeal to small donors which is more cost efficient than the more expensive contacting of fewer potential larger donors, and promotes active participatory democracy among the general public   more
1 vote
0 comments
Howard Dean - Voter Comments
No Comments
Vote & Comment
6

Andrew Mark Cuomo is an American politician who is the 56th and current Governor of New York. A member of the Democratic Party, Cuomo was elected Governor in 2010, holding the same position his father Mario Cuomo held from 1983-94.Born in Queens, Ne... w York, Cuomo is a graduate of Albany Law School. Cuomo began his career working as an assistant district attorney in New York City before entering private practice. He founded the Housing Enterprise for the Less Privileged and was appointed Chairman of the New York City Homeless Commission, where he served from 1990 to 1993.Cuomo then joined the Clinton Administration in 1993 when he was appointed assistant secretary for Community Planning and Development in the U.S. Department of Housing and Urban Development. He then served as Secretary of Housing and Urban Development from 1997 to 2001.After a failed campaign for Governor in 2002, Cuomo was elected to one term as Attorney General of New York in 2006; serving until 2011. After incumbent Governor David Paterson announced that he would not seek reelection, Cuomo announced his intentions to run for the Democratic nomination in May 2010   more
0 votes
0 comments
Andrew Cuomo - Voter Comments
No Comments
Vote & Comment
7

Kirsten Elizabeth Rutnik Gillibrand is an American politician and the junior United States Senator from New York, in office since 2009. Previously she served in the United States House of Representatives, representing New York's 20th congressional d... istrict, from 2007 to 2009. She is a member of the Democratic Party.In December 2008, President-elect Barack Obama nominated Hillary Rodham Clinton as Secretary of State, leaving an empty seat in the New York senate delegation. After two months and many potential names considered, Governor David Paterson appointed Gillibrand to fill the seat. Gillibrand was required to run in a special election in 2010, which she won with 63% of the vote. She was re-elected to a full six-year term in 2012 with 72% of the vote, the highest margin for any statewide candidate in New York.A member of the Democratic Party's relatively conservative Blue Dog faction while in the House, Gillibrand has been seen as a progressive since her appointment to the Senate. In both cases, her views were significantly defined by the respective constituency she served at the time—a conservative congressional district versus the generally liberal state of New York. For example, while quiet on the U.S. military's "Don't Ask, Don't Tell" policy when she was in the House, during her first 18 months in the Senate Gillibrand was an important part of the successful campaign to repeal this   more
0 votes
0 comments
Kirsten Gillibrand - Voter Comments
No Comments
Vote & Comment
8

Mark Robert Warner is an American politician and the senior United States Senator from Virginia, in office since 2009. He is a member of the Democratic Party. Warner was the 69th Governor of Virginia, holding the office from 2002 to 2006, and is the...  honorary chairman of the Forward Together PAC. Warner delivered the keynote address at the 2008 Democratic National Convention. Apart from politics, Warner is also known for his involvement in telecommunications-related venture capital during the 1980s; he founded the firm Columbia Capital.In 2006 he was widely expected to pursue the Democratic nomination in the 2008 U.S. presidential elections; however, he announced in October 2006 that he would not run, citing a desire not to disrupt his family life. Warner was considered to be a potential vice presidential candidate, until he took himself out of consideration after receiving the Democratic nomination for the U.S. Senate   more
0 votes
0 comments
Mark Warner - Voter Comments
No Comments
Vote & Comment
9

Martin Joseph O'Malley is an American politician and the 61st and current Governor of Maryland. First elected in 2006, he defeated incumbent Governor Robert Ehrlich, and again in a 2010 rematch. Prior to being elected as Governor, he served as the M... ayor of Baltimore from 1999 to 2007, having previously served as a Baltimore City Councilor from 1991 to 1999. A member of the Democratic Party, he served as the Chair of the Democratic Governors Association from 2011 to 2013.As Mayor, he focused his attention on public safety, and by implementing crime response reform, violent crimes in Baltimore were reduced by nearly 40%. As Governor, in 2011 he signed a law that would make certain undocumented immigrants eligible for in-state college tuition on condition; and in 2012, he signed a law to legalize same-sex marriage in Maryland. Each law was challenged to a voter referendum in the 2012 general election and upheld by a majority of the voting public   more
0 votes
0 comments
Martin O'Malley - Voter Comments
No Comments
Vote & Comment
10

Edmund Gerald "Jerry" Brown, Jr. Is an American politician who currently serves as the 39th Governor of California since 2011; he previously served as California's 34th Governor from 1975 to 1983. Both before and after his original two terms as Gove... rnor, Brown served in numerous state, local, and party positions. He was a member of the Los Angeles Community College District Board of Trustees, Secretary of State of California, chairman of the California Democratic Party, Mayor of Oakland and Attorney General of California.Brown sought the Democratic nominations for President of the United States in 1976, 1980, and 1992, and was the Democratic candidate for the United States Senate in California in 1982, but was unsuccessful in those attempts. He is the son of Pat Brown, the 32nd Governor of California. On October 7, 2013, he became the longest-serving governor in California history measured by cumulative service.As a consequence of the 28-year gap between his second and third terms, Brown has been both the sixth-youngest California governor and the oldest California governor in history   more
0 votes
0 comments
Jerry Brown - Voter Comments
No Comments
Vote & Comment
Leave a comment...
(Maximum 900 words)