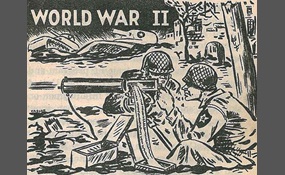 The most powerful and influential leader of his country during World War 2?

Adolf Hitler was an Austrian-born German politician and the leader of the Nazi Party. He was chancellor of Germany from 1933 to 1945 and dictator of Nazi Germany from 1934 to 1945. Hitler was at the centre of Nazi Germany, World War II in Europe, an... d the Holocaust.Hitler was a decorated veteran of World War I. He joined the German Workers' Party in 1919, and became leader of the NSDAP in 1921. In 1923, he attempted a coup in Munich to seize power. The failed coup resulted in Hitler's imprisonment, during which time he wrote his memoir, Mein Kampf. After his release in 1924, Hitler gained popular support by attacking the Treaty of Versailles that had been forced on Germany and promoted nationalism, Pan-Germanism, and antisemitism with charismatic oratory and Nazi propaganda. Hitler frequently denounced international capitalism and communism as being part of a Jewish conspiracy.Hitler's Nazi Party became the largest democratically elected party in the German Reichstag, leading to his appointment as chancellor in 1933. Following fresh elections won by his coalition, the Reichstag passed the Enabling Act, which began the process of transforming the Weimar Republic into the Third Reich, a single-party dictatorship based on the totalitarian and autocratic ideology of National Socialism. Hitler aimed to eliminate Jews from Germany and establish a New Order to counter what he saw as the injustice of the post-World War I international order dominated by Britain and France. His first six years in power resulted in rapid economic recovery from the Great Depression, the denunciation of restrictions imposed on Germany after World War I, and the annexation of territories that were home to millions of ethnic Germans, actions which gave him significant popular support   more
11 votes
1 comment
Adolf Hitler - Voter Comments

Joseph Stalin or Iosif Vissarionovich Stalin, was the leader of the Soviet Union from the mid-1920s until his death in 1953.Among the Bolshevik revolutionaries who took part in the Russian Revolution of 1917, Stalin was appointed general secretary o... f the party's Central Committee in 1922. He subsequently managed to consolidate power following the 1924 death of Lenin through suppressing Lenin's criticisms and expanding the functions of his role, all the while eliminating any opposition. By the late 1920s, he was the unchallenged leader of the Soviet Union. He remained general secretary until the post was abolished in 1952, concurrently serving as the Premier of the Soviet Union from 1941 onward.Under Stalin's rule, the concept of "socialism in one country" became a central tenet of Soviet society. He replaced the New Economic Policy introduced by Lenin in the early 1920s with a highly centralised command economy, launching a period of industrialization and collectivization that resulted in the rapid transformation of the USSR from an agrarian society into an industrial power. However, the economic changes coincided with the imprisonment of millions of people in Soviet correctional labour camps and the deportation of many others to remote areas. The initial upheaval in agriculture disrupted food production and contributed to the catastrophic Soviet famine of 1932–1933, known as the Holodomor in Ukraine. Later, in a period that lasted from 1936 to 1939, Stalin instituted a campaign against alleged enemies within his regime, called the Great Purge, in which hundreds of thousands were executed. Major figures in the Communist Party, such as the old Bolsheviks, Leon Trotsky, and several Red Army leaders, were killed after being convicted of plotting to overthrow the government and Stalin. These campaigns were in addition to the existing political repression in the Soviet Union, which was in effect continually after the October Revolution   more
1 vote
0 comments
Joseph Stalin - Voter Comments
No Comments
Vote & Comment
3

Franklin Delano Roosevelt, commonly known by his initials FDR, was an American lawyer and statesman who served as the 32nd President of the United States. From March 1933 to his death in April 1945, he was elected for four consecutive terms, and rem... ains the only president ever to serve more than eight years. He was a central figure in world events during the mid-20th century, leading the United States during a time of worldwide economic depression and total war. A dominant leader of the Democratic Party, he built a New Deal Coalition that realigned American politics after 1932, as his New Deal domestic policies defined American liberalism for the middle third of the 20th century.With the bouncy popular song "Happy Days Are Here Again" as his campaign theme, FDR defeated incumbent Republican Herbert Hoover in November 1932, at the depth of the Great Depression. Energized by his personal victory over polio, FDR's persistent optimism and activism contributed to a renewal of the national spirit. Assisted by key aide Harry Hopkins, he worked closely with British Prime Minister Winston Churchill and Soviet leader Joseph Stalin in leading the Allies against Nazi Germany and Japan in World War II   more
1 vote
0 comments
Franklin D. Roosevelt - Voter Comments
No Comments
Vote & Comment
5

Hideki Tōjō was a general of the Imperial Japanese Army, the leader of the Imperial Rule Assistance Association, and the 40th Prime Minister of Japan during most of World War II, from October 17, 1941 to July 22, 1944. As Prime Minister, he was dire... ctly responsible for the attack on Pearl Harbor, which initiated war between Japan and the United States, although planning for it had begun before he entered office. After the end of the war, Tōjō was arrested, sentenced to death for Japanese war crimes by the International Military Tribunal for the Far East, and was hanged on December 23, 1948   more
1 vote
0 comments
Hideki Tōjō - Voter Comments
No Comments
Vote & Comment
6

Charles André Joseph Marie de Gaulle was a French general and statesman who led the Free French Forces during World War II. He later founded the French Fifth Republic in 1958 and served as its first president from 1959 to 1969.De Gaulle came to the ... fore in the interwar army as a proponent of mobile armoured divisions. During World War II, he attained the rank of brigadier general. De Gaulle led the Free French Forces and a government in exile against France's pro-German Vichy government while he was in London and Africa, gained control of most French colonies, and participated in the liberation of Paris. Despite France's initial defeat, de Gaulle insisted that she be treated as a great power by the other Allies. His promotion of French national interests led to confrontations with Winston Churchill and Franklin D. Roosevelt, due to their initial unwillingness to inform him of the D-Day landings in June 1944.De Gaulle secured a permanent seat on the United Nations Security Council for France in 1945. After the war ended, de Gaulle became prime minister in the French Provisional Government, resigning in 1946 because of political conflicts. He founded his own political party, the Rally of the French People—Rassemblement du Peuple Francais, —in 1947. When the Algerian war crisis was ripping apart the Fourth Republic, the Assembly brought him back to power as President of the Council of Ministers during the May 1958 crisis. De Gaulle led the writing of a new constitution founding the Fifth Republic, and was elected President of France. Gaullism, de Gaulle's foreign policy strategy as president, asserted that France is a major power and should not rely on other countries, such as the United States, for its national security and prosperity. Often criticized for his "Politics of Grandeur", de Gaulle oversaw the development of French atomic weapons and promoted a foreign policy independent of "Anglo Saxon" influences. He withdrew France from NATO military command—although remaining a member of the Western alliance—and twice vetoed Britain's entry into the European Community. In May 1968, he appeared likely to lose power amidst widespread protests by students and workers, but survived the crisis with an increased majority in the Assembly. However, de Gaulle resigned in 1969 after losing a referendum in which he proposed more decentralization   more
0 votes
0 comments
Charles de Gaulle - Voter Comments
No Comments
Vote & Comment
7

Benito Amilcare Andrea Mussolini was an Italian politician, journalist, and leader of the National Fascist Party, ruling the country as Prime Minister from 1922 until his ousting in 1943. He ruled constitutionally until 1925, when he dropped all pre... tense of democracy and set up a legal dictatorship. Known as Il Duce, Mussolini was one of the key figures in the creation of fascism.Originally a member of the Italian Socialist Party, Mussolini was expelled from the PSI due to his opposition to the party's stance on neutrality in World War I. Mussolini denounced the PSI, and later founded the fascist movement. Following the March on Rome in October 1922 he became the youngest Prime Minister in Italian history until the appointment of Matteo Renzi on February 2014. After destroying all political opposition through his secret police and outlawing labor strikes, Mussolini and his fascist followers consolidated their power through a series of laws that transformed the nation into a one-party dictatorship. Within five years he had established dictatorial authority by both legal and extraordinary means, aspiring to create a totalitarian state. Mussolini remained in power until he was deposed by King Victor Emmanuel III in 1943. A few months later, he became the leader of the Italian Social Republic, a German client regime in northern Italy; he held this post until his death in 1945   more
0 votes
0 comments
Benito Mussolini - Voter Comments
No Comments
Vote & Comment
No comments yet.
Leave a comment...
(Maximum 900 words)
Privacy Policy | Terms of Use
Sitemap | View Desktop Version
©2021 Debate.org. All rights reserved.