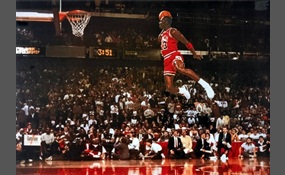 The top dunker in the NBA

Blake Austin Griffin is an American professional basketball player who currently plays for the Los Angeles Clippers of the National Basketball Association. Griffin had a renowned high school career at Oklahoma Christian School, winning state titles ... each of his four years under his father, Tommy Griffin, who was the head coach. He played college basketball for the University of Oklahoma Sooners and received numerous accolades in his second year, including the Naismith College Player of the Year, Oscar Robertson Trophy and the John Wooden Award.Griffin left college after two seasons to enter the 2009 NBA Draft; he was selected first overall by the Clippers. In his first season, he broke his left kneecap during the final pre-season game, had surgery, and missed the entire 2009–10 season. He made his NBA debut as a rookie the following season, in which he was selected as an All-Star, won the 2011 NBA Slam Dunk Contest, and was named the NBA Rookie of the Year. In 2011, Sports Illustrated called him one of the NBA's 15 Greatest Rookies of All Time   more
11 votes
1 comment
Blake Griffin - Voter Comments

LeBron Raymone James is an American professional basketball player for the Miami Heat of the National Basketball Association. Standing at 6 ft 8 in and weighing 250 lb, he has played the small forward and power forward positions. James has won two N... BA championships, four NBA Most Valuable Player Awards, two NBA Finals MVP Awards, two Olympic gold medals, an NBA scoring title, and the NBA Rookie of the Year Award. He has also been selected to ten NBA All-Star teams, nine All-NBA teams, and five All-Defensive teams, and is the Cleveland Cavaliers' all-time leading scorer.James played high school basketball at St. Vincent–St. Mary High School in his hometown of Akron, Ohio, where he was highly promoted in the national media as a future NBA superstar. After graduating, he was selected with the first overall pick in the 2003 NBA Draft by the Cavaliers. James led Cleveland to the franchise's first Finals appearance in 2007, losing to the San Antonio Spurs in a sweep. In 2010, he left the Cavaliers for the Heat in a highly publicized free agency period. In his first season in Miami, the Heat reached the Finals but lost to the Dallas Mavericks. James won his first championship in 2012 when Miami defeated the Oklahoma City Thunder, earning the Finals MVP Award for his play. In 2013, he led the Heat on a 27-game winning streak, the second longest in league history. Miami also won their second consecutive title and he repeated as Finals MVP. His career achievements and leadership role during Miami's 2012 and 2013 championship runs have led many basketball analysts to consider him the best player in the NBA today   more
4 votes
1 comment
LeBron James - Voter Comments

Kevin Wayne Durant is an American professional basketball player with the Oklahoma City Thunder of the National Basketball Association. Standing at 6 ft 9 in and weighing 240 pounds, he has played the small forward and power forward positions for th... e Thunder, formerly the Seattle SuperSonics. Durant has won three NBA scoring titles, the NBA Rookie of the Year Award, and an Olympic gold medal. He has also been selected to four All-NBA teams and five All-Star teams.Durant was a heavily recruited high school prospect. He attended the University of Texas for one season of college basketball, where he won numerous year-end awards and became the first ever freshman to be named Naismith College Player of the Year. In the 2007 NBA Draft, he was selected second overall by the SuperSonics. After his rookie season, the team moved to Oklahoma City and became the Thunder. Behind his play, the Thunder reached the 2012 NBA Finals, losing to the Miami Heat in five games. His career achievements have led many basketball analysts to consider him the second best player in the NBA today behind LeBron James.Off the court, Durant has accumulated considerable wealth as a result of numerous endorsement contracts. A well-liked player, he is a philanthropist who has donated money to various causes and is beloved in Oklahoma City for his kindness toward the community. In 2012, he starred in his first feature film, Thunderstruck   more
1 vote
0 comments
Kevin Durant - Voter Comments
No Comments
Vote & Comment
4

Hyland DeAndre Jordan, Jr. Is an American professional basketball center with the Los Angeles Clippers of the National Basketball Association. He played a year of college basketball at Texas A&M University. He was drafted by the Clippers with the 35... th overall pick in the 2008 NBA Draft. Before the draft, DeAndre was expected to be a mid-first round pick by many around the NBA   more
1 vote
0 comments
DeAndre Jordan - Voter Comments
No Comments
Vote & Comment
5

Kenneth Bernard Faried Lewis is an American professional basketball player who currently plays for the Denver Nuggets of the National Basketball Association. He was a center at Morehead State University, where he was named Ohio Valley Conference Pla... yer of the Year twice and an All-American in 2011   more
0 votes
0 comments
Kenneth Faried - Voter Comments
No Comments
Vote & Comment
6

Paul George is an American professional basketball swingman with the Indiana Pacers of the National Basketball Association. George played high school basketball for Pete Knight High School before playing two seasons of college basketball at Fresno S... tate. He was drafted by the Pacers as the 10th overall pick of the 2010 NBA draft. In 2013, he was selected to play in his first NBA All-Star Game, received the NBA Most Improved Player Award, and was named to All-NBA Third Team and All-Defensive Second Team   more
0 votes
0 comments
Paul George - Voter Comments
No Comments
Vote & Comment
No comments yet.
Leave a comment...
(Maximum 900 words)
Privacy Policy | Terms of Use
Sitemap | View Desktop Version
©2021 Debate.org. All rights reserved.