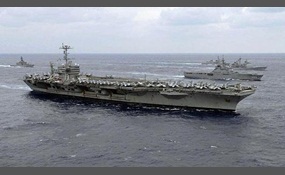 The United States spends more than the rest of the world combined on our military.

If we spent as much as the only super power that could really challenge us, that would free up enough money so the first $30,000 of income could be tax free. Should we spend less on the miltiary and tax Americans much less?

Spend less and give Americans a tax break.

dmussi12 says2014-07-11T21:16:02.2191696-05:00
Report Post
Best way is to reduce raw number of active personnel and get rid of a lot of our outdated vehicles, planes, and ships. Increase spending on researching/building low-maintenance vehicles to keep costs low in the future. For instance, there's a new destroyer that only has a crew of 130 (down from 364). Develop some of these and completely phase out the old ones.

dmussi12 says2014-07-11T21:29:52.0925157-05:00
Report Post
The problem with saying 'spend on education' is that school funding happens at the state level while defense is funded by the fed. However, I see that it wouldn't be hard to relocate that money with grants, or cut fed taxes and raise state ones. Or you could start paying off the federal deficit.

dmussi12 says2014-07-12T09:43:09.2137510-05:00
Report Post
@discomfiting Solar roadways are too expensive and not too efficient. Instead the money would be better spent on nuclear energy programs. If you're worried about safety, then perhaps some money should go into researching Generation IV reactors. @Haroush You're forgetting that we were involved in a 50 year Cold War with another superpower with a military almost as strong as ours. Not anymore. China? They spend nothing. Russia? Nothing. Even if both attacked us at once, we could literally flatten their cities in an instant. @ararmer I actually understand that we need people in turbulent areas, like the Middle East and Eastern Europe. We are protecting Europe's and China's oil supplies, not just our own, and someone needs to do it. I agree it should be us. However, that doesn't explain why we have so many troops stationed in Germany, Japan (I kind of understand Japan) the UK, and Italy. Or why we have over a million here, for that matter. http://www.cnn.com/interactive/2012/04/us/table.military.troops/ @Gogert Just because we can make money off of something doesn't mean it should be legalized. My compromise would to be stop jailing people for possession. Just fine them like $1000 (an arbitrary number) and increase it whenever they are caught again. Then we start making money off the war on drugs and clear up jails. Plus this isn't even relevant to the topic at hand. @1814 We do spend more on Social Security than Defense, so if we are serious about saving money, we need to make cuts across the board.
Privacy Policy | Terms of Use
Sitemap | View Desktop Version
©2020 Debate.org. All rights reserved.