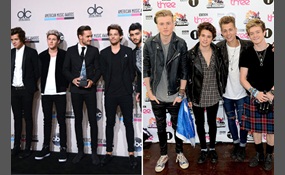 The Vamps or One Direction

I would choose The Vamps!

One Direction are a British pop boy band based in London, comprising Niall Horan, Zayn Malik, Liam Payne, Harry Styles and Louis Tomlinson. They signed with Simon Cowell's record label Syco Records after forming and finishing third in the seventh se... ries of the British televised singing competition The X Factor in 2010. Propelled to international success by social media, One Direction's four albums, Up All Night, Take Me Home, Midnight Memories and Four broke records, topped charts in most major markets, and generated hit singles including "What Makes You Beautiful", "Live While We're Young", "Story of My Life" and "Steal My Girl".Their achievements include four Brit Awards, four MTV Video Music Awards and eleven MTV Europe Music Awards among many others. According to Nick Gatfield, the chairman and chief executive of Sony Music Entertainment UK, One Direction represented a $50 million business empire by June 2012. They were proclaimed 2012's "Top New Artist" by Billboard. According to the Sunday Times Rich List, by April 2013, they had an estimated personal combined wealth of £25 million making them the second-wealthiest musicians in the UK under 30 years of age   more
5 votes
0 comments
One Direction - Voter Comments
No Comments
Vote & Comment
2

The Vamps are a British pop band consisting of Brad Simpson, James McVey, Connor Ball and Tristan Evans. They first gained fame in late 2012 with cover songs uploaded to YouTube, leading to comparisons with One Direction and being labeled as a boy b... and. They were signed to Mercury Records in November 2012.The Vamps supported McFly on their Memory Lane Tour in early 2013. They also performed at several festival-style events around the UK as support acts for bands such as the Wanted, JLS, Little Mix, Lawson and Demi Lovato.On 29 September 2013, the Vamps released their debut single "Can We Dance", which debuted at number two on the UK Singles Chart. Their second single "Wild Heart" was released on 18 January 2014 and peaked at number 3 on the UK Singles Chart. Their third single "Last Night" was released on the UK radio on 24 February 2014 and digital download on 6 April 2014. Their debut album Meet the Vamps was released on 14 April 2014. In February 2014, the Vamps released "Wild Heart" as their debut single in the United States and Canada   more
2 votes
0 comments
The Vamps - Voter Comments
No Comments
Vote & Comment
No comments yet.
Leave a comment...
(Maximum 900 words)
Privacy Policy | Terms of Use
Sitemap | View Desktop Version
©2020 Debate.org. All rights reserved.