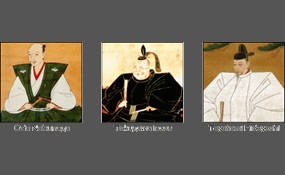 Toyotomi Hideyohsi vs Oda Nobunaga vs Tokugawa Ieyasu : Who would win?

Often reffered to as the "Three Unifiers of Japan" they helped end the century long Sengoku period. Now the question comes; who would win in a fight?

Oda Nobunaga was a powerful samurai daimyo and warlord of Japan in the late 16th century who initiated the unification of Japan near the end of the Warring States period. He lived a life of continuous military conquest, eventually conquering a third...  of Japan before his death in a 1582 coup. His successors were Toyotomi Hideyoshi, a loyal Oda supporter who would become the first man to unify all of Japan and was thus the first ruler of the whole country since the Ōnin War, and later Tokugawa Ieyasu, who would consolidate his rule under a shogunate, which ruled Japan until the Meiji Restoration in 1868   more
4 votes
2 comments
Oda Nobunaga - Voter Comments

Toyotomi Hideyoshi was a preeminent daimyo, warrior, general and politician of the Sengoku period who is regarded as Japan's second "great unifier." He succeeded his former liege lord, Oda Nobunaga, and brought an end to the Sengoku period. The peri... od of his rule is often called the Momoyama period, named after Hideyoshi's castle. After his death, his young son Hideyori was displaced by Tokugawa Ieyasu.Hideyoshi is noted for a number of cultural legacies, including the restriction that only members of the samurai class could bear arms. He financed the construction, restoration and rebuilding of many temples standing today in Kyoto. Hideyoshi played an important role in the history of Christianity in Japan when he ordered the execution by crucifixion of twenty-six Christians   more
0 votes
0 comments
Toyotomi Hideyoshi - Voter Comments
No Comments
Vote & Comment
4

Tokugawa Ieyasu was the founder and first shogun of the Tokugawa shogunate of Japan, which ruled from the Battle of Sekigahara in 1600 until the Meiji Restoration in 1868. Ieyasu seized power in 1600, received appointment as shogun in 1603, abdicate... d from office in 1605, but remained in power until his death in 1616. His given name is sometimes spelled Iyeyasu, according to the historical pronunciation of we. Ieyasu was posthumously enshrined at Nikkō Tōshō-gū with the name Tōshō Daigongen   more
0 votes
0 comments
Tokugawa Ieyasu - Voter Comments
No Comments
Vote & Comment
No comments yet.
Leave a comment...
(Maximum 900 words)
Privacy Policy | Terms of Use
Sitemap | View Desktop Version
©2020 Debate.org. All rights reserved.