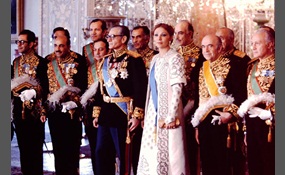 Was Iran "better off" under the Shah and thus not a theocratic state?

Is it just a coincidence that the leader of Iran is classified as a "Supreme Leader" and so is North Korea's leader?

Pahlavi brought great reforms for women, who could now cast off the chador veil and were encouraged to wear western dress. They were granted the right to vote, education was opened up to them, and an increasing number joined the work force. The Fami... ly Protection Act gave them greater rights such as allowing divorce and banning marriage under the age of 15. Iran remained a deeply religious nation of predominantly Shiite Muslims but the shah’s reforms encouraged an increasingly secular society. These reforms were welcomed by those who felt oppressed by religious dictates. Iranians enjoyed the luxury of new colleges, universities and libraries under the shah. Education was encouraged for the entire population. Secondary schools were free for all and financial support was extended to university students. An increasing number of boys and girls were sent to school, though females continued to have more limited access to higher education. The Literacy Corps was established to reduce illiteracy in rural areas, though reading and writing rates continued to be low in the villages. Nationalization of the oil industry, wresting it from British control, was a major boost to Iran’s economy, with greater job prospects for many, including women. Other reforms included the sale of state-owned enterprises to private interests and profit sharing in industry. Middle class Iranians could afford to buy their own apartment and travel abroad. It was Ruhollah Mostafavi Moosavi Khomeini, whose hatred of the West would dictate his every political move, even at the expense of the Iranian people. Once in power, Khomeini expelled virtually every hint of Western modernity for an Iranian “authenticity” as defined by an absolute zealot, and the West has since been left with a monolithic, fundamentalist regime more difficult to negotiate with than Mossadegh ever was   more
9 votes
4 comments
Yes (see description for possible reasons). - Voter Comments

No (see description for possible reasons).

In more traditional villages, however, the new laws were rarely enforced. While the banning of the veil was seen as liberation by educated females, rural women increasingly retreated to their homes, used to being hidden behind the garment. The relig... ious reforms were resoundingly rejected by the more traditional elements of Iran, who saw them as a threat to Islamic cultural values and identity. They led to a chasm between the monarchy and powerful Muslim clerics -- among them the popular Ayatollah Khomeini -- and would eventually lead to the Islamic Revolution of 1979. The oil wealth was unevenly distributed, and led to discontent among the nation's poorest, who were increasingly marginalized. By the late 1970s the economy began to struggle with rapid inflation and disaffected workers in both the public and private sector went on strike. Much of Iran still relied on agriculture. Land reforms redistributed properties to small farmers. While land owners raked in profits from sales, many sharecroppers failed to subsist on their own crops, let alone make a profit. Thus, the reforms often failed to improve life for those they intended to help. Trade with the West, which was curtailed after the revolution because of sanctions, was a boost to the economy. But some stall owners in the bazaars, the traditional focal point of Iranian life, complained that it unfairly took business away from local producers. The shah’s determination to showcase an increasingly liberal and modern front to the world was not matched by freedom of speech. Politically, he installed a succession of loyalist prime ministers. There was widespread censorship of the press, and the Savak security and intelligence organization became notorious for crushing dissent among political opponents. The crackdown on communists and Islamists led to many being imprisoned and tortured. Students began to take to the streets in protest   more
0 votes
0 comments
No (see description for possible reasons). - Voter Comments
No Comments
Vote & Comment
Leave a comment...
(Maximum 900 words)