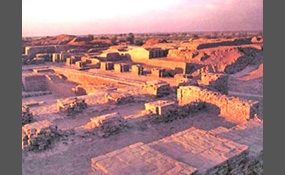 Was there an ancient civilization on earth at least as advanced as ours? If so, what is the best evidence for it?

The main pyramid of Giza is intriguing. It has practically no artwork inside, has unexpected chemical and physical properties, and archeologists continue to discover surprising facts about it. Taken together, the Nazca lines and the Palpa strips in Peru are impressive and mysterious. Yet one may question how much ancient megalithic sites like Stonehenge proves an ancient advanced civilization.

No, there was likely no civilization as advanced as ours. We have not found technology proving such a civilization, and ancient monuments and artifacts are better explained as impressive products of more primitive technology available at that time.
13 votes
5 comments
No. - Voter Comments

Joggabii says2014-06-02T00:52:42.3928343-05:00
Report Post
There wasn't. However, we consistently underestimate the technological and cultural prowess of our neolithic and ancient ancestors. Thousands of years before the pyramids were built, there was a civilization in ancient Anatolia that had cities with white plaster walls decorated with elaborate abstract patterns that exist in the region until this day, advanced burial rituals and even obsidian tools so advanced that we can't reproduce them today. The ice-man Ötzi, found in the Alps, had tattoos indicating that he had been treated with acapuncture that modern-day experts on acapuncture say is "ninety percent effective". There are reasons to believe that prehistoric Europeans carried out succesful surgery on many occasions, including primitive brain surgery that allowed patients to live for several more years. In ancient times, the Greeks had weapons that we still haven't been able to reproduce. The Romans had temples and palaces the likes of which we didn't see again in the world until the eighteenth century. They built a wall straight across the British isles with forts every few miles, and they had a highly-advanced army with weaponry so advanced that it wouldn't be seen again in Europe until the Renaissance. They had advanced medical procedures (even eye surgery and some brain surgery), central heating, bath houses and occasionally even running clean water. They were also known to use advanced methods of mining, allowing them to extract quantities of stone not unlike those extracted with enormous mining machines today. So: no, there was no magical civilization that had electricity and flying cars and all that, but we like to think of our ancestors as primitive and superstitious fools while they were probably much more innovative than we are.
Vote & Comment
2

Yes, Giza's pyramid or other pyramids prove it.

Yes, the Nazca and Palpa Lines Prove it.

The Sentinelese are an indigenous people of the Andaman Islands, in the Bay of Bengal. They inhabit North Sentinel Island, which lies westward off the southern tip of the Great Andaman archipelago. They are noted for resisting attempts at contact by...  outsiders. The Sentinelese maintain an essentially hunter-gatherer society subsisting through hunting, fishing, and collecting wild plants. There is no evidence of either agricultural practices or methods of producing fire. Their language remains unknown.The Sentinelese are a designated Scheduled Tribe   more
0 votes
0 comments
Sentinelese people - Voter Comments
No Comments
Vote & Comment
Leave a comment...
(Maximum 900 words)

rakovsky says2014-04-29T20:15:43.4117060-05:00
Report Post
At the least, I believe that the pyramid of Giza had a scientific purpose beyond being "just" a tomb, due to the chemical and structural nature of the pyramid, along with other very interesting facts about it, like its alignments. This is suggested by the underground chambers, the fact that practically no art or mummies were found inside, the broken blocks on top of the king's chamber along with the burn marks as if an explosion occurred, the types and size of stones used, the bevelling of the four sides into eight sides, the long narrow channels running out from the chambers, etc. I am not sure if this leads to the conclusion that their society was as advanced as ours or had other technology as modern as ours of which we are aware, but it is a very interesting idea.

Blade-of-Truth says2014-04-30T11:04:24.1866920-05:00
Report Post
Archaeologists have admitted that even by modern standards we don't have the means to reproduce some of the ancient buildings - including the precision found in the sharp angles, perfectly carved holes that are seemingly drilled through solid rock and then, of course, we have random hot spots of radiation that are all too evident of an ancient nuclear war that is even mentioned in the Bhagavad-gita. For me, there is too much evidence that says otherwise. Unfortunately, it is extremely hard to verify when history is written by the victors. Also, considering the government's official stance on history is matched with the dating influenced by Christian mythology (A.D., B.C. Which only allows us to go back so far), we cannot depend on science that is funded by federal grants, etc..., to provide any alternative theories. The best we will ever get is to enter the field ourselves and then hope that our discoveries are accepted as truth someday. We must keep in mind, that if we were the ones currently in power - and we are also in the role of giving the final word on such things, it wouldn't make sense to admit that such a society as advanced as ours existed in the past. We wish to keep the power, not give it away to the past for scrutiny or criticism. The first place I'd look, is at the latest discoveries the military made out in the caves of Afghanistan. As for the power of having the final say, a perfect example is UFO's. Several large countries, including America's allies such as Canada's own past defense minister, has admitted the existence of intelligent life that originates from other worlds. Yet, because America hasn't said the definitive Yes as a response to the big question - it still remains in doubt. Ultimately, what America says - is. This goes for both UFO's and the past of our own world.