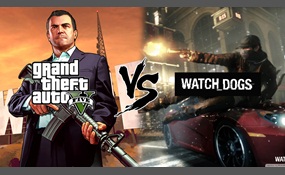 Which is better: GTA V or Watch Dogs

Grand Theft Auto V is an open world, action-adventure video game developed by Rockstar North and published by Rockstar Games. It was released on 17 September 2013 for the PlayStation 3 and Xbox 360, and is scheduled to be released in Q3/Q4 2014 for ... Microsoft Windows, PlayStation 4 and Xbox One. The game is the first main entry in the Grand Theft Auto series since 2008's Grand Theft Auto IV. Set within the fictional state of San Andreas, the single-player story follows three criminals and their efforts to commit heists while under pressure from a government agency. The open world design lets players freely roam San Andreas, which includes open countryside and the fictional city of Los Santos.The game is played from a third-person perspective and its world is navigated on-foot or by vehicle. Players control the three lead protagonists throughout the single-player mode, switching between them both during and outside of missions. The story is framed by the heist sequences, and many of the missions have shooting and driving gameplay   more
10 votes
1 comment
Grand Theft Auto V - Voter Comments

Watch Dogs is a 2014 open world action-adventure video game developed by Ubisoft Montreal and published by Ubisoft. It was released on 27 May 2014 for Microsoft Windows, the PlayStation 3, PlayStation 4, Xbox 360 and Xbox One, with a Wii U version p... lanned for release in the fourth quarter of 2014. Set within a fictionalized version of Chicago, Illinois, the single-player story follows a hacker and his efforts to seek revenge after the accidental death of his niece. The open world design lets players freely roam Chicago, which includes the urban city, open countryside, and slums. The game is played from a third-person perspective and its world is navigated on-foot or by vehicle. Players control Aiden Pearce, a highly skilled grey hat hacker who can hack into the "ctOS", a centralized operating system which manages the hyper-connected city of Chicago. Players can choose to play as criminals or vigilantes. An online multiplayer mode is also provided in the game, allowing up to eight players to engage in both cooperative and competitive gameplay in a recreation of the single-player setting. Development on the game began in 2009   more
6 votes
2 comments
Watch Dogs - Voter Comments

Nickman3422 says2014-10-14T18:02:06.6853162-05:00
Report Post
I think that watch dogs is better because the city is more dense, the IA is way better they can do more advanced actives like flying a toy airplane or jugging with a soccer ball
Vote & Comment
No comments yet.
Leave a comment...
(Maximum 900 words)
Privacy Policy | Terms of Use
Sitemap | View Desktop Version
©2021 Debate.org. All rights reserved.