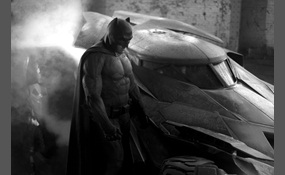 What actor would you rather have portary Batman aside from Ben Affleck?

I'll add another option if I get enough comments for it.

David Tennant is a Scottish actor known for his roles as the tenth incarnation of the Doctor in the British television series Doctor Who, as Giacomo Casanova in the TV serial Casanova and as Barty Crouch, Jr. In the film Harry Potter and the Goblet ... of Fire. In addition to his appearances on screen, Tennant has worked as a voice actor and appeared in a critically acclaimed stage production of Hamlet   more
3 votes
1 comment
David Tennant - Voter Comments

Matthew Paige "Matt" Damon is an American actor, voice actor, screenwriter, producer, and philanthropist. His career was launched with the success of his and Ben Affleck's award-winning screenplay, Good Will Hunting, for which he also received a num... ber of Best Actor nominations. Growing steadily in popularity since then, he is now among Forbes magazine's most bankable stars and one of the top-40 highest-grossing actors of all time. In addition to the many awards and nominations Damon has received, such as Academy, Golden Globe and other industry awards, for his work in the film industry—in 2007, Damon received a star on the Hollywood Walk of Fame and was named the Sexiest Man Alive by People magazine.Damon has become known for his versatility, starring in commercially and critically successful films such as the rogue secret agent Jason Bourne in the first three installments of the Bourne series, the youthful thief Linus Caldwell in the Ocean's Trilogy, the anti-hero in The Talented Mr. Ripley, a fallen angel in Dogma, a helpless private in Saving Private Ryan, and a conjoined twin in Stuck on You   more
3 votes
1 comment
Matt Damon - Voter Comments

James McAvoy is a Scottish actor. He made his acting debut as a teen in 1995's The Near Room and continued to make mostly television appearances until the late 2000s. His notable television work includes State of Play, Shameless, and Frank Herbert's...  Children of Dune. Besides screen acting, McAvoy has appeared on stage with Three Days of Rain in 2009 and as the title character in Macbeth in 2013. He has also done voice work for animated films including Gnomeo & Juliet and Arthur Christmas.In 2003, McAvoy appeared in Bollywood Queen which was followed by a supporting role in The Chronicles of Narnia: The Lion, the Witch and the Wardrobe. His performance in Kevin Macdonald's The Last King of Scotland garnered him several award nominations. 2007's critically acclaimed Atonement earned him a Golden Globe Award nomination and his second BAFTA nomination. He appeared opposite Angelina Jolie in Wanted. Since then, he is notable for playing Charles Xavier in the 2011 superhero film X-Men: First Class, a role he reprised in X-Men: Days of Future Past in 2014. McAvoy starred in the 2013 crime comedy-drama film Filth for which he won Best Actor in the British Independent Film Awards   more
0 votes
0 comments
James McAvoy - Voter Comments
No Comments
Vote & Comment
5

Edward John David "Eddie" Redmayne is an English actor, singer and model. Redmayne won an Olivier Award and a Tony Award for Best Supporting Actor for his performance in the stage production of Red. He also received the 2011 Critics' Circle Theatre ... Award for Best Shakespearean Performance for his portrayal of Richard II at London's Donmar Warehouse. On film, Redmayne has portrayed Marius Pontmercy in the musical Les Miserables and the physicist Stephen Hawking in the biographical romantic drama The Theory of Everything   more
0 votes
0 comments
Eddie Redmayne - Voter Comments
No Comments
Vote & Comment
6

Colin Andrew Firth CBE is an English film, television, and theatre actor. His films have earned more than $3 billion from 42 releases worldwide. He has received an Academy Award, a Golden Globe, two BAFTAs and three Screen Actors Guild Awards, as we... ll as the Volpi Cup. His most notable and acclaimed role to date has been his 2010 portrayal of King George VI in The King's Speech, a performance that gained him an Oscar and many other worldwide best actor awards. It went on to gross $414,211,549 worldwide.Identified in the late 1980s with the 'Brit Pack' of new young British actors headed by Gary Oldman, Firth's rise to stardom progressed at a slower pace than many of his contemporaries. It was not until his portrayal of Mr. Darcy in the 1995 television adaptation of Jane Austen's Pride and Prejudice that Firth became a household name. The show was a hit in the UK and USA and established him as a marquee talent. This led to roles in films such as The English Patient, Bridget Jones's Diary, Shakespeare in Love and Love Actually   more
0 votes
0 comments
Colin Firth - Voter Comments
No Comments
Vote & Comment
7

Alexander Rae "Alec" Baldwin III is an American actor, film producer and comedian who has appeared on film, stage and television. As a member of the Baldwin family, he is the oldest of the four Baldwin brothers, all well-known actors.Baldwin first g... ained recognition appearing on seasons 6 and 7 of the CBS television drama Knots Landing, in the role of Joshua Rush. He has since played both leading and supporting roles in films such as Beetlejuice, The Hunt for Red October, The Marrying Man, The Shadow, The Aviator and The Departed. His performance in the 2003 film The Cooler garnered him a nomination for the Academy Award for Best Supporting Actor.From 2006 to 2013, he starred as Jack Donaghy on the NBC sitcom 30 Rock, receiving critical acclaim for his performance and winning two Emmy Awards, three Golden Globe Awards and seven Screen Actors Guild Awards for his work on the show, making him the male performer with the most SAG Awards.Baldwin is a columnist for The Huffington Post. He was host of MSNBC's Up Late with Alec Baldwin, which lasted for five episodes until he was fired on November 26, 2013   more
0 votes
0 comments
Alec Baldwin - Voter Comments
No Comments
Vote & Comment
No comments yet.
Leave a comment...
(Maximum 900 words)
Privacy Policy | Terms of Use
Sitemap | View Desktop Version
©2020 Debate.org. All rights reserved.