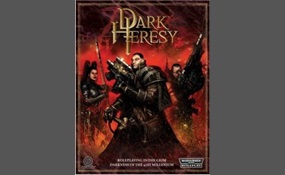 What archetype are you? (Role-playing games)

Choose the one you're closest too.

The Roleplayer is the Tabletop RPG player who plays mainly to create a character and tell a story. Most of them aren't too concerned with Min-Maxing - their abilities are based more on whether they fit their conception of the character than pure com... bat effectiveness   more
5 votes
1 comment
The Roleplayer - Voter Comments

TheChainedKing says2015-10-01T11:11:01.1985339Z
Report Post
If I pick a character I do my best to fit the role of that character. Usually my character does not believe that winning 100% of the time is essential to success but that experience is what matters.
Vote & Comment
2

The Loonie is the Tabletop RPG player who plays mostly for the fun of doing silly things within the game. He typically optimizes his character for comedy rather than combat, and is more likely to pick "goofy" character races purely for the novelty (... such as awakened animals, Kender, Malkavians, and so forth). His abilities will be mainly based on their potential for wacky antics (so rogues and mages with a lot of illusion and enchantment spells are popular)   more
2 votes
2 comments
The Loonie - Voter Comments

The Real Man is the Tabletop RPG player who plays the game for the visceral, action-packed experience. Any character played by this guy will invariably be a badass whirlwind of death — rarely do they play any sort of sneaky or supporting character. ... If by chance they have to play a wizard, he'll either be loaded to the gills with fireballs or decidedly non-squishy. The real man may do some Min-Maxing (though not to the insane heights of the Munchkin), but he's just as likely to select abilities based on "cool factor" alone   more
2 votes
0 comments
The Real Man - Voter Comments
No Comments
Vote & Comment
4

The Munchkin is the Tabletop RPG player who plays the game to win at any cost, even if that isn't the point of the game. Perhaps the most ridiculed Player Archetype of all time, this player is rarely interested in the story behind the game. Indeed, ... his characters are little more than extensions of his own personality or whatever personality would give him the most bonuses   more
0 votes
0 comments
The Munchkin - Voter Comments
No Comments
Vote & Comment
Leave a comment...
(Maximum 900 words)