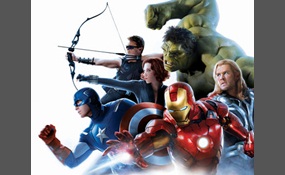 What Avengers character is the best?

Captain America is a 1990 superhero film directed by Albert Pyun. The film is based on the Marvel Comics superhero of the same name. While the film takes several liberties with the comic's storyline, it features Steve Rogers becoming Captain America...  during World War II to battle the Red Skull, being frozen in ice, and subsequently being revived to save the President of the United States from a crime family that dislikes his environmentalist policies. The film received a PG-13 rating from the Motion Picture Association of America   more
13 votes
2 comments
Captain America - Voter Comments

Iron Man is a 2008 American superhero film based on the Marvel Comics character of the same name, produced by Marvel Studios and distributed by Paramount Pictures. It is the first installment in the Marvel Cinematic Universe. Directed by Jon Favreau...  and written by Mark Fergus and Hawk Ostby, Art Marcum and Matt Holloway, the film stars Robert Downey, Jr., Terrence Howard, Jeff Bridges, Shaun Toub and Gwyneth Paltrow. The film sees Tony Stark, an industrialist and master engineer, build a powered exoskeleton and becomes the technologically advanced superhero Iron Man.The film had been in development since 1990 at Universal Pictures, 20th Century Fox, and New Line Cinema, before Marvel Studios reacquired the rights in 2006. Marvel put the project in production as its first self-financed film, with Paramount Pictures as its distributor. Favreau signed on as director, aiming for a naturalistic feel, and he chose to shoot the film primarily in California, rejecting the East Coast setting of the comics to differentiate the film from numerous superhero films set in New York City-esque environments. During filming, the actors were free to create their own dialogue because pre-production was focused on the story and action. Rubber and metal versions of the armors, created by Stan Winston's company, were mixed with computer-generated imagery to create the title character. Hasbro and Sega sold merchandise, and product placement deals were made with Audi, Burger King, LG and 7-Eleven   more
9 votes
1 comment
Iron Man - Voter Comments

The Hulk is a fictional superhero that appears in comic books published by Marvel Comics. The character was created by Stan Lee and Jack Kirby, and first appeared in The Incredible Hulk #1. Throughout his comic book appearances, the Hulk is portraye... d as a large green humanoid that possesses near limitless superhuman strength and great invulnerability, attributes that grow more potent the angrier he becomes. Hulk is the alter ego of Bruce Banner, a socially withdrawn and emotionally reserved physicist who physically transforms into the Hulk under emotional stress and other specific circumstances at will or against it; these involuntary transformations lead to many complications in Banner's life. When transformed, the Hulk often acts as a disassociated personality separate from Banner. Over the decades of Hulk stories, the Hulk has been represented with several different personalities based on Hulk and Banner's fractured psyche, ranging from mindless savage to brilliant warrior, and Banner has taken control of the Hulk's form on occasion. Banner first transforms into the Hulk after being caught in the blast of the gamma bomb he invented while saving Rick Jones, a youth who had wandered onto the testing range   more
4 votes
1 comment
Hulk - Voter Comments

Thor is a 2011 American superhero film based on the Marvel Comics character of the same name, produced by Marvel Studios and distributed by Paramount Pictures. It is the fourth installment in the Marvel Cinematic Universe. The film was directed by K... enneth Branagh, written by Ashley Edward Miller, Zack Stentz and Don Payne, and stars Chris Hemsworth, Natalie Portman, Tom Hiddleston, Stellan Skarsgård, Colm Feore, Ray Stevenson, Idris Elba, Kat Dennings, Rene Russo and Anthony Hopkins. The film tells the story of Thor, the crown prince of Asgard, who is exiled from his homeland to Earth. While there, he forms a relationship with Jane Foster, a scientist. However, Thor must stop his adopted brother Loki, who intends to become the new king of Asgard.Sam Raimi first developed the concept of a film adaptation of Thor in 1991, but soon abandoned the project, leaving it in "development hell" for several years. During this time, the rights were picked up by various film studios until Marvel Studios signed Mark Protosevich to develop the project in 2006, and planned to finance it and release it through Paramount Pictures. Matthew Vaughn was originally assigned to direct the film for a tentative 2010 release. However, after Vaughn was released from his holding deal in 2008, Branagh was approached and the film's release was rescheduled into 2011. The main characters were cast in 2009, and principal photography took place in California and New Mexico from January to May 2010. The film was converted to 3D in post-production   more
2 votes
0 comments
Thor - Voter Comments
No Comments
Vote & Comment
6

Hawkeye is a fictional character, a comic book superhero that appears in comic books published by Marvel Comics. Created by writer Stan Lee and artist Don Heck, the character first appeared as a villain in Tales of Suspense #57 and later joined the ... Avengers in Avengers #16. He has been a prominent member of the team ever since. He was also ranked at #44 on IGN's Top 100 Comic Book Heroes list.Hawkeye is portrayed by Jeremy Renner in the Marvel Cinematic Universe, a shared fictional universe that is the setting of films produced by Marvel Studios. Renner first made an uncredited cameo appearance as Hawkeye in Thor and later reprised the role in The Avengers; he is set to return to the role a third time in Avengers: Age of Ultron   more
0 votes
0 comments
Hawkeye - Voter Comments
No Comments
Vote & Comment
Leave a comment...
(Maximum 900 words)