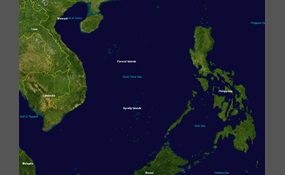 What countries' territorial claim to the Spratly Islands do you support the most?

The Philippines, officially known as the Republic of the Philippines, is a sovereign island country in Southeast Asia situated in the western Pacific Ocean. It consists of 7,107 islands that are categorized broadly under three main geographical divi... sions: Luzon, Visayas, and Mindanao. Its capital city is Manila while its most populous city is Quezon City; both are part of Metro Manila.To the north of the Philippines across the Luzon Strait lies Taiwan; Vietnam sits west across the South China Sea; southwest is the island of Borneo across the Sulu Sea, and to the south the Celebes Sea separates it from other islands of Indonesia; while to the east it is bounded by the Philippine Sea and the island-nation of Palau. Its location on the Pacific Ring of Fire and close to the equator makes the Philippines prone to earthquakes and typhoons, but also endows it with abundant natural resources and some of the world's greatest biodiversity. At approximately 300,000 square kilometers, the Philippines is the 64th-largest country in the world   more
2 votes
0 comments
Philippines - Voter Comments
No Comments
Vote & Comment
3

Vietnam, officially the Socialist Republic of Vietnam, is the easternmost country on the Indochina Peninsula in Southeast Asia. With an estimated 90.0 million inhabitants as of 2013, it is the world's 13th-most-populous country, and the eighth-most-... populous Asian country. The name Vietnam translates as "Southern Viet"; it was first officially adopted in 1802 by Emperor Gia Long, and was adopted again in 1945 with the founding of the Democratic Republic of Vietnam under Ho Chi Minh. The country is bordered by China to the north, Laos to the northwest, Cambodia to the southwest, and the South China Sea to the east. Its capital city has been Hanoi since the reunification of North and South Vietnam in 1976.Vietnam was part of Imperial China for over a millennium, from 111 BC to 938 AD. The Vietnamese became independent from Imperial China in AD 938, following the Vietnamese victory in the Battle of Bạch Đằng River. Successive Vietnamese royal dynasties flourished as the nation expanded geographically and politically into Southeast Asia, until the Indochina Peninsula was colonized by the French in the mid-19th century   more
2 votes
1 comment
Vietnam - Voter Comments

China, officially the People's Republic of China, is a sovereign state located in East Asia. It is the world's most populous country, with a population of over 1.35 billion. The PRC is a single-party state governed by the Communist Party, with its s... eat of government in the capital city of Beijing. It exercises jurisdiction over 22 provinces, five autonomous regions, four direct-controlled municipalities, and two mostly self-governing special administrative regions. The PRC also claims the territories governed by the Republic of China, a separate political entity commonly known as Taiwan today, as a part of its territory, which includes the island of Taiwan as Taiwan Province, Kinmen and Matsu as a part of Fujian Province and islands the ROC controls in the South China Sea as a part of Hainan Province, a claim which is controversial due to the complex political status of Taiwan.Covering approximately 9.6 million square kilometers, China is the world's second-largest country by land area, and either the third or fourth-largest by total area, depending on the method of measurement   more
1 vote
1 comment
China - Voter Comments

Taiwan, officially the Republic of China, is a sovereign state in East Asia. The Republic of China, originally based in mainland China, now governs the island of Taiwan, which makes up over 99% of its territory, as well as Penghu, Kinmen, Matsu, and...  other minor islands. Neighboring states include the People's Republic of China to the west, Japan to the east and northeast, and the Philippines to the south. Taipei is the seat of the central government. New Taipei, encompassing the metropolitan area surrounding Taipei proper, is the most populous city.The island of Taiwan was mainly inhabited by Taiwanese aborigines until the Dutch and Spanish settlement during the Age of Discovery in the 17th century, when Han Chinese began immigrating to the island. In 1662, the pro-Ming loyalist Koxinga expelled the Dutch and established the first Han Chinese polity on the island, the Kingdom of Tungning. The Qing Dynasty of China later defeated the kingdom and annexed Taiwan. By the time Taiwan was ceded to Japan in 1895, the majority of Taiwan's inhabitants were Han Chinese either by ancestry or by assimilation. The Republic of China was established in China in 1912   more
0 votes
0 comments
Taiwan - Voter Comments
No Comments
Vote & Comment
6

Malaysia is a federal constitutional monarchy located in Southeast Asia. It consists of thirteen states and three federal territories and has a total landmass of 329,847 square kilometres separated by the South China Sea into two similarly sized reg... ions, Peninsular Malaysia and East Malaysia. Peninsular Malaysia shares a land and maritime border with Thailand and maritime borders with Singapore, Vietnam, and Indonesia. East Malaysia shares land and maritime borders with Brunei and Indonesia and a maritime border with the Philippines. The capital city is Kuala Lumpur, while Putrajaya is the seat of the federal government. In 2010 the population was 28.33 million, with 22.6 million living in Peninsular Malaysia. The southernmost point of continental Eurasia, Tanjung Piai, is in Malaysia, located in the tropics. It is one of 17 megadiverse countries on earth, with large numbers of endemic species.Malaysia has its origins in the Malay Kingdoms present in the area which, from the 18th century, became subject to the British Empire. The first British territories were known as the Straits Settlements, whose establishment was followed by the Malay kingdoms becoming British protectorates   more
0 votes
0 comments
Malaysia - Voter Comments
No Comments
Vote & Comment
7

Brunei officially the Nation of Brunei, the Abode of Peace, is a sovereign state located on the north coast of the island of Borneo in Southeast Asia. Apart from its coastline with the South China Sea, it is completely surrounded by the state of Sar... awak, Malaysia; and it is separated into two parts by the Sarawak district of Limbang. It is the only sovereign state completely on the island of Borneo; the remainder of the island's territory is divided between the nations of Malaysia and Indonesia. Brunei's population was 408,786 in July 2012.At the peak of Bruneian Empire, Sultan Bolkiah is alleged to have had control over most regions of Borneo, including modern-day Sarawak and Sabah, as well as the Sulu archipelago off the northeast tip of Borneo, Seludong, and the islands off the northwest tip of Borneo. The maritime state was visited by Spain's Magellan Expedition in 1521 and fought against Spain in 1578's Castille War.During the 19th century the Bruneian Empire began to decline. The Sultanate ceded Sarawak to James Brooke and installed him as the White Rajah, and it ceded Sabah to the British North Borneo Chartered Company   more
0 votes
0 comments
Brunei - Voter Comments
No Comments
Vote & Comment
Leave a comment...
(Maximum 900 words)

Christopher_Carpenter says2015-08-23T19:24:02.4541020Z
Report Post
Petersmith, Manifest Destiny was a societal belief that the United States should spread its culture and influence across North America, due in part because the other two North American Countries (Canada and Mexico) were also expanding. Its focus was North America, when the United States claimed the Philipine Islands, Guam, and Puerto Rico after the end of the Spanish-American War, it was extremely controversial as many thought it violated the Manifest Destiny.