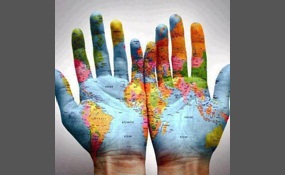 What country are you from?

Australia, officially the Commonwealth of Australia, is a country comprising the mainland of the Australian continent, the island of Tasmania, and numerous smaller islands. It is the world's sixth-largest country by total area. Neighbouring countrie... s include Indonesia, East Timor and Papua New Guinea to the north; the Solomon Islands and Vanuatu to the north-east; and New Zealand to the south-east.For at least 40,000 years before the first British settlement in the late 18th century, Australia was inhabited by indigenous Australians, who spoke languages grouped into roughly 250 language groups. After the European discovery of the continent by Dutch explorers in 1606, Australia's eastern half was claimed by Great Britain in 1770 and initially settled through penal transportation to the colony of New South Wales from 26 January 1788. The population grew steadily in subsequent decades; the continent was explored and an additional five self-governing Crown Colonies were established.On 1 January 1901, the six colonies federated, forming the Commonwealth of Australia   more
2 votes
0 comments
Australia - Voter Comments
No Comments
Vote & Comment
4

Hungary is a landlocked country in Central Europe. It is situated in the Carpathian Basin and is bordered by Slovakia to the north, Ukraine and Romania to the east, Serbia and Croatia to the south, Slovenia to the southwest and Austria to the west. ... The country's capital and largest city is Budapest. Hungary is a member of the European Union, NATO, the OECD, the Visegrád Group, and the Schengen Area. The official language is Hungarian, which is the most widely spoken non-Indo-European language in Europe.Following centuries of successive habitation by Celts, Romans, Huns, Slavs, Gepids, and Avars, the foundation of Hungary was laid in the late 9th century by the Hungarian grand prince Árpád in the Honfoglalás. His great-grandson Stephen I ascended to the throne in 1000 AD, converting the country to a Christian kingdom. By the 12th century, Hungary became a middle power within the Western world. Following the Battle of Mohács in 1526, Medieval Hungary collapsed and succumbed to 150 years of partial Ottoman occupation. Hungary eventually came under Habsburg rule, and later formed a significant part of the Austro–Hungarian Empire   more
1 vote
0 comments
Hungary - Voter Comments
No Comments
Vote & Comment
7

Scotland is a country that is part of the United Kingdom. Occupying the northern third of the island of Great Britain, Scotland shares a border with England to the south, and is otherwise surrounded by the Atlantic Ocean; with the North Sea to the e... ast, and the North Channel and Irish Sea to the south-west. In addition to the mainland, the country is made up of more than 790 islands, including the Northern Isles and the Hebrides.Edinburgh, the country's capital and second-largest city, was the hub of the Scottish Enlightenment of the 18th century, which transformed Scotland into one of the commercial, intellectual, and industrial powerhouses of Europe. Glasgow, Scotland's largest city, was once one of the world's leading industrial cities and now lies at the centre of the Greater Glasgow conurbation. Scottish waters consist of a large sector of the North Atlantic and the North Sea, containing the largest oil reserves in the European Union. This has given Aberdeen, the third-largest city in Scotland, the title of Europe's oil capital.The Kingdom of Scotland emerged as an independent sovereign state in the Early Middle Ages and continued to exist until 1707   more
1 vote
0 comments
Scotland - Voter Comments
No Comments
Vote & Comment
9

Mauritius, officially the Republic of Mauritius, is an island nation in the Indian Ocean about 2,000 kilometres off the southeast coast of the African continent. The country includes the island of Mauritius, Rodrigues, the islands of Agalega and the...  archipelago of Saint Brandon. The islands of Mauritius, Rodrigues, and Réunion 170 km south west, form part of the Mascarene Islands. The area of the country is 2040 km². The capital and largest city is Port Louis.Mauritius claims sovereignty over the Chagos Archipelago from the United Kingdom and Tromelin island from France. The United Kingdom excised the Chagos Archipelago from Mauritian territory prior to its independence in 1965, the UK gradually depopulated its indigenous population and leased the biggest island Diego Garcia to the United States who establish a military base on it.The island of Mauritius was visited during the medieval period by the Arabs and then by the Portuguese, who named it Dina Arobi and Cirne, respectively. The island was uninhabited until the Dutch Republic established a colony in 1638, with the Dutch naming the island after Prince Maurice van Nassau   more
1 vote
0 comments
Mauritius - Voter Comments
No Comments
Vote & Comment
11

Norway, officially the Kingdom of Norway, is a Scandinavian unitary constitutional monarchy whose territory comprises the western portion of the Scandinavian Peninsula, Jan Mayen, the Arctic archipelago of Svalbard, and the sub-Antarctic Bouvet Isla... nd. Peter I Island is a dependent territory and thus not considered part of the Kingdom. Norway also lays claim to a section of Antarctica known as Queen Maud Land. Norway has a total area of 385,252 square kilometres and a population of 5,109,059 people. The country shares a long eastern border with Sweden. Norway is bordered by Finland and Russia to the north-east, and the Skagerrak Strait to the south, with Denmark on the other side. Norway has an extensive coastline, facing the North Atlantic Ocean and the Barents Sea.King Harald V of the House of Schleswig-Holstein-Sonderburg-Glücksburg is the current monarch of Norway. Erna Solberg became Prime Minister in 2013, replacing Jens Stoltenberg. A constitutional monarchy since 1814, state power is divided between the Parliament, the King and his Council, and the Supreme Court   more
1 vote
0 comments
Norway - Voter Comments
No Comments
Vote & Comment
12

China, officially the People's Republic of China, is a sovereign state located in East Asia. It is the world's most populous country, with a population of over 1.35 billion. The PRC is a single-party state governed by the Communist Party, with its s... eat of government in the capital city of Beijing. It exercises jurisdiction over 22 provinces, five autonomous regions, four direct-controlled municipalities, and two mostly self-governing special administrative regions. The PRC also claims the territories governed by Taiwan, the separate political entity officially known as the Republic of China, as its 23rd province, a claim which is controversial due to the complex political status of Taiwan.Covering approximately 9.6 million square kilometers, China is the world's second-largest country by land area, and either the third or fourth-largest by total area, depending on the method of measurement. China's landscape is vast and diverse, ranging from forest steppes and the Gobi and Taklamakan deserts in the arid north to subtropical forests in the wetter south. The Himalaya, Karakoram, Pamir and Tian Shan mountain ranges separate China from South and Central Asia   more
1 vote
1 comment
China - Voter Comments

Taiwan, officially the Republic of China, is a sovereign state in East Asia. The Republic of China, originally based in mainland China, now governs the island of Taiwan, which makes up over 99% of its territory, as well as Penghu, Kinmen, Matsu, and...  other minor islands. Neighboring states include the People's Republic of China to the west, Japan to the east and northeast, and the Philippines to the south. Taipei is the seat of the central government. New Taipei, encompassing the metropolitan area surrounding Taipei proper, is the most populous city.The island of Taiwan was mainly inhabited by Taiwanese aborigines until the Dutch and Spanish settlement during the Age of Discovery in the 17th century, when Han Chinese began immigrating to the island. In 1662, the pro-Ming loyalist Koxinga expelled the Dutch and established the first Han Chinese polity on the island, the Kingdom of Tungning. The Qing Dynasty of China later defeated the kingdom and annexed Taiwan. By the time Taiwan was ceded to Japan in 1895, the majority of Taiwan's inhabitants were Han Chinese either by ancestry or by assimilation. The Republic of China was established in China in 1912   more
1 vote
0 comments
Taiwan - Voter Comments
No Comments
Vote & Comment
14

The Netherlands is the main constituent country of the Kingdom of the Netherlands. It is a small, densely populated country, lying mainly in Western Europe, but also including three islands in the Caribbean. The European part of the Netherlands bord... ers Germany to the east, Belgium to the south, and the North Sea to the northwest, sharing maritime borders with Belgium, the United Kingdom and Germany. The four largest and most important cities in the Netherlands are Amsterdam, The Hague, Rotterdam and Utrecht. Amsterdam is the country's capital, while The Hague holds the Dutch seat of government. The port of Rotterdam is the largest port in Europe – as large as the next three largest combined. The Dutch economy is the world's 16th largest by nominal GDP.The Netherlands' name literally means "Low Country", inspired by its low and flat geography, with only about 50% of its land exceeding one metre above sea level. Most of the areas below sea level are man-made. Since the late 16th century, large areas have been reclaimed from the sea and from lakes, amounting to nearly 17% of the country's current land mass   more
1 vote
0 comments
Netherlands - Voter Comments
No Comments
Vote & Comment
15

In many mythological, folklore and religious traditions, hell is a place of eternal torment in an afterlife, often after resurrection. It is viewed by most Abrahamic traditions as a place of punishment. Religions with a linear divine history often d... epict hells as eternal destinations. Religions with a cyclic history often depict a hell as an intermediary period between incarnations. Typically these traditions locate hell in another dimension or under the Earth's surface and often include entrances to Hell from the land of the living. Other afterlife destinations include Heaven, Purgatory, Paradise, and Limbo.Other traditions, which do not conceive of the afterlife as a place of punishment or reward, merely describe hell as an abode of the dead, a neutral place located under the surface of Earth. Modern understandings of hells often depict them abstractly, as a state of loss rather than as fiery torture literally underground, but this view of the concept of a hell can, in fact, be traced back into the ancient and medieval periods as well. Hell is sometimes portrayed as populated with demons who torment those dwelling there   more
0 votes
0 comments
Hell - Voter Comments
No Comments
Vote & Comment
Leave a comment...
(Maximum 900 words)

lifemeansevolutionisgood says2014-07-15T16:03:12.3455094-05:00
Report Post
Preston, it is a group of people trying to make a one world government. Everyone in the group identifies that as their nationality. If it succeeds, there is one world government, and that pretty much makes it one "country".

Preston says2015-08-27T13:52:41.5097163Z
Report Post
Life, a country is an organization on a territory. A government is an entity ruling over a people. You are saying you are from the country (Territory of):First Republic of Earth. Which is not ruling over any territory thus contradicting itself.
Privacy Policy | Terms of Use
Sitemap | View Desktop Version
©2020 Debate.org. All rights reserved.