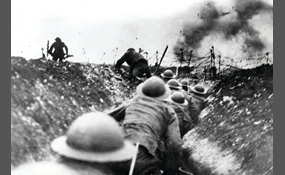 What country has the strongest millatary in WW1?

The German Empire was the historical German nation state that existed from the unification of Germany in 1871 to the abdication of Kaiser Wilhelm II in November 1918, when Germany became a federal republic. During its entire existence, the only war ... the German Empire fought, World War I, also led to its end. The state was the predecessor of today's Germany. The Empire is sometimes called the German Reich.The German Empire consisted of 27 constituent territories. While the Kingdom of Prussia contained most of the population and most of the territory of the empire, the Prussian leaders were supplanted by leaders from all over Germany, and Prussia itself played a lesser role. As Dwyer points out, Prussia's "political and cultural influence had diminished considerably" by the 1890s. The German Empire's three largest neighbours were all rivals: Imperial Russia to the east, France to the west, and Austria-Hungary, a rival but also an ally, to the south-east.After 1850, the states of Germany had rapidly become industrialized, with particular strengths in coal, iron, chemicals, and railways   more
13 votes
5 comments
German Empire - Voter Comments

Rhodesia79 says2015-05-01T12:18:09.2085245-05:00
Report Post
Were able to not only hold two fronts at once while outnumbered but also advance and take territory, plus sending reinforcement troops to the equally sized nation of Austria-Hungary who were being pushed back and defeat their enemy and go back to continue fighting on the German front. Germany also sent troops to their colony of German East Africa where 15,000 German troops held off 250,000 Allied forces for the duration of the War.

dbushwacker says2015-05-01T13:27:38.7739926-05:00
Report Post
By far had the strongest military; but ignorance to methods of modern warfare, the occurrence of many brutal setbacks, and the lack of technological innovations like the tank would be its end. Such as, in the first encounter between British and German troops, 500 Germans were cut down in 5 minutes by machine guns and British Fusiliers

The United Kingdom of Great Britain and Northern Ireland, commonly known as the United Kingdom or Britain, is a sovereign state in Europe. Lying off the north-western coast of the European mainland, the country includes the island of Great Britain, ... the north-eastern part of the island of Ireland, and many smaller islands. Northern Ireland is the only part of the UK that shares a land border with another state: the Republic of Ireland. Apart from this land border, the UK is surrounded by the Atlantic Ocean, with the North Sea in the east and the English Channel in the south. The Irish Sea lies between Great Britain and Ireland. The UK has an area of 243,610 square kilometres, making it the 78th-largest sovereign state in the world and the 11th-largest in Europe.The United Kingdom is the 22nd-most populous country, with an estimated 64.1 million inhabitants. It is a constitutional monarchy with a parliamentary system of governance. Its capital city is London, an important global city and financial centre with the second-largest urban area in Europe, and its metropolitan area is the largest in European Union, with a population of about 14 million according Eurostat   more
4 votes
2 comments
United Kingdom - Voter Comments

Real_ism says2015-12-06T21:36:02.3536189Z
Report Post
While Germany had a great army with strong talented commanders and damn fine rifles, Britian ruled the sea and used it to blockade Germany having a withering affect on the dormant German economy.
Vote & Comment
3

The Russian Empire was a state that existed from 1721 until overthrown by the short-lived liberal February Revolution in 1917. One of the largest empires in world history, stretching over three continents, the Russian Empire was surpassed in landmas... s only by the British and Mongol empires. It played a major role in 1812–14 in defeating Napoleon's ambitions to control Europe, and expanded to the west and south. It was often in conflict with the Ottoman Empire.At the beginning of the 19th century, the Russian Empire extended from the Arctic Ocean in the north to the Black Sea on the south, from the Baltic Sea on the west to the Pacific Ocean, and into Alaska in North America on the east. With 125.6 million subjects registered by the 1897 census, it had the third largest population in the world at the time, after Qing China and the British Empire. Like all empires, it included a large disparity in terms of economics, ethnicity, and religion. There were numerous dissident elements, who launched numerous rebellions and assassination attempts; they were closely watched by the secret police, with thousands exiled to Siberia   more
2 votes
0 comments
Russian Empire - Voter Comments
No Comments
Vote & Comment
4

France, officially the French Republic, is a unitary sovereign state comprising territory in western Europe and several overseas regions and territories. Metropolitan France extends from the Mediterranean Sea to the English Channel and the North Sea... , and from the Rhine to the Atlantic Ocean; due to its shape, it is often referred to in French as l’Hexagone. France is one of only three countries to have both Atlantic and Mediterranean coastlines. France has a population of 66 million. France is a semi-presidential republic with its capital in Paris, the nation's largest city and the main cultural and commercial center. The Constitution of France establishes the country as secular and democratic, with its sovereignty derived from the people.During the Iron Age, what is now France was inhabited by the Gauls, a Celtic people. The Gauls were conquered by the Roman Empire in 51 BC, which held Gaul until 486. The Gallo-Romans faced raids and migration from the Germanic Franks, who dominated the region for hundreds of years, eventually creating the medieval Kingdom of France   more
0 votes
0 comments
France - Voter Comments
No Comments
Vote & Comment
5

Austria-Hungary, also known as the Austro-Hungarian Empire and by other names, was a constitutional union of the Empire of Austria and the Apostolic Kingdom of Hungary that existed from 1867 to 1918, when it collapsed as a result of defeat in World ... War I. The union was a result of the Compromise of 1867. It was ruled by the House of Habsburg, and constituted the last phase in the constitutional evolution of the Habsburg Monarchy. Following the 1867 reforms, the Austrian and the Hungarian states were co-equal within the Empire. The Compromise required regular renewal, as did the customs union between the two halves of the Empire. Foreign affairs and the military fell under joint control, but all other government faculties were divided between the respective states.Austria-Hungary was a multinational realm and one of the world's great powers. Austria-Hungary was geographically the second-largest country in Europe after the Russian Empire, at 621,538 km², and the third-most populous. The Empire built up the fourth-largest machine building industry of the world, after the United States, Germany, and Britain   more
0 votes
0 comments
Austria-Hungary - Voter Comments
No Comments
Vote & Comment
Leave a comment...
(Maximum 900 words)

58539672 says2015-12-07T04:47:56.3809011Z
Report Post
I think people over estimate Germany in WW1 because of their accomplishments in WW2. The Schlieffen plan had close to a 0% chance of actually working and, like many of the nations involved, Germany didn't learn from the Russo-Japanese war and the American Civil war that warfare had changed drastically (contrary to what Fallout may tell you).
Privacy Policy | Terms of Use
Sitemap | View Desktop Version
©2020 Debate.org. All rights reserved.