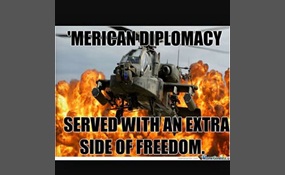 What country is Americas next victim?

The USA has a past of aggressive and rather unfounded invasions/bombings of other countries. Following the bombing of Syria witch country do you think is next to suffer the wrath of MURCIA?

Its bad... And has NUKES that may or may not be able to fire and destroy the land of the Free (MURICA) so its time some one puts them in their place.
5 votes
1 comment
North Korea - Voter Comments

Did you know Iran has a well functioning nuclear program and will soon launch multiple warheads at the home land (MURCIA) and destroy the civilized world! Unless America steps in first and puts an end to this madness and restores freedom and democra... cy to the world   more
4 votes
1 comment
Iran - Voter Comments

Some moose wandered over the US/Canada border yesterday. They caused minor destruction and Canada failed to claim responsibility war may be near. (they also have lots of oil)
2 votes
1 comment
Canada - Voter Comments

CyberConor says2015-04-14T18:49:29.8804866-05:00
Report Post
Canada has continued to let their moose cross our border. They have attack us with the bierberian Bomb, also know as the Justin Bieber, being liberals, and you know, oil. Like, any country with oil we attack for some reason XD
Vote & Comment
4

Due to a reason poll 100.1% of Ukrainians voted for Freedom meanwhile Russian T-90s have stormed Kiev. Some won has to stand up for freedom here.
2 votes
0 comments
Ukraine - Voter Comments
No Comments
Vote & Comment
5

Yemen is hiding huge oil reserves from the world community (MURCIA). It is highly recommended they join the rest of the gulf supplying the west with oil. If they they fail to do so it would not only threaten the world economic but freedom its self...  so if it fails to act America would be forced to intervene in the name of freedom   more
1 vote
0 comments
Yemen - Voter Comments
No Comments
Vote & Comment
6

It is in the middle east and has been a threat to Israel for the last 100 years it also represses many ethnic kurds and its time it picked on some won its own size!
0 votes
0 comments
Lebonon - Voter Comments
No Comments
Vote & Comment
7

They have flooded The US economic with crime,Cartells and poverty. Maybe its time that America strikes the problem at its heart?
0 votes
0 comments
Mexico - Voter Comments
No Comments
Vote & Comment
8

EVIL COMMIES even by existing they threaten the very American way of life. They must be dealt with.
0 votes
0 comments
Cuba - Voter Comments
No Comments
Vote & Comment
9

Recently Saudi/American oil trade has dropped by 0.1% this has resulted in the death of 12 US children. If this happens again America may be forced into taking Saudi by force and taking control of the oil fields.
0 votes
0 comments
Saudi Arabia - Voter Comments
No Comments
Vote & Comment
10

The pirates are a threat to all ships if Somalia and the only way to deal with them are bombs!
0 votes
0 comments
Somalia - Voter Comments
No Comments
Vote & Comment
Leave a comment...
(Maximum 900 words)

CommunistDog says2015-04-15T06:45:58.0034700-05:00
Report Post
This poll is biased. Yes, the American government is anticipating on expanding their army but only because of the recent threats from other nations. Especially those with nuclear bomb threats.

biggest_pro_going says2015-04-15T07:13:08.3019084-05:00
Report Post
". Especially those with nuclear bomb threats."- u mean north Korea? I hope u don't mean Iran. North Korea may have threatened America with nukes but it has 5 that don't have the range to hit America! Talking about Nukes we cant really trust America i mean they said IRAQ had them so hmmm... Two nukes have ever been fired in history, and BOTH times it was by America at civilians. I would bet the third Nuke ever to be fired would also be BY AMERICA not north Korea and defiantly NOT IRAN.