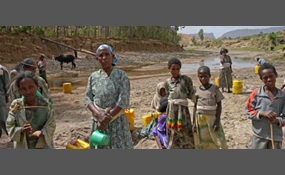 What country is most in need?

Democratic Republic of the Congo

The Democratic Republic of the Congo, also known as DR Congo, DRC, Congo, Congo-Kinshasa, DROC, or RDC, is a country located in Central Africa. It borders the Republic of the Congo, the Central African Republic, and South Sudan to the north, Uganda,...  Rwanda, Burundi and Tanzania to the East, Zambia and Angola to the south and the Atlantic Ocean to the west. It is the second largest country in Africa by area and the eleventh largest in the world. With a population of over 75 million, the Democratic Republic of the Congo is the most populous officially Francophone country, the fourth most populous nation in Africa and the nineteenth most populous country in the world.The Congolese Civil Wars, beginning in 1996, brought about the end of Mobutu Sese Seko's 31 year reign, devastated the country, and ultimately involved nine African nations, multiple groups of UN peacekeepers and twenty armed groups. The wars resulted in the deaths of 5.4 million people since 1998 with more than 90% of those deaths the result of malaria, diarrhea, pneumonia and malnutrition, aggravated by displacement and unsanitary and over-crowded living conditions. Nearly half of the victims were children under five   more
3 votes
1 comment
Democratic Republic of the Congo - Voter Comments

Diqiucun_Cunmin says2015-04-29T06:08:54.4402222-05:00
Report Post
I added DR Congo because I know somewhat more about it, but pretty much any country in Sub-Saharan Africa needs more help than India. Bangalore is doing well in IT, and their Bollywood movies are known worldwide. Waaaay more economically developed than Sub-Saharan Africa. It's not just the economy. Take women's right for another example - they have terrible rapes, but at least the recent vigilantism should deter some. In Nigeria, Boko Haram is kidnapping girls to use as slaves.
Vote & Comment
2

The United States of America, commonly referred to as the United States, America, and sometimes the States, is a federal republic consisting of 50 states and a federal district. The 48 contiguous states and Washington, D.C., are in central North Ame... rica between Canada and Mexico. The state of Alaska is the northwestern part of North America and the state of Hawaii is an archipelago in the mid-Pacific. The country also has five populated and nine unpopulated territories in the Pacific and the Caribbean. At 3.80 million square miles and with around 318 million people, the United States is the world's third- or fourth-largest country by total area and third-largest by population. It is one of the world's most ethnically diverse and multicultural nations, the product of large-scale immigration from many countries. The geography and climate of the United States is also extremely diverse, and it is home to a wide variety of wildlife.Paleo-Indians migrated from Eurasia to what is now the U.S. mainland around 15,000 years ago, with European colonization beginning in the 16th century. The United States emerged from 13 British colonies located along the Atlantic seaboard   more
2 votes
2 comments
United States of America - Voter Comments

w.Wallace says2015-05-17T19:36:24.0652696-05:00
Report Post
When the USA was the strongest, it helped many others, in fact by opening up manufacturing in poor countries was considered by many a 'humanitarian act'. In so doing, almost all jobs are overseas and the middle class has disappeared, an ongoing process to this day. Therefore, a house divided cannot stand. A country in debt, unable to pay taxes to support infrastructures, unable to increase the taxpayer citizen is doomed to be overtaken. The USA is sustained and supported by China, and also is our Supreme Debt as of today -- many trillions we cannot pay back. The enemy we once fought to suppress was proliferated by our 'dollar store' mentality and unending military interventions. You see - no military we ever had was ever able to keep Communism from overtaking this country. Mission accomplished by China, Bin Laden, etc. ....on and on..........

Ezk says2015-06-05T18:35:01.7650460-05:00
Report Post
The US. It is the country that needs the most in terms of job creation, and civil rights revival. Clearly jobs are shipping out in packs, and vanishing under the "genius intellectual management" of financial firms. Civil rights, especially at work are non existent, since they are covered under the thick cloak of at-will. Title VII 1964 is made to be a joke --i invite anyone to find an employer willing to "write a termination letter that specifies the termination reason to be any type of discrimination. If that is not available, there is no chance for succeeding in a trial.
Vote & Comment
3

The most populous nation in Africa, Nigeria, has an average age of 15.8 years and is plagued by Boko Haram and a divide between the Muslim North and Christian South.
1 vote
1 comment
Nigeria - Voter Comments

WNdebater says2015-05-02T20:45:07.2645426-05:00
Report Post
They desperately need population control laws like China has. They also need a well-organized government and military that can crush Boko Haram. Sadly, rampant overpopulation and corruption seem to be the African way. I'm not optimistic.
Vote & Comment
4

Chad, officially the Republic of Chad, is a landlocked country in Central Africa. It is bordered by Libya to the north, Sudan to the east, the Central African Republic to the south, Cameroon and Nigeria to the southwest and Niger to the west. It is ... the fifth largest country in Africa in terms of area.Chad is divided into multiple regions: a desert zone in the north, an arid Sahelian belt in the centre and a more fertile Sudanese savanna zone in the south. Lake Chad, after which the country is named, is the largest wetland in Chad and the second-largest in Africa. N'Djamena, the capital, is the largest city. Chad is home to over 200 different ethnic and linguistic groups. Arabic and French are the official languages. Islam and Christianity are the most widely practiced religions.Beginning in the 7th millennium BC, human populations moved into the Chadian basin in great numbers. By the end of the 1st millennium BC, a series of states and empires rose and fell in Chad's Sahelian strip, each focused on controlling the trans-Saharan trade routes that passed through the region. France conquered the territory by 1920 and incorporated it as part of French Equatorial Africa   more
1 vote
0 comments
Chad - Voter Comments
No Comments
Vote & Comment
5

Ethiopia, officially known as the Federal Democratic Republic of Ethiopia, is a country located in the Horn of Africa. It is bordered by Eritrea to the north and northeast, Djibouti and Somalia to the east, Sudan and South Sudan to the west, and Ken... ya to the south. With about 87.9 million inhabitants, Ethiopia is the most populous landlocked country in the world, as well as the second-most populated nation on the African continent. It occupies a total area of 1,100,000 square kilometres, and its capital and largest city is Addis Ababa.Some of the oldest evidence for modern humans is found in Ethiopia, which is widely considered the region from which Homo sapiens first set out for the Middle East and points beyond. Tracing its roots to the 2nd millennium BCE, Ethiopia was a monarchy for most of its history. During the first centuries of the Common Era the Kingdom of Aksum maintained a unified civilization in the region.Ethiopia derived prestige for its uniquely successful military resistance during the late 19th-century Scramble for Africa, and subsequently many African nations adopted the colors of Ethiopia's flag following their independence   more
0 votes
0 comments
Ethiopia - Voter Comments
No Comments
Vote & Comment
6