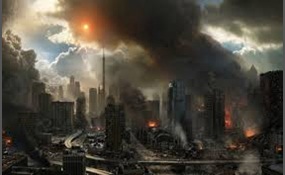 What country is the biggest threat to the world right now?

Again I have my own opinion but I'm curious about everyone else.

The United States of America, commonly referred to as the United States, America, and sometimes the States, is a federal republic consisting of 50 states and a federal district. The 48 contiguous states and Washington, D.C., are in central North Ame... rica between Canada and Mexico. The state of Alaska is the northwestern part of North America and the state of Hawaii is an archipelago in the mid-Pacific. The country also has five populated and nine unpopulated territories in the Pacific and the Caribbean. At 3.80 million square miles and with around 318 million people, the United States is the world's third- or fourth-largest country by total area and third-largest by population. It is one of the world's most ethnically diverse and multicultural nations, the product of large-scale immigration from many countries. The geography and climate of the United States is also extremely diverse, and it is home to a wide variety of wildlife.Paleo-Indians migrated from Eurasia to what is now the U.S. mainland around 15,000 years ago, with European colonization beginning in the 16th century. The United States emerged from 13 British colonies located along the Atlantic seaboard   more
9 votes
1 comment
United States of America - Voter Comments

Russia, also officially known as the Russian Federation, is a country in northern Eurasia. It is a federal semi-presidential republic. From northwest to southeast, Russia shares land borders with Norway, Finland, Estonia, Latvia, Lithuania and Polan... d, Belarus, Ukraine, Georgia, Azerbaijan, Kazakhstan, China, Mongolia, and North Korea. It shares maritime borders with Japan by the Sea of Okhotsk and the US state of Alaska across the Bering Strait. At 17,075,400 square kilometres, Russia is the largest country in the world, covering more than one-eighth of the Earth's inhabited land area. Russia is also the world's ninth most populous nation with 143 million people as of 2012. Extending across the entirety of northern Asia and much of Eastern Europe, Russia spans nine time zones and incorporates a wide range of environments and landforms.The nation's history began with that of the East Slavs, who emerged as a recognizable group in Europe between the 3rd and 8th centuries AD. Founded and ruled by a Varangian warrior elite and their descendants, the medieval state of Rus arose in the 9th century   more
9 votes
2 comments
Russia - Voter Comments

I'm sure I missed some, but only countries please no groups.
5 votes
1 comment
Other - Voter Comments

Iran, also known as Persia, officially the Islamic Republic of Iran, is a country in Western Asia. It is bordered to the northwest by Armenia and Azerbaijan, with Kazakhstan and Russia across the Caspian Sea; to the northeast by Turkmenistan; to the...  east by Afghanistan and Pakistan; to the south by the Persian Gulf and the Gulf of Oman; and to the west by Turkey and Iraq. Comprising a land area of 1,648,195 km², it is the second-largest nation in the Middle East and the 18th-largest in the world; with 78.4 million inhabitants, Iran is the world's 17th most populous nation. It is the only country that has both a Caspian Sea and Indian Ocean coastline. Iran has been of geostrategic importance because of its central location in Eurasia and Western Asia and the Strait of Hormuz.Iran is home to one of the world's oldest civilizations, beginning with the formation of the Proto-Elamite and Elamite kingdom in 3200–2800 BCE. The Iranian Medes unified the country into the first of many empires in 625 BCE, after which it became the dominant cultural and political power in the region   more
2 votes
0 comments
Iran - Voter Comments
No Comments
Vote & Comment
5

China, officially the People's Republic of China, is a sovereign state located in East Asia. It is the world's most populous country, with a population of over 1.35 billion. The PRC is a single-party state governed by the Communist Party, with its s... eat of government in the capital city of Beijing. It exercises jurisdiction over 22 provinces, five autonomous regions, four direct-controlled municipalities, and two mostly self-governing special administrative regions. The PRC also claims the territories governed by the Republic of China, a separate political entity commonly known as Taiwan today, as a part of its territory, which includes the island of Taiwan as Taiwan Province, Kinmen and Matsu as a part of Fujian Province and islands the ROC controls in the South China Sea as a part of Hainan Province, a claim which is controversial due to the complex political status of Taiwan.Covering approximately 9.6 million square kilometers, China is the world's second-largest country by land area, and either the third or fourth-largest by total area, depending on the method of measurement   more
1 vote
0 comments
China - Voter Comments
No Comments
Vote & Comment
6

North Korea, officially the Democratic People's Republic of Korea, is a country in East Asia, in the northern part of the Korean Peninsula. The name Korea is derived from Goryeo, a name used by ancient and medieval kingdoms. The capital and largest ... city is Pyongyang. North Korea shares a land border with China to the north and north-west, along the Amnok and Tumen rivers. A small section of the Tumen River also forms North Korea's short border with Russia to the northeast. The Korean Demilitarized Zone marks the boundary between North Korea and South Korea. The legitimacy of this border is not accepted by either side, as both states claim to be the legitimate government of the entire peninsula.Korea was annexed by the Empire of Japan in 1910. In 1945, when Japan was defeated in World War II, Korea was divided into two occupied zones, with the north occupied by the Soviet Union and the south by the United States. Negotiations on unification failed, and in 1948 two separate governments were formed: the Democratic People's Republic of Korea in the north, and the Republic of Korea in the south. The conflicting claims of sovereignty led to the Korean War in 1950   more
0 votes
0 comments
North Korea - Voter Comments
No Comments
Vote & Comment
7

Israel, officially the State of Israel, is a country in Western Asia, situated at the southeastern shore of the Mediterranean Sea. It shares land borders with Lebanon to the north, Syria in the northeast, Jordan on the east, the Palestinian territor... ies comprising the West Bank and Gaza Strip on the east and southwest, respectively, and Egypt and the Gulf of Aqaba in the Red Sea to the south. It contains geographically diverse features within its relatively small area. Israel's financial center is Tel Aviv, while Jerusalem is the country's most populous city and its designated capital, although Israeli sovereignty over Jerusalem is not recognized internationally.On 29 November 1947, the United Nations General Assembly recommended the adoption and implementation of the Partition Plan for Mandatory Palestine. The end of the British Mandate for Palestine was set for midnight on 14 May 1948. That day, David Ben-Gurion, the Executive Head of the Zionist Organization and president of the Jewish Agency for Palestine, declared "the establishment of a Jewish state in Eretz Israel, to be known as the State of Israel," which would start to function from the termination of the mandate   more
0 votes
0 comments
Israel - Voter Comments
No Comments
Vote & Comment
Leave a comment...
(Maximum 900 words)

briantheliberal says2015-05-20T02:25:14.6367973-05:00
Report Post
The United States is, especially with Republicans in control who want to send us back to the Middle East to bomb people.
Privacy Policy | Terms of Use
Sitemap | View Desktop Version
©2020 Debate.org. All rights reserved.