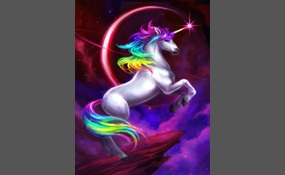 What do Unicorns eat?

Sparkles can be good for unicorns, if they sh*t it out, why don't they eat it, and it goes back in their systems, to be sh*t out again, it's a never-ending cycle.
3 votes
1 comment
Sparkles - Voter Comments

Reason for their eminent extinction, Unicorns eat other Unicorns dew to the sufficient boost in energy only Unicorns can provide, because Unicorns are able to live for centuries.
1 vote
0 comments
Other Unicorns - Voter Comments
No Comments
Vote & Comment
11

The carrot is a root vegetable, usually orange in colour, though purple, red, white, and yellow varieties exist. It has a crisp texture when fresh. The most commonly eaten part of a carrot is a taproot, although the greens are sometimes eaten as wel... l. It is a domesticated form of the wild carrot Daucus carota, native to Europe and southwestern Asia. The domestic carrot has been selectively bred for its greatly enlarged and more palatable, less woody-textured edible taproot. The Food and Agriculture Organization of the United Nations reports that world production of carrots and turnips for calendar year 2011 was almost 35.658 million tonnes. Almost half were grown in China. Carrots are widely used in many cuisines, especially in the preparation of salads, and carrot salads are a tradition in many regional cuisines   more
0 votes
0 comments
Carrot - Voter Comments
No Comments
Vote & Comment
17

LGBT is an initialism that stands for lesbian, gay, bisexual, and transgender. In use since the 1990s, the term is an adaptation of the initialism LGB, which itself started replacing the term gay when in reference to the LGBT community beginning in ... the mid-to-late 1980s, as many felt the term gay community did not accurately represent all those to whom it referred. The initialism has become mainstream as a self-designation and has been adopted by the majority of sexuality and gender identity-based community centers and media in the United States and some other English-speaking countries. It is also used in some other countries in whose languages the initialism is meaningful, such as France.The initialism LGBT is intended to emphasize a diversity of sexuality and gender identity-based cultures and is sometimes used to refer to anyone who is non-heterosexual or non-cisgender instead of exclusively to people who are lesbian, gay, bisexual, or transgender. To recognize this inclusion, a popular variant adds the letter Q for those who identify as queer and/or are questioning their sexual identity as LGBTQ, recorded since 1996.On the one hand, some intersex people who want to be included in LGBT groups suggest an extended initialism LGBTI. This initialism "LGBTI" is used in all parts of "The Activist's Guide" of the Yogyakarta Principles in Action. Furthermore, the initialism LGBTIH has seen use in India to encompass the hijra third gender identity and the related subculture. More recently the catch-all term "Gender and Sexual Diversity" GSD has been proposed   more
0 votes
0 comments
Lesbians - Voter Comments
No Comments
Vote & Comment
Leave a comment...
(Maximum 900 words)