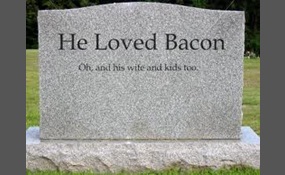 What do you believe death holds?

Feel free to add your own opinions.

Death brings us to an empty void... Nothing happens after our lives meet their ends.
17 votes
5 comments
Nothing - Voter Comments

Kreakin says2014-06-18T10:11:26.4188365-05:00
Report Post
It would seem that death is the ceasation of highly complex chemical reactions that combine to what we call life. Where does the energy stored in that system goe, well electrical back to groung, heat into near by substances and chemical back to the earth. That energy is not what I would think of as a traditional soul so I think death means oblivion. Slightly anxiety provoking but there is always religion to fall back on should I choose.
Vote & Comment
2
VOTING CLOSED

Heaven, the Heavens or Seven Heavens, is a common religious, cosmological or transcendent place from which heavenly beings originate, are enthroned or inhabit. It is commonly believed that heavenly beings can descend to earth or incarnate and that e... arthly beings can ascend to Heaven in the afterlife or, in exceptional cases, enter Heaven alive.Heaven is often described as a "higher place", the holiest place, a Paradise, in contrast to Hell or the Underworld or the "low places", and universally or conditionally accessible by earthly beings according to various standards of divinity, goodness, piety, faith, or other virtues or right beliefs or simply the Will of God. Some believe in the possibility of a Heaven on Earth in a World to Come.Another belief is in an Axis mundi or World tree which connects the heavens, the world, and the underworld. In Indian religions, Heaven is considered as Svarga loka, and soul is again subjected to rebirth in different living forms according to its karma. This cycle can be broken after a soul achieves Moksha or Nirvana. Any place of existence, either of humans, souls or deities, outside the tangible world is called otherworld   more
7 votes
3 comments
Heaven - Voter Comments

Purgatory, according to Catholic Church doctrine, is an intermediary state after physical death in which those destined for heaven "undergo purification, so as to achieve the holiness necessary to enter the joy of heaven". Only those who die in the ... state of grace but have not in life reached a sufficient level of holiness can be in Purgatory, and therefore no one in Purgatory will remain forever in that state or go to hell. This theological notion has ancient roots and is well-attested in early Christian literature, but the poetic conception of Purgatory as a geographically existing place is largely the creation of medieval Christian piety and imagination.The notion of Purgatory is associated particularly with the Latin Rite of the Catholic Church; Anglicans of the Anglo-Catholic tradition generally also hold to the belief, along with many Lutherans of High Church Lutheranism. Eastern Orthodox Churches believe in the possibility of a change of situation for the souls of the dead through the prayers of the living and the offering of the Divine Liturgy, and many Orthodox, especially among ascetics, hope and pray for a general apocatastasis   more
2 votes
0 comments
Purgatory - Voter Comments
No Comments
Vote & Comment
4
VOTING CLOSED

yetifivepecks says2014-06-19T21:55:25.5614909-05:00
Report Post
I actually have no idea. I picked this purely to be different. Perhaps paradise awaits me, or perhaps an endless void. Maybe another dimension? Perhaps we will become ghosts. The truth is that we do not, and cannot know until we die. Unless, of course, it is just nothingness that awaits us. In any case, I am not too worried about it.
Vote & Comment
6
VOTING CLOSED

In Norse religion, Asgard is one of the Nine Worlds and home to the Æsir tribe of gods. It is surrounded by an incomplete wall attributed to a Hrimthurs riding the stallion Svaðilfari, according to Gylfaginning. Odin and his wife, Frigg, are the rul... ers of Asgard.One of Asgard's well known locations is Valhalla, in which Odin rules   more
1 vote
1 comment
Asgard - Voter Comments

Gustav_Adolf_II says2014-06-18T03:15:49.6258803-05:00
Report Post
I believe I will go to Asgard when I die (if I die in battle or do heroic deeds that is), but the evidence shows I will most likely just be charred by the the burning ship burial and then decomposed by single-celled organisms.
Vote & Comment
8
VOTING CLOSED

In many mythological, folklore and religious traditions, hell is a place of eternal torment in an afterlife, often after resurrection. It is viewed by most Abrahamic traditions as a place of punishment. Religions with a linear divine history often d... epict hells as eternal destinations. Religions with a cyclic history often depict a hell as an intermediary period between incarnations. Typically these traditions locate hell in another dimension or under the Earth's surface and often include entrances to Hell from the land of the living. Other afterlife destinations include Heaven, Purgatory, Paradise, and Limbo.Other traditions, which do not conceive of the afterlife as a place of punishment or reward, merely describe hell as an abode of the dead, a neutral place located under the surface of Earth. Modern understandings of hells often depict them abstractly, as a state of loss rather than as fiery torture literally underground, but this view of the concept of a hell can, in fact, be traced back into the ancient and medieval periods as well. Hell is sometimes portrayed as populated with demons who torment those dwelling there   more
0 votes
0 comments
Hell - Voter Comments
No Comments
Vote & Comment
Leave a comment...
(Maximum 900 words)