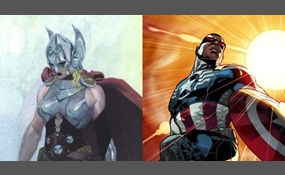 What do you think about Marvel's decision to change Captian America and Thor?

Marvel has announced Captian America will Change from actor Steve Rogers to Sam Wilson. Thor who is played by male Actor Chris Hemsworth will be changing to UNKOWN female Actress.

Could we just create new Characters Equally cool without Change?

7 votes
2 comments
I Do not like ths Change! - Voter Comments

Jay-D says2014-07-21T10:50:36.1024293-05:00
Report Post
Seriously? Thor, female? Thor is a norse GOD, not goddess. If they make such a change, they're going against the canonical principles, and hence Marvel's Thor will no longer have any connection whatsoever to the real Thor. If any norse religious organizations still existed, they could probably sue Marvel over this :P anyways, weird happenings in MCU like this are why I love DC so much!

Why Change Gender and Ethnicity of Characters created in the 1940's?

2 votes
1 comment
Why Change Gender and Ethnicity of Characters created in the 1940's? - Voter Comments

thehumanistpreacher says2014-07-26T17:08:53.5592898-05:00
Report Post
I am in favour of creating new characters but this almost seems pointless and just for hype. If this reason was made with more creativity and not to make money off a more female fan base then I could see myself at least understanding the reasons for this decision being made but it's for the worst type of reasons being media hype, more money off a woman's fanbase and just being to uncreative creating an original character with a whole new world model and different back story but instead they went for controversy over long held fanbase loyalty.
Vote & Comment
4

Who Cares i do not watch or read Comic novelties.

1 vote
0 comments
Who Cares i do not watch or read Comic novelties. - Voter Comments
No Comments
Vote & Comment
6

This is a 'Progressive' attempt at Erasing White superheros.

HammerPairUSMC says2014-07-21T11:02:02.0199576-05:00
Report Post
I know it is just a Story Arc for Marvel but i think this is designed to generate controversy in the Media for hype advertising. When Hindsight is 20/20 it really does not matter who plays the role but I do not like the Changes. I would love seeing new characters created or a spin off from Falcon instead. After all these characters have been around roughly since the 1940's without change, so why now? WHYYYYYYYYYYYYY Marvel why? LOL

shaddamcorrinoIV says2014-07-21T19:06:23.9817300-05:00
Report Post
I mean I'm for gender and racial equality but,1) Captain America is too iconic of a character to change. 2) Having two superheros changed for gender and racial equality isn't going to do diddly-squat to the socioeconomic realities facing both groups, this is the least helpful way to promote equality. 3) If this is a P.R. By Marvel to get more readers, why don't they just pull a hitchcock and kill off the main characters resulting a second generation of supes? That would be far more interesting.