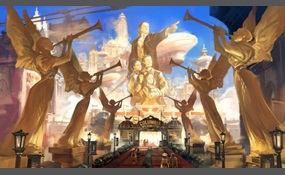 What do you think is the best Utopian society/variety?

If only an inter-religious utopia was possible on this site...

Scientific and technological utopias are set in the future, when it is believed that advanced science and technology will allow utopian living standards; for example, the absence of death and suffering; changes in human nature and the human conditio... n. Technology has affected the way humans have lived to such an extent that normal functions, like sleep, eating or even reproduction, have been replaced by artificial means. Other examples include a society where humans have struck a balance with technology and it is merely used to enhance the human living condition (e.G. Star Trek). In place of the static perfection of a utopia, libertarian transhumanists envision an "extropia", an open, evolving society allowing individuals and voluntary groupings to form the institutions and social forms they prefer   more
6 votes
2 comments
Scientific/technological utopia - Voter Comments

Ecological utopian society describes new ways in which society should relate to nature. They react to a perceived widening gap between the modern Western way of living that, allegedly, destroys nature and a more traditional way of living before indu... strialization, that is regarded by the ecologists to be more in harmony with nature. According to the Dutch philosopher Marius de Geus, ecological utopias could be sources of inspiration for green political movements   more
4 votes
1 comment
Ecological utopia - Voter Comments

Particularly in the early 19th century, several utopian ideas arose, often in response to their belief that social disruption was created and caused by the development of commercialism and capitalism. These are often grouped in a greater "utopian so... cialist" movement, due to their shared characteristics: an egalitarian distribution of goods, frequently with the total abolition of money, and citizens only doing work which they enjoy and which is for the common good, leaving them with ample time for the cultivation of the arts and sciences. One classic example of such a utopia was Edward Bellamy's Looking Backward. Another socialist utopia is William Morris' News from Nowhere, written partially in response to the top-down (bureaucratic) nature of Bellamy's utopia, which Morris criticized. However, as the socialist movement developed it moved away from utopianism; Marx in particular became a harsh critic of earlier socialism he described as utopian. (For more information see the History of Socialism article.) In a utopian society, the economy, concurrent with the ongoing theme, is perfect; there is no inflation, and perfect social and financial equality. However, in 1905 H.G. Wells published A Modern Utopia, which was widely read and admired and provoked much discussion. Also consider Eric Frank Russell's book The Great Explosion (1963) whose last section details an economic and social utopia. This forms the first mention of the idea of Local Exchange Trading Systems (LETS)   more
2 votes
0 comments
Economic utopia - Voter Comments
No Comments
Vote & Comment
4

A global utopia of world peace is often seen as one of the possible end results of world history. Within the localized political structures or spheres it presents, "polyculturalism" is the model-based adaptation of possible interactions with differe... nt cultures and identities in accordance with the principles of participatory society   more
2 votes
0 comments
Political utopia - Voter Comments
No Comments
Vote & Comment
5

I think a dystopia is preferable to a utopia.

A dystopia (from the Greek δυσ- and τόπος, alternatively, cacotopia, kakotopia, or anti-utopia) is an imaginary community or society that is undesirable or frightening. It is literally translated as "not-good place", an antonym of utopia. Such socie... ties appear in many artistic works, particularly in stories set in a future. Dystopias are often characterized by dehumanization, totalitarian governments, environmental disaster, or other characteristics associated with a cataclysmic decline in society. Dystopian societies appear in many subgenres of fiction and are often used to draw attention to real-world issues regarding society, environment, politics, economics, religion, psychology, ethics, science, and/or technology, which if unaddressed could potentially lead to such a dystopia-like condition   more
2 votes
2 comments
I think a dystopia is preferable to a utopia. - Voter Comments

triangle.128k says2015-06-03T16:11:37.9079319-05:00
Report Post
Utopia just can't happen without violating the true nature of humans. If we somehow achieve a Utopian society, it would be so freaking boring for various reasons. A perfect society is also simply un-achievable, perfection is a theoretical term and nothing as complex as an economy or society can ever be perfect.

Forthelulz says2015-06-03T17:05:49.2132558-05:00
Report Post
What triangle said, coupled with the fact that one person's standards for a utopia would be very different from another's. Would me and mine have to lay down and die so someone can live in their perfect world?
Vote & Comment
6

Utopian single-gender worlds or single-sex societies have long been one of the primary ways to explore implications of gender and gender-differences. In speculative fiction, female-only worlds have been imagined to come about by the action of diseas... e that wipes out men, along with the development of technological or mystical method that allow female parthenogenic reproduction. Charlotte Perkins Gilman's 1915 novel approaches this type of separate society. Many feminist utopias pondering separatism were written in the 1970s, as a response to the Lesbian separatist movement;examples include Joanna Russ's The Female Man and Suzy McKee Charnas's Walk to the End of the World and Motherlines. Utopias imagined by male authors have often included equality between sexes, rather than separation, although as noted Bellamy's strategy includes a certain amount of "separate but equal". The use of female-only worlds allows the exploration of female independence and freedom from patriarchy. The societies may not necessarily be lesbian, or sexual at all — a famous early sexless example being Herland (1915) by Charlotte Perkins Gilman. Charlene Ball writes in Women's Studies Encyclopedia that use of speculative fiction to explore gender roles in future societies has been more common in the United States compared to Europe and elsewhere, although such efforts as Gert Brantenberg's Egalia's Daughters and Christa Wolf's portrayal of the land of Colchis in her Medea: Voices are certainly as influential and famous as any of the American feminist utopias   more
0 votes
0 comments
Feminist utopia - Voter Comments
No Comments
Vote & Comment
7

The inter-religious utopia is similar to multiculturalism which can be taken as a working example of where real world cultures have successfully worked together to create a wider society based on shared values. The ideology of God and religion used ... in inter-religious utopia is commonly stated by many people as their view of God. In more extended theories it goes up to the level of different religious leaders setting aside their differences and accepting harmony, peace and understanding to unite all religions within one another, thereby forming a utopian religion or a religion of humans with God any type of force that reigned before the birth of the universe. Religion and God could be used as a self-motivating factor for people to believe in and to raise themselves out of difficult situations   more
0 votes
0 comments
Inter-religious utopia - Voter Comments
No Comments
Vote & Comment
8

Intra-religious utopias are based on religious ideals, and are to date those most commonly found in human societies. Their members are usually required to follow and believe in the particular religious tradition that established the utopia. Some per... mit non-believers or non-adherents to take up residence within them; others (such as the community at Qumran) do not. The Jewish, Christian, and Islamic ideas of the Garden of Eden and of Heaven/Paradise may be interpreted as forms of utopianism, especially in their folk-religious forms. Such religious utopias are often described as "gardens of delight", implying an existence free from worry in a state of bliss or enlightenment. They postulate freedom from sin, pain, poverty, and death; and often assume communion with beings such as angels or the houri. In a similar sense, the Hindu concept of moksha and the Buddhist concept of nirvana may be thought of as a kind of utopia. However, in Hinduism or Buddhism, utopia is not a place but a state of mind. A belief that if one is able to practice meditation without continuous stream of thoughts, one is able to reach enlightenment. This enlightenment promises exit from the cycle of life and death, relating back to the concept of utopia   more
0 votes
0 comments
Intra-religious utopia - Voter Comments
No Comments
Vote & Comment
Leave a comment...
(Maximum 900 words)

PetersSmith says2015-06-03T19:09:07.9651325-05:00
Report Post
Forthelulz: The poll has to be overly one-sided in order to be considered for removal. This poll includes multiple options in regards to the topic, but obviously does not include them all. Because of this, all polls are biased in some way, but a poll like this is not qualified for being overly biased. Like many of my polls have large amounts of answers, but you can't call out the poll being biased for not including something you wanted to be included.

Diqiucun_Cunmin says2015-06-03T19:39:53.2490223-05:00
Report Post
My Utopia is obviously the Datong (Grand Union) in Book of Rites 9.1: 'When the Grand course was pursued, a public and common spirit ruled all under the sky; they chose men of talents, virtue, and ability; their words were sincere, and what they cultivated was harmony. Thus men did not love their parents only, nor treat as children only their own sons. A competent provision was secured for the aged till their death, employment for the able-bodied, and the means of growing up to the young. They showed kindness and compassion to widows, orphans, childless men, and those who were disabled by disease, so that they were all sufficiently maintained. Males had their proper work, and females had their homes. (They accumulated) articles (of value), disliking that they should be thrown away upon the ground, but not wishing to keep them for their own gratification. (They laboured) with their strength, disliking that it should not be exerted, but not exerting it (only) with a view to their own advantage. In this way (selfish) schemings were repressed and found no development. Robbers, filchers, and rebellious traitors did not show themselves, and hence the outer doors remained open, and were not shut. This was (the period of) what we call the Grand Union.' (Book of Rites 9.1) I suppose you could call that 'moral utopia' or 'social utopia' or something.