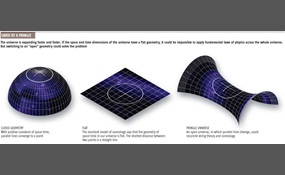 What do you think is the shape of the universe?

A positively curved universe is described by spherical geometry, and can be thought of as a three-dimensional hypersphere, or some other spherical 3-manifold (such as the Poincaré dodecahedral space), all of which are quotients of the 3-sphere. Poi... ncaré dodecahedral space, a positively curved space, colloquially described as "soccerball-shaped", as it is the quotient of the 3-sphere by the binary icosahedral group, which is very close to icosahedral symmetry, the symmetry of a soccer ball. This was proposed by Jean-Pierre Luminet and colleagues in 2003[5][13] and an optimal orientation on the sky for the model was estimated in 2008   more
17 votes
4 comments
Universe with positive curvature (soccerball-shaped) - Voter Comments

A hyperbolic universe, one of a negative spatial curvature, is described by hyperbolic geometry, and can be thought of locally as a three-dimensional analog of an infinitely extended saddle shape. There are a great variety of hyperbolic 3-manifolds,...  and their classification is not completely understood. For hyperbolic local geometry, many of the possible three-dimensional spaces are informally called horn topologies, so called because of the shape of the pseudosphere, a canonical model of hyperbolic geometry. An example is the Picard horn, a negatively curved space, colloquially described as "funnel-shaped"   more
1 vote
0 comments
Universe with negative curvature (funnel/saddle-shaped) - Voter Comments
No Comments
Vote & Comment
3

In a universe with zero curvature, the local geometry is flat. The most obvious global structure is that of Euclidean space, which is infinite in extent. Flat universes that are finite in extent include the torus and Klein bottle. Moreover, in three...  dimensions, there are 10 finite closed flat 3-manifolds, of which 6 are orientable and 4 are non-orientable. The most familiar is the aforementioned 3-Torus universe. In the absence of dark energy, a flat universe expands forever but at a continually decelerating rate, with expansion asymptotically approaching zero. With dark energy, the expansion rate of the Universe initially slows down, due to the effect of gravity, but eventually increases. The ultimate fate of the universe is the same as that of an open universe. A flat universe can have zero total energy   more
1 vote
1 comment
Universe with zero curvature (flat) - Voter Comments

PetersSmith says2015-04-20T10:14:45.5524677-05:00
Report Post
TheHappyReaper: If the Universe was a different shape, then it wouldn't have expanded in all directions. Those other examples are condoned by scientists, so they must have reason behind them.