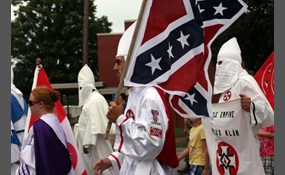 What do you think is the worst type of "hate group"?

I do not condone the actions of the individuals used for the pictures nor the hate groups themselves.

Neo-Nazism consists of post-World War II social or political movements seeking to revive the far-right-wing tenets of Nazism. The term neo-Nazism can also refer to the ideology of these movements.Neo-Nazism borrows elements from Nazi doctrine, inclu... ding militant nationalism, racism, xenophobia, homophobia, antisemitism, and initiating the Fourth Reich. Holocaust denial is a common feature, as is incorporation of Nazi symbols and admiration of Adolf Hitler.Neo-Nazi activity is a global phenomenon, with organized representation in many countries, as well as international networks. In some European and Latin American countries, laws have been enacted that prohibit the expression of pro-Nazi, racist, anti-Semitic or homophobic views. Many Nazi-related symbols are banned in European countries in an effort to curtail neo-Nazism   more
6 votes
3 comments
Neo-Nazi - Voter Comments

UtherPenguin says2016-04-08T22:06:36.2712900Z
Report Post
Neo Nazi's tend to have the same traits as most the other groups (Racism,anti Islam, anti semitism, et cetera). So while Holocaust deniers might have leanings of anti semites and the KKK might have leanings to racism, Neo Nazis have both in extremities.
Vote & Comment
2

Holocaust denial is the act of denying the genocide of Jews in the Holocaust during World War II. Holocaust denial includes any of the following claims: that the German Nazi government's Final Solution policy aimed only at deporting Jews from the Re... ich, and included no policy to exterminate Jews; that Nazi authorities did not use extermination camps and gas chambers to mass murder Jews; and that the actual number of Jews killed was significantly lower than the historically accepted figure of 5 to 6 million.Holocaust deniers generally do not accept the term denial as an appropriate description of their activities, and use the term revisionism instead. Scholars use the term "denial" to differentiate Holocaust deniers from legitimate historical revisionists, who use established historical methodologies. The methodologies of Holocaust deniers are criticized as based on a predetermined conclusion that ignores extensive historical evidence to the contrary.Most Holocaust denial claims imply, or openly state, that the Holocaust is a hoax arising out of a deliberate Jewish conspiracy to advance the interest of Jews at the expense of other peoples   more
4 votes
0 comments
Holocaust denial - Voter Comments
No Comments
Vote & Comment
3

The Ku Klux Klan, or just the Klan, is the name of three distinct movements in the United States. The first played a violent role against African Americans in the South during the Reconstruction Era of the 1860s. The second was a very large controve... rsial nationwide organization in the 1920s. The current manifestation consists of numerous small unconnected groups that use the KKK name. They have all emphasized secrecy and distinctive costumes, and all have called for purification of American society, and all are considered right-wing.The current manifestation is classified as a hate group by the Anti-Defamation League and the Southern Poverty Law Center. It is estimated to have between 5,000 and 8,000 members as of 2012.The first Ku Klux Klan flourished in the Southern United States in the late 1860s, then died out by the early 1870s. Members made their own white costumes: robes, masks, and conical hats, designed to be outlandish and terrifying, and to hide their identities. The second KKK flourished nationwide in the early and mid-1920s, and adopted a standard white costume and code words as the first Klan, while adding cross burnings and mass parades   more
3 votes
0 comments
Ku Klux Klan - Voter Comments
No Comments
Vote & Comment
4

A hate group is an organized group or movement that advocates and practices hatred, hostility, or violence towards members of a race, ethnicity, religion, gender, gender identity, sexual orientation or any other designated sector of society. Accordi... ng to the United States Federal Bureau of Investigation, a hate group's "primary purpose is to promote animosity, hostility, and malice against persons belonging to a race, religion, disability, sexual orientation, or ethnicity/national origin which differs from that of the members of the organization." The Southern Poverty Law Center's definition of a "hate group" includes those having beliefs or practices that attack or malign an entire class of people, typically for their immutable characteristics.In the US, two organizations that monitor intolerance and hate groups are the Anti-Defamation League and the SPLC. The ADL and the SPLC maintain a list of what they deem to be hate groups, supremacist groups and anti-Semitic, anti-government or extremist groups that have committed hate crimes   more
3 votes
2 comments
Hate groups aren't "bad". - Voter Comments

Renegader says2015-07-15T00:00:45.3385737-05:00
Report Post
mainly because all the others don't really exist on the same scale is this anymore. The kkk is basically gone and all the others are pretty minuscule or simply questionable.
Vote & Comment
6

Islamophobia is a term for prejudice against, hatred towards, or fear of the religion of Islam, Muslims, or of ethnic groups perceived to be Muslim. While the term is widely recognized and used, both the term and the underlying concept have been cri... ticized.Some scholars have defined it as a type of racism, the causes and characteristics of Islamophobia are still debated. Some commentators have posited an increase in Islamophobia resulting from the September 11 attacks while others have associated it with the increased presence of Muslims in Western nations   more
2 votes
1 comment
Anti-Muslim - Voter Comments

Christian Identity refers to a wide variety of loosely affiliated believers and churches with a white supremacist theology. Most promote a racist interpretation of Christianity.According to Chester L. Quarles, professor of criminal justice at the Un... iversity of Mississippi, some of the Christian Identity movement's followers believe that non-Caucasian peoples have no souls, and can therefore never earn God's favor or be saved. Believers in the theology affirm that Jesus Christ paid only for the sins of the House of Israel and the House of Judah and that salvation must be received through both redemption and race.In many variations of Christian Identity thought, a key commonality is British Israelism, which teaches that many white Europeans are the literal descendants of the Israelites through the ten tribes which were taken away into captivity by the armies of Assyria   more
0 votes
0 comments
Christian Identity - Voter Comments
No Comments
Vote & Comment
9

Xenophobia is the unreasoned fear of that which is perceived to be foreign or strange. Xenophobia can manifest itself in many ways involving the relations and perceptions of an ingroup towards an outgroup, including a fear of losing identity, suspic... ion of its activities, aggression, and desire to eliminate its presence to secure a presumed purity. Xenophobia can also be exhibited in the form of an "uncritical exaltation of another culture" in which a culture is ascribed "an unreal, stereotyped and exotic quality". Vienna Declaration and Programme of Action urges all governments to take immediate measures and to develop strong policies to prevent and combat all forms and manifestations of racism, xenophobia or related intolerance, where necessary by enactment of appropriate legislation including penal measure   more
0 votes
0 comments
Anti-immigrant - Voter Comments
No Comments
Vote & Comment
10

White power skinheads are a white supremacist and antisemitic offshoot of the skinhead subculture. Many of them are affiliated with white nationalist organizations.The original skinhead subculture started in the late 1960s, and had heavy British mod...  and Jamaican rude boy influences — including an appreciation for ska, early reggae and soul music. The identity of skinheads in the 1960s was neither based on white power nor neo-fascism, but some skinheads had engaged in "gay-bashing", "hippy-bashing" or "Paki bashing".The original skinhead scene had mostly died out by 1972. A late 1970s revival came partly as a backlash against the commercialization of punk rock. This revival coincided with the development of the 2 Tone and Oi! Music genres. The skinhead revival in Britain included a sizable white nationalist faction, involving organizations such as the National Front, British Movement, Rock Against Communism and later Blood and Honour. Because of this, the mainstream media began to label the whole skinhead identity as neo-Nazi.The racist subculture eventually spread to North America, Europe and other areas of the world   more
0 votes
0 comments
Racist skinheads - Voter Comments
No Comments
Vote & Comment
11

According to the Southern Poverty Law Center, radical traditionalist Catholics who "may make up the largest single group of serious anti-Semites in America, subscribe to an ideology that is rejected by the Vatican and some 70 million mainstream Amer... ican Catholics and many of their leaders have been condemned and even excommunicated by the official church. Adherents of radical traditional Catholicism "routinely pillory Jews as 'the perpetual enemy of Christ'", reject the ecumenical efforts of the Vatican, and sometimes argue that all recent Popes are illegitimate. Adherents are also "incensed by the liberalizing reforms" of the Second Vatican Council (1962–65), which condemned hatred for Jewish people and "rejected the accusation that Jews are collectively responsible for deicide in the form of the crucifixion of Christ.   more
0 votes
0 comments
Radical traditional Catholicism - Voter Comments
No Comments
Vote & Comment
12

tommytom says2015-07-14T03:05:20.3996505-05:00
Report Post
First to vote. I couldn't really make a simple decision on which of these were the "worst", which is kind of general, they are all pretty horrible. I voted for Holocaust denial simply because, though I am aware it's pretty small and probably not the "worst", it is in bad taste to deny history, which is something we should learn from so that we do not repeat mistakes again.

Lager says2015-11-18T11:02:32.7254420Z
Report Post
The worst hate group are Zionists. I'm guessing this poll was create by some jew,since they conveniently left out Zionism as part of the options.