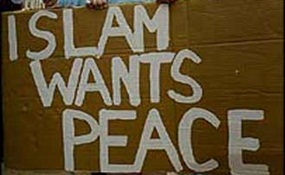 What do you think of Muslims?

I am Muslim. I'm white so people usually assume I'm Christian so I don't have to deal with a lot of the discrimination Muslims have had to deal with since 9/11. I also have many muslim friends. I don't see why people judge a whole group of 1.5 billion people based on the actions of some. Should we judge all Christians for the Oklahoma City bombing Cleveland kidnappings, Andrea Yates or any of the other crimes Christians have done? My dad's Christian and so is most of my dads family. I'm not judging I'm ju

I judge people based on their personality not religion

I am a Muslim

I'm not muslim but I don't hate them

I hate all of them.

1 vote
0 comments
I hate all of them. - Voter Comments
No Comments
Vote & Comment
6

They're fine as long as they're not to religious

I have suspicions but they're fine when I get to know them.

0 votes
0 comments
I have suspicions but they're fine when I get to know them. - Voter Comments
No Comments
Vote & Comment
8

I don't like them but I don't hate them

I don't have an opinion

CanuckDebater says2014-05-12T16:19:03.2000180-05:00
Report Post
It really doesn't matter if you are a Muslim or not. It's a shame that in today's society we still have to judge people based on their religious beliefs. Muslims are humans, just like how Catholics are human, just like how Islamic people are human, etc. If you're Muslim and nice to me, then in return I'll be nice to you. If you're Muslim but rude to me, then I'll return the favor and be rude to you too. So to answer the question in short form, I think Muslims are good people with the occasional outlier of bad people.

MomoDzjamal says2014-05-14T09:09:09.2250707-05:00
Report Post
I am a Muslim myself and i hate all the extremists in my religion that give the whole term 'muslim' a bad name. It's because of a small group of people that have decided to perform terrorist attacks all over the world that millions of people across the globe have developed a hatred towards us.

ChadIrvin says2014-05-17T17:41:59.1259846-05:00
Report Post
The OKC bombing was not done by a Christian. A true Christian does not commit an attrocious act or acts of murder. Just as the KKK are not truly Christians. Just because they claim to be does not mean they are.

Dilara says2014-05-18T10:14:31.6261712-05:00
Report Post
Chadirvin. True. Even though the kkk does things against their religion they still believe that Christ is the son of god which makes them Christians. Maybe they're not true good Christians but they still are Christians. The Taliban is made up of bad people who aren't true Muslims and do things against the teachings of Islam but if they believe the basics of the religion they are still Muslims.
Privacy Policy | Terms of Use
Sitemap | View Desktop Version
©2021 Debate.org. All rights reserved.