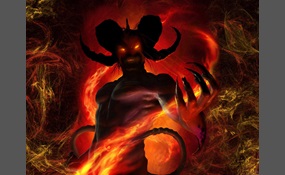 What do you think of the Devil?

I've seen a lot of depictions of what the Devil might be. So, I wanted to ask what you guys think of him/her.

This is a rare one as it is also the one nobody wants to accept but I decided to add it anyways. Some people believe that the Devil is not real. Simple as that. They do believe God is real but they believe that the only evil there is would be humank... ind and that it was not the work of the Devil. The evils committed are their own fault for being evil at the moment   more
15 votes
2 comments
The Devil isn't real. - Voter Comments

Donderpants says2015-07-29T18:13:53.2098809Z
Report Post
I imagine this is the one atheists will pick (although the description is still biased, that's missing atheists altogether) but as a Christian, this is also my choice. The devil is metaphorical. NZ christian beliefs are actually that most of the bible is metaphorical. They encourage you to believe that in R.E. classes in both the schools I've gone to.
Vote & Comment
2

The Devil is the greatest form of evil.

This would be the original idea or at least the most well known. The Devil being a fallen angel and was sentenced to Hell where he tortures sinners as a way to piss God.
8 votes
1 comment
The Devil is the greatest form of evil. - Voter Comments

The Devil is a warden and Hell is the world's greatest prison.

Like said, the Devil might be more like a warden to a prison than the ultimate evil. Hell would be the prison where the sinners are the prisoners and the demons are the guards.
1 vote
0 comments
The Devil is a warden and Hell is the world's greatest prison. - Voter Comments
No Comments
Vote & Comment
4

The Devil is God in disguise.

Now, this isn't a very popular one but I've heard that some people believe that the Devil might actually be God in disguise as a way to teach mankind of the evils found in existence. He created the person of the Devil so that people would despise ev... il and stay away from his teachings   more
1 vote
0 comments
The Devil is God in disguise. - Voter Comments
No Comments
Vote & Comment
5

The Devil keeps the evil at bay.

Imagine the world being truly evil and that the Devil's job is to keep the evil from pouring into the world, a bit like Pandora's box. So basically, he's still an angel but works differently.
1 vote
0 comments
The Devil keeps the evil at bay. - Voter Comments
No Comments
Vote & Comment
6

The Devil is a business man.

This was posted as a joke but let's see how much actually think so. The idea was that the Devil is a business man. Basically, he makes a profit by making people miserable, dark and evil. He earns from suffering and despair. What does he get? That gu... ess it as good as mine, which is I don't know! Whatever it is, it could be valuable in the world of god(s) and pseudo-gods. Kinda like money is in our own world   more
1 vote
0 comments
The Devil is a business man. - Voter Comments
No Comments
Vote & Comment
Leave a comment...
(Maximum 900 words)

o0jeannie0o says2015-07-29T17:04:55.8096832Z
Report Post
Of course i dont believe in anything inherently evil but i always wonder why Christians think he is so bad. I get that he didnt like god making man less powerful then him and then not obeying him, but in reality most kids would do the same to their new brother. The devil killed like 10 people, with gods permission, wile the "all good" god apparently killed millions, if not billions. Really does not seem like the devil is the inherently evil one.

Trent_Jordan says2015-07-31T14:34:18.2540884Z
Report Post
I do not believe in God nor the Devil so I dont know which to vote for. But personally(Hear me out first) I dont think the devil is really that bad. He was punished for disobeying and he was punished for questioning god. Because he opposed God, he was labelled evil? Lets say I did believe that what occurs in the bible is read, then surely this makes God more of crazed Tyrant then a loving nurturing man. Who is really in the wrong?
Privacy Policy | Terms of Use
Sitemap | View Desktop Version
©2020 Debate.org. All rights reserved.