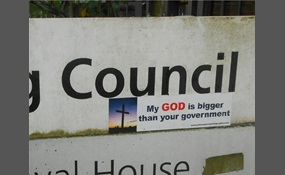 What do you think of this picture

"My God is bigger than your government"

True. We are our own gods.

Only we can control our lives. We are our own gods so technically, the population is bigger than the government. More intelligent? No, more like completely oblivious but bigger, Yes.
1 vote
0 comments
True. We are our own gods. - Voter Comments
No Comments
Vote & Comment
4

Osiris, is an Egyptian god, usually identified as the god of the afterlife, the underworld and the dead. He was classically depicted as a green-skinned man with a pharaoh's beard, partially mummy-wrapped at the legs, wearing a distinctive crown with...  two large ostrich feathers at either side, and holding a symbolic crook and flail.Osiris was at times considered the oldest son of the Earth god Geb, and the sky goddess Nut, as well as being brother and husband of Isis, with Horus being considered his posthumously begotten son. He was also associated with the epithet Khenti-Amentiu, which means "Foremost of the Westerners" — a reference to his kingship in the land of the dead. As ruler of the dead, Osiris was also sometimes called "king of the living", since the Ancient Egyptians considered the blessed dead "the living ones". Osiris was considered the brother of Isis, Set, Nephthys, Horus the Elder and father of Horus the younger. Osiris is first attested in the middle of the Fifth dynasty of Egypt, although it is likely that he was worshipped much earlier; the term Khenti-Amentiu dates to at least the first dynasty, also as a pharaonic title   more
1 vote
0 comments
Osiris - Voter Comments
No Comments
Vote & Comment
5

Baal, also rendered Baʿal, is a North-West Semitic title and honorific meaning "master" or "lord" that is used for various gods who were patrons of cities in the Levant and Asia Minor, cognate to Akkadian Bēlu. A Baalist or Baalite means a worshippe... r of Baal."Baal" may refer to any god and even to human officials. In some texts it is used for Hadad, a god of thunderstorms, fertility and agriculture, and the lord of Heaven. Since only priests were allowed to utter his divine name, Hadad, Ba‛al was commonly used. Nevertheless, few if any biblical uses of "Baal" refer to Hadad, the lord over the assembly of gods on the holy mount of Heaven; most refer to a variety of local spirit-deities worshipped as cult images, each called baal and regarded in the Hebrew Bible in that context as a false god   more
0 votes
0 comments
Baal - Voter Comments
No Comments
Vote & Comment
7