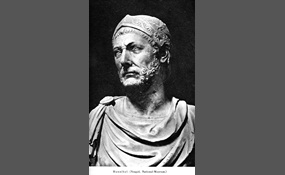 What ethnicity was Hannibal most likely?

PericIes says2015-07-24T23:06:38.6073930-05:00
Report Post
Is this a question? Carthage was a Phoenician colony that outlived and outgrew the motherland. The ruling class of the empire was of Phoenician descent. Hannibal was of the distinguished, ruling class Barca family, whom Barcelona is named after.
Vote & Comment
2

The term black people is an everyday English-language phrase, often used in socially-based systems of racial classification or of ethnicity to describe persons who are defined as belonging to a "black" ethnicity in their particular country, typicall... y having a degree of Sub-Saharan African ancestry, or who are perceived to be dark-skinned relative to other "racial groups".Different societies, such as Australia, Brazil, the United Kingdom, the United States and South Africa apply differing criteria regarding who is classified as "black", and these criteria have also varied over time. In some countries, social variables affect classification as much as skin color, and the social criteria for "blackness" vary. For example, in North America the term black people is not necessarily an indicator of skin color or ethnic origin but is more of a socially-based racial classification related to being African American, with a family history related to institutionalized slavery. In South Africa, mixed-race people are not considered to be "black", and in other regions, such as Australia and Melanesia, the term "black" has been applied to, and used by, populations with a very different history   more
0 votes
0 comments
Black - Voter Comments
No Comments
Vote & Comment
3

The Moors were the medieval Muslim inhabitants of the Maghreb, Iberian Peninsula, Sicily and Malta.The Moors invaded the Iberian Peninsula in 711 and called the territory Al-Andalus, an area which at its peak included what is today Gibraltar, most o... f Spain and Portugal, and parts of Southern France. There was also a Moorish presence in what is now Southern Italy, primarily in Sicily. They occupied Mazara on Sicily in 827 and in 1224 were expelled to the settlement of Lucera, which was destroyed in 1300. The religious difference of the Moorish Muslims led to a centuries-long conflict with the Christian kingdoms of Europe, called in Spain the Reconquista. The fall of Granada in 1492 saw the end of Muslim rule in Iberia.The term "Moors" has also been used in Europe in a broader sense to refer to Muslims, especially those of Arab or Berber descent, whether living in Spain or North Africa. During the colonial era the Portuguese introduced the names "Ceylon Moors" and "Indian Moors", in Sri Lanka. The Bengali Muslims were called Moors. Moors are not a distinct or self-defined people   more
0 votes
0 comments
Moorish - Voter Comments
No Comments
Vote & Comment
4

The Berbers or the Amazighs are the ethnicity indigenous to North Africa west of the Nile Valley. They are distributed from the Atlantic Ocean to the Siwa Oasis in Egypt, and from the Mediterranean Sea to the Niger River. Historically they spoke Ber... ber languages, which together form the "Berber branch" of the Afro-Asiatic language family. Since the Muslim conquest of North Africa in the seventh century, a large portion of Berbers have spoken varieties of Maghrebi Arabic, either by choice or obligation. After the invasion of north Africa by France people were "not only forced to speak French but that access to every non-French language was forbidden as well. Especially in school, Algerians were forced to speak French instead of their previous mother tongues; this included classical Arabic, the Berber language and all of its dialects. Algerians were required to speak a single language, French". Foreign languages like French and Spanish, inherited from former European colonial powers, are used by most educated Berbers in Algeria, Morocco, and Tunisia in some formal contexts such as higher education or business   more
0 votes
0 comments
Berbers - Voter Comments
No Comments
Vote & Comment
No comments yet.
Leave a comment...
(Maximum 900 words)
Privacy Policy | Terms of Use
Sitemap | View Desktop Version
©2020 Debate.org. All rights reserved.