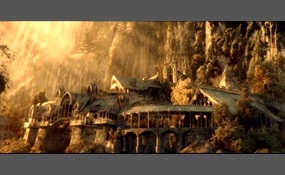 What Fantasy World Would You Like to Live in?

Choose your favourite fantasy world to live in (so don't necessarily decide on which has the best story going on, etc., but where you as a person would like to live). Only full fantasy worlds count, so... Sorry you Harry Potter Fans, but Hogwarts isn't a world of its own.

The world in which the Hobbit, the Lord of the Rings, the Silmarillion, and all those related Tolkien books take place. Populated by Humans, Elves, Dwarves, Orcs, Trolls, Dragons, Balrogs... Home to one of the largest, most well known, most epic, mo... st detailed fantasy series out there   more
6 votes
1 comment
Middle-Earth (Arda) - Voter Comments

An invention of the (sadly) late Sir Terry Pratchett. A world that rotates on the back of four elephants, which in turn stand upon the shell of a giant turtle, which swims through space. Populated by all kinds of strange peoples and species, and hos... t to forty hilarious, sometimes caricaturising novels   more
3 votes
2 comments
Discworld - Voter Comments

Lemmingburgh says2015-05-12T16:51:22.4497785-05:00
Report Post
Deciding between this and Middle-Earth was hard. Really, really hard. But ultimately, Discworld wins out (to me, that is), because it is incredibly hilarious and I honestly think living as a commoner on Discworld would be a lot more interesting than being a commoner in Middle-Earth, simply because Discworld's species' populations are more intermixed, and more of the events that take place not only directly affect, but directly involve the simple people (and, in contrast to Middle-Earth, in a relatively non-life threatening way).

Episteme says2015-05-12T17:11:27.5780910-05:00
Report Post
I agree. I think the Discworld would be such a fun place to be! The other's seem so cool, but as a commoner, you'd just be living in fear constantly and would likely die a most unsavoury death (especially in Westeros). At least if you died in the Discworld it would be a slightly more amusing experience.
Vote & Comment
3

The place that we all (well, a lot of us, anyways) came to love and cherish in our childhoods. You know, the place where all those Pokémon live.
3 votes
0 comments
The Pokémon World - Voter Comments
No Comments
Vote & Comment
4

You know, with that big lion. Created by C. S. Lewis, a land that is basically his view of heaven (as far as I understand? That's what the whole book 'The Last Battle' sounds like, anyway. Might be wrong, though). Features talking animals, oversize ...  animals, mythical creatures, and a horizon you can sail behind ('The Voyage of the Dawn Treader'), and lots more stuff   more
3 votes
0 comments
Narnia - Voter Comments
No Comments
Vote & Comment
5

I'm sure I missed some major Fantasy worlds, so please feel free to express other worlds you would like to live in here (or in the comments, so I can add an answer)...
3 votes
3 comments
Other - Voter Comments

Created by Christopher Paolini and populated by Elves, Dwarves, Humans, Urgals, and Dragons. The Eragon books take place here. Like Middle-Earth and Westeros, this is just a continent/country in a larger world, but I don't know what to call the worl... d (please tell me if you do)   more
1 vote
0 comments
Alagaësia - Voter Comments
No Comments
Vote & Comment
7

The one from Cornelia Funke's Reckless, that is. A world caught in a war and an industrial revolution where Grimm's fairytales are true, but the dark original versions, not the child-safe ones of today. Reachable through a certain mirror, where one ... has to put one's hand over one's face to travel between the worlds. Has the shape of Europe, but still counts because all of it is different from actual Europe, borders are drawn differently, and it is completely populated by fairytale creatures   more
0 votes
0 comments
Mirrorworld - Voter Comments
No Comments
Vote & Comment
8

From the 'His Dark Materials' Trilogy by Philip Pullman. A world similar to, yet different from our own. Every person has a daemon, which is basically a soul in shape of a talking animal, specific to each person's character. The world itself is in a...  kind of industrial revolution-age. It is populated by humans (with daemons), witches (daemons too), and armoured polar bears. Again, I could not find a better or more accurate name for this world   more
0 votes
0 comments
Lyra's World - Voter Comments
No Comments
Vote & Comment
9

Actually, not just Westeros, but the whole world it is in, but let's still refer to it as Westeros anyway, since I don't know what else to name it. Populated mainly by humans, but also dragons, so-called Children of the Forest, and Others, this is t... he backdrop to George R. R. Martin's Song of Ice and Fire/Game of Thrones Series   more
0 votes
0 comments
Westeros - Voter Comments
No Comments
Vote & Comment
Leave a comment...
(Maximum 900 words)

Episteme says2015-05-12T17:10:59.5198506-05:00
Report Post
Love this poll!!! However, isn't Narnia sorta like the Wizarding World in Harry Potter? It's still kinda connected to "our world" in the books. They did have to go through the wardrobe afterall. I get that the Wizarding World is more connected to "our world", but Narnia is still connected too. It's not as separate as Middle-Earth or Discworld. Stephen King's 'Dark Tower' series is a mix as well.

Lemmingburgh says2015-05-12T17:18:16.4190518-05:00
Report Post
Well, as far as I understand, Narnia is in fact a separate world, but with connections to ours, through which one can travel. The Wizarding World is a collection of places within this world, protected from detection by Muggle through certain spells. Kind of like a different country reachable through a hidden tunnel in your own country versus a collection of hidden caves in your own country. Glad you liked the poll, though.

Episteme says2015-05-12T17:23:08.9020796-05:00
Report Post
I like polls like this sometimes, it's a nice break from the politics on the site. I get what you mean. Really well explained, thanks. I just wonder, and I know this is sci-fi and not fantasy, what Doctor Who would be. Since he can travel through 'our world' and other worlds and times.