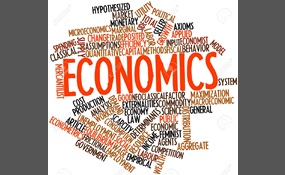 What form of economics do you believe would be most beneficial to humanity?

I'm only putting two choices: Laissez-faire capitalism and responsible capitalism/social democracy since those I think are the most popular and plus it wouldn't post when I had many options. You can add your own choice if you wish of course.

Knaveslayer99 says2016-11-27T09:11:20.7180971Z
Report Post
Marxism/Leninism is easily one of the best forms of economics as it benefits everyone and helps progress and advancements as there is nothing preventing progress from being made.
Vote & Comment
5

All the services that the people collectively believe are necessary for the people are owned by the state, as oppose to private corporations. It's basically socialism, but specifically centers itself around democracy. Stalin, Hitler and Castro are N... OT examples of social democrats- they're just plain socialist. An example of a social democrat is Labour leader Jeremy Corbyn of the UK   more
1 vote
1 comment
Social democracy - Voter Comments

Radical Communism (invented by me)

A large democratic federalist state almost entirely flexible save on what I consider to great moral wrongs of the world 1 money 2 property 3 hyper nationalism 4 radical Religions (cults) and 5 cars. In this state the economy is based on fairness and...  equality; all are equally educated in their chosen field of study, and all are feed equally (if there's a drought or a famine then a town assembly is called to deside how to deal with it by rations or cuts or anything they can think off)   more
1 vote
0 comments
Radical Communism (invented by me) - Voter Comments
No Comments
Vote & Comment
14

Coveny says2017-04-24T20:50:47.1848027Z
Report Post
Pure capitalism doesn't take care of the weak, and pure socialism doesn't incentivize the best and brightest. The most stable and effective governments in the world operate in various forms of hybrid capitalism and socialism.
Vote & Comment
16

Confederism is the political and economic idea of giving more power to individual states in which the states have the right to be Fascist or Communist but swear loyalty to the country as a whole and must follow certain guidelines to prevent a single...  state overwhelming/invading the other states. The idea is that once a leader is selected for each state they then form a Confederacy led by a single leader who represents the country   more
0 votes
0 comments
Democratic Confederism - Voter Comments
No Comments
Vote & Comment
28

triangle.128k says2016-11-26T06:11:57.2703154Z
Report Post
@reece Ideally public spending should be cut and shifted to the free market to lower taxes. I see nothing wrong with giving people economic liberty.

reece says2016-11-26T06:35:57.8771500Z
Report Post
@Triangle Ideally you think they'll invest back into the economy and the market will regulate itself if there weren't any regulations. You're an anarcho-capitalist. Just look what's happening in North Dakota. The oil company has hired a private security Firm to deal with the protesters. Trump has stocks in the company. Do you know what picture i'm painting? You'd just be creating even larger monopolies.

triangle.128k says2016-11-26T06:38:45.2974232Z
Report Post
@reece You know what helped most monopolies come to existence? Government regulations. And no I am not an anarcho-capitalist. I am laissez-faire, I favor minimal regulation in the economy. I never stated government should *absolutely stay out* and that regulations shouldn't exist. All I'm saying is that the government is currently too involved.

reece says2016-11-26T07:02:25.7333285Z
Report Post
@triangle.128k The government has to be actively involved, it's just in the manner they do it. The only reason politicians would have bias is if they have their own private 'interests' to mind.

triangle.128k says2016-11-26T07:08:50.3069937Z
Report Post
@reece No they don't. The more I learn about economics and business, the more I see how the government is harming the process and natural business cycle. Free markets would ensure that everybody's standard of living increases, and make it easier for larger companies to get out competed by smaller ones. Also, politicians' private interests have nothing to do with regulations, except for maybe setting regulations that benefit big corporations because of lobbyism.

reece says2016-11-26T07:29:39.6098020Z
Report Post
@triangle.128k Who cares about personal experience. Let's talk objectively. Objectively a corporation is a money machine. It won't care if it crushes or merges with other companies, let alone suppressing their products. As long as the bottom line is meet. Private interests would include both lobbyism and investments.

Capitalistslave says2016-12-22T00:41:56.7822884Z
Report Post
Who is the idiot who put democracy on here? That's a form of government, and not a form of economics. They literally voted for a non-answer
Privacy Policy | Terms of Use
Sitemap | View Desktop Version
©2022 Debate.org. All rights reserved.