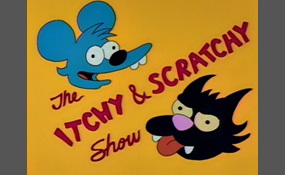 What, in your opinion, is the best TV show ever?

The Simpsons is an American adult animated sitcom created by Matt Groening for the Fox Broadcasting Company. The series is a satirical depiction of a middle class American lifestyle epitomized by the Simpson family, which consists of Homer, Marge, B... art, Lisa, and Maggie. The show is set in the fictional town of Springfield and parodies American culture, society, television, and many aspects of the human condition.The family was conceived by Groening shortly before a solicitation for a series of animated shorts with the producer James L. Brooks. Groening created a dysfunctional family and named the characters after members of his own family, substituting Bart for his own name. The shorts became a part of The Tracey Ullman Show on April 19, 1987. After a three-season run, the sketch was developed into a half-hour prime time show and was an early hit for Fox, becoming the network's first series to land in the Top 30 ratings in a season.Since its debut on December 17, 1989, the show has broadcast 560 episodes, and the 26th season began on September 28, 2014   more
1 vote
0 comments
The Simpsons - Voter Comments
No Comments
Vote & Comment
4

Firefly is an American television series space western drama created by writer and director Joss Whedon, under his Mutant Enemy Productions label. Whedon served as an executive producer, along with Tim Minear. The series is set in the year 2517, aft... er the arrival of humans in a new star system; and it follows the adventures of the renegade crew of Serenity, a "Firefly-class" spaceship. The ensemble cast portrays the nine characters who live on Serenity. Whedon pitched the show as "nine people looking into the blackness of space and seeing nine different things".The show explores the lives of a group of people who fought on the losing side of a civil war and others who now make a living on the fringe of society, as part of the pioneer culture that exists on the fringes of their star system. In this future, the only two surviving superpowers, the United States and China, fused to form the central federal government, called the Alliance, resulting in the fusion of the two cultures. According to Whedon's vision, "nothing will change in the future: technology will advance, but we will still have the same political, moral, and ethical problems as today"   more
1 vote
0 comments
Firefly - Voter Comments
No Comments
Vote & Comment
6

Shark Tank is an American reality competition series that premiered August 9, 2009, on ABC. The show features aspiring entrepreneurs making business presentations to a panel of potential investors. It is based on the international Dragons' Den forma... t. A Portuguese version of the show is to be released in January 2015, as well as an Australian version to be released in that same year. The 100th episode aired on November 14, 2014. The 101st episode had Nick Woodman, the CEO and founder of GoPro, as a guest shark   more
0 votes
0 comments
Shark Tank - Voter Comments
No Comments
Vote & Comment
8

The Rocky and Bullwinkle Show

The Rocky & Bullwinkle Show is an American animated television series that originally aired from November 19, 1959, to June 27, 1964, on the ABC and NBC television networks. Produced by Jay Ward Productions, the series is structured as a variety sho... w, with the main feature being the serialized adventures of the two title characters, the anthropomorphic moose Bullwinkle and flying squirrel Rocky. The main adversaries in most of their adventures are the Russian-like spies Boris Badenov and Natasha Fatale. Supporting segments include Dudley Do-Right, Peabody's Improbable History, and Fractured Fairy Tales, among others.Rocky & Bullwinkle is known for quality writing and wry humor. Mixing puns, cultural and topical satire, and self-referential humor, it appealed to adults as well as children. It was also one of the first cartoons whose animation was outsourced; storyboards were shipped to Gamma Productions, a Mexican studio also employed by Total Television. The art has a choppy, unpolished look and the animation is extremely limited even by television animation standards at the time   more
0 votes
0 comments
The Rocky and Bullwinkle Show - Voter Comments
No Comments
Vote & Comment
9

Star Trek is an American science fiction television series created by Gene Roddenberry that follows the adventures of the starship USS Enterprise and its crew. It later acquired the retronym of Star Trek: The Original Series to distinguish the show ... within the media franchise that it began.The show is set in the Milky Way galaxy, roughly during the 2260s. The ship and crew are led by Captain James T. Kirk, first officer and science officer Spock, and chief medical officer Leonard McCoy. Shatner's voice-over introduction during each episode's opening credits stated the starship's purpose:Space: the final frontier. These are the voyages of the starship Enterprise. Its five-year mission: to explore strange new worlds, to seek out new life and new civilizations, to boldly go where no man has gone before.The series was produced 1966–67 by Desilu Productions, and by Paramount Television 1968–69. Star Trek aired on NBC from September 8, 1966 to June 3, 1969. Star Trek '​s Nielsen ratings while on NBC were low, and the network canceled it after three seasons and 79 episodes   more
0 votes
0 comments
Star Trek: The Original Series - Voter Comments
No Comments
Vote & Comment
10

Reba is an American sitcom starring Reba McEntire, which ran from 2001 to 2007. For the show's first five seasons, it aired on The WB, and crossed over to The CW for its final season. It is one of only a few series on The WB that was not produced by...  Warner Bros. Television   more
0 votes
0 comments
Reba - Voter Comments
No Comments
Vote & Comment
11

Storm Chasers is an American documentary reality television series that premiered on October 17, 2007, on the Discovery Channel. Produced by Original Media, the program follows several teams of storm chasers as they attempt to intercept tornadoes in...  Tornado Alley in the United States. Season 5 commenced on September 25, 2011. The show was canceled by Discovery Communications on January 21, 2012   more
0 votes
0 comments
Storm Chasers - Voter Comments
No Comments
Vote & Comment
12

Roseanne is an American sitcom that was broadcast on ABC from October 18, 1988, to May 20, 1997. Starring Roseanne Barr, the show revolved around the Conners, an Illinois working-class family. The series reached #1 in the Nielsen ratings becoming th... e most watched television show in the United States from 1989 to 1990, and remained in the top four for six of its nine seasons, and in the top twenty for eight seasons, TV Guide rated "Roseanne" as one of the greatest shows of all time.In 1993, the episode "A Stash from the Past" was ranked #21 on TV Guide's 100 Greatest Episodes of All-Time. In 2002, Roseanne was ranked #35 on TV Guide's 50 Greatest TV Shows of All Time   more
0 votes
0 comments
Roseanne - Voter Comments
No Comments
Vote & Comment
13

Neon Genesis Evangelion, commonly referred to as NGE, Evangelion or Eva, is a Japanese animated television series produced by Tatsunoko Productions and Gainax and directed by Hideaki Anno. It was broadcast on TV Tokyo from October 1995 to March 1996... . The original Japanese cast of the show includes the voice actors and singers Megumi Ogata as Shinji Ikari, Megumi Hayashibara as Rei Ayanami, and Yūko Miyamura as Asuka Langley Soryu. The music was composed by Shirō Sagisu and would top the Oricon charts upon release; the theme song continues to receive recognition for its lasting impact in the decades after its release. The Evangelion franchise also includes a movie tetralogy, Rebuild of Evangelion, and several spin-off anime, manga and video game series.Evangelion is an apocalyptic anime in the mecha genre. The series is set in a futuristic Tokyo, fifteen years after a worldwide cataclysm. The main story centers on Shinji, a teenage boy who is recruited by the shadowy organization NERV to pilot a giant bio-machine called an Evangelion in combat against monstrous beings known as Angels   more
0 votes
0 comments
Neon Genesis Evangelion - Voter Comments
No Comments
Vote & Comment
No comments yet.
Leave a comment...
(Maximum 900 words)
Privacy Policy | Terms of Use
Sitemap | View Desktop Version
©2020 Debate.org. All rights reserved.