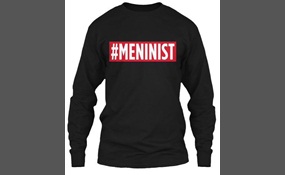 Someone who hates 3rd wave feminists, but not all women.

They feel that modern feminism is discriminating against men and isn't about equality due to its focus exclusively on women's issues. They respond to this, somewhat ironically, by doing the same thing for men's issues.
3 votes
2 comments
Someone who hates 3rd wave feminists, but not all women. - Voter Comments

Someone who wants to show that feminism is a joke

A 100% good person who supports equality for all races, genders, and classes

1 vote
0 comments
A 100% good person who supports equality for all races, genders, and classes - Voter Comments
No Comments
Vote & Comment
6

Someone who hates women

Sophia13 says2015-05-11T21:42:49.2868451-05:00
Report Post
@PeterSmith I know it's obvious that they should be called masculists, but you see, they tried to start a political movement without a full understanding of the English language. Meninism was the result.

Stefy says2015-05-11T22:09:37.5752948-05:00
Report Post
When they say they want equality for all and call themaelves menenists it usually means they believe sexism is gone and there is equality and they want women to shut up. Its really annoying actually. Im glad youre calling attention to it.

briantheliberal says2015-05-12T02:10:38.7743942-05:00
Report Post
Meninism is a counter-movement to feminism that takes a satirical approach to somewhat serious issues by pointing out obvious double-standards and hypocrisy against male issues in society. It is mostly a joke, but many of the claims made my "meninists" are valid. The problem is they also bash women in the process which is not the best way to bring attention to these issues. But like I said, to me, it appears satirical.