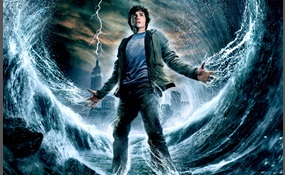 What is better, Harry Potter, The Hunger Games, or Percy Jackson

Perseus "Percy" Jackson is a fictional character, the title character and narrator of Rick Riordan's Percy Jackson & the Olympians series and a protagonist in the sequel series The Heroes of Olympus, which are part of the Camp Half-Blood chronicles....  Percy is the son of Poseidon in The Heroes of Olympus and Percy Jackson & The Olympains. He begins in The Lightning Thief as a troubled twelve-year-old boy with dyslexia and ADHD. When his class takes a field trip to the Metropolitan Museum of Art, one of his teachers turns into a Fury and attacks him. His friend Grover Underwood then reveals himself to be a satyr and takes Percy to Camp Half-Blood, a place where demigods can train. Percy then learns that he, as a child of Poseidon, is mentioned in the Great Prophecy given by the Oracle. In the remainder of the series, Percy, with the help of his new friends, Annabeth Chase, and Grover Underwood, fights to defeat the forces of Kronos and other Titans to save the camp, and the world. In The Heroes of Olympus, Percy starts off the series missing. Annabeth Chase and his other friends are searching for him   more
8 votes
1 comment
Percy Jackson - Voter Comments

CJKAllstar says2014-05-30T13:44:18.3097212-05:00
Report Post
Part 1: I am a sucker for dystopian fiction, but behind the shallow, popular outlook that this story brings, there is a lot of symbolism and meaning to it, symbolism too important to glance over. SPOILERS AHEAD. Firstly, Panem represents humanity, where the Capitol is us, first world citizens. Where there is hunger, starvation and death, we are enjoying out selfies and our duckfaces. The crazy make up and hairstyles that they wore was an emphasis on how relatively, compared to the 1 billion who do not have sanitation for example, we live weirdly, where we struggle with choosing a Gucci or Ralph Lauren top. President Snow, I see as the idea of decorum. The general consensus and the norm in society. What people in a first world society generally are led to think and believe. It comes off as fabulous, normal and fine. Yes, people are dying, but it is for a good cause. The same way the general consensus is told to believe that there is not much which can be done about suffering. President Snow is decorum, and those with different views are killed. Those like Cinna, who fight and question the norm and want to make a change, are silenced. We are all slaves to the norm, which is why we continue doing things as we do. Those who suffer, from District 1 - 13 are those who live in poverty, are the billions of people who live with under $2 a day. They suffer and starve, yet with their peril we are all made richer. This is emphasized greatly by the fact that what they produce in the Hunger Games is given straight to the Capitol. That is what happens in society.

CJKAllstar says2014-05-30T13:44:31.5541212-05:00
Report Post
Part 2: The idea of a "Hunger Games" in itself is used to wrap all these points. It is brutal murder, brought on by the norm, yet the norm disguises it and makes it seem okay. People in sweatshops suffer, but it is clothed to seem like it is fine. Those who suffer clearly see what is wrong with it, but too bad their perspective cannot be seen. In the end, we don't need cheap Primark bracelets the same way the Hunger Games is futile, but it makes us and the Capitol happy which is all that matters. The brutal slaying of themselves is because those who do suffer have to suffer and do things they do not want to for humanity. There will be a victor in the Hunger Games, but usually they are left scarred. Look at Catching Fire and Mockingjay. All the previous victors suffered. Even when they fulfill our wishes, when some are lucky, they are thrown back into suffering and in many cases, made worse, like Haymich or Finnick Odair being made into a prostitute. Again, this represents the growing inequality gap and how in a society where the poor help the rich, no matter how hard they try, the rich will benefit. So many are lost along the way because of this. Deaths from disease, to suicide. Then you have Katniss. The face of challenging the rebellion. Her very existence represents the idea of a social revolution. Think about it. In the end, she doesn’t shoot Snow, she shoots Coin. This is symbolism, once again. One person cannot end the norm, because the norm is only there, and society has to accept it. You cannot shoot decorum, but if you inspire enough people, it will collapse on its own. The ambiguity with Snow’s death I feel shows this. Whereas Coin’s view would be the new norm, if he replaced it, and it is possible for one to instigate a new norm, as we see in various countries with their rebellions and coups. Thailand, Ukraine, etc. If Coin’s norm was instigated, then things would be just as bad as before. Katniss, being the face of righteous social revolution, deflected any bullets into the gap for social change. In a time of chaos caused by her for the good, she had to stop it from becoming more chaotic and make it one of the people. This is the problem with so many rebellions today. Right intention, but then they hold their own views, which they view as right. They aren’t doing it to stop the leader, but to make themselves the leader. Which is why Katniss wasn’t president.

CJKAllstar says2014-05-30T13:44:42.0061212-05:00
Report Post
Part 3: Katniss is the representation of just rebellion for social change, but now what did it. This is why she is the “Mockingjay”. This is why I did not say she actually fought and did it all by herself. Being the idea of rebellion, it was those who fought her who represented the idea of just soldiers, the actual people who also want to take part. Those who Katniss’ being allowed her to attack. Hell, Plutarch makes this obvious. Those who helped her, those like Prim were those who fought for the rebellion, and they symbolise the actual fighters of social change. Every character in the Hunger Games serves a role. Katniss’ mother, bringing her up the way she did you could say represented somebody who was truly scarred by society (with her Husband’s death) but dealt with it the right way, and only brought good out of her. Gale is the darker side of social change, the side that always corrupts it but was there in the story alongside Coin to show what Katniss was, just, social rebellion in the face of an evil societal norm. You could go as specific as the trainers, who could easily show people so blinded by the norm they are enforcing it without knowing, those directly influenced by brainwashing. Let’s take Peeta, who’s existence in the book is not just to be useless and paint himself, but to show what one of these sufferers is like in the face of social change. He hides behind Katniss in the first book, hides less in the third, is forcedly corrupted by Snow I the last but comes out and saves Katniss from suicide. An ordinary poor person or somebody who is suffering is clearly going to be the target of the norm in a social change. The one who doesn’t know what to do, who is lost but wants to help. The ones open to brutal attack from the general consensus but in the end becomes one with it, for he is the cause of it and is the one to be greatly attached to it. The Hunger Games trilogy is one massive allegory for society and how people are corrupted under a norm, with the poorer and oppressed force to support them and suffer, but also the social change needed to change that and how people are going to be affected. It is a brilliant piece if read this way, and make the other two look like shallow teen fiction read as a pastime when you’re waiting for you movie ads to finish. The Hunger Games trumps these two, because it not only has a compelling story and characters, but this whole message behind it.

derplington says2014-06-12T09:02:13.1662229-05:00
Report Post
I liked the Percy Jackson series more. And trust me, my dad read me every single Harry potter book when I was 5 or 6, so I definitely had a childhood. I just though the Percy Jackson series of BOOKS were better. The movies sucked. The Harry Potter movies were amazing, but my vote is for books.
Privacy Policy | Terms of Use
Sitemap | View Desktop Version
©2021 Debate.org. All rights reserved.