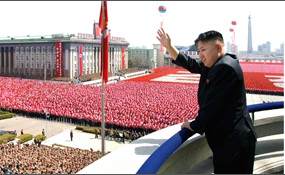 What is the 4th strongest Nation.

After Russia/USA/China. This is (military + economy + resources)

India, officially the Republic of India, is a country in South Asia. It is the seventh-largest country by area, the second-most populous country with over 1.2 billion people, and the most populous democracy in the world. Bounded by the Indian Ocean ... on the south, the Arabian Sea on the south-west, and the Bay of Bengal on the south-east, it shares land borders with Pakistan to the west; China, Nepal, and Bhutan to the north-east; and Burma and Bangladesh to the east. In the Indian Ocean, India is in the vicinity of Sri Lanka and the Maldives; in addition, India's Andaman and Nicobar Islands share a maritime border with Thailand and Indonesia.Home to the ancient Indus Valley Civilisation mostly in present day Pakistan and a region of historic trade routes and vast empires, the Indian subcontinent was identified with its commercial and cultural wealth for much of its long history. Four religions—Hinduism, Buddhism, Jainism, and Sikhism—originated here, whereas Judaism, Zoroastrianism, Christianity, and Islam arrived in the 1st millennium CE and also helped shape the region's diverse culture   more
15 votes
5 comments
India - Voter Comments

Diqiucun_Cunmin says2015-05-06T06:34:25.4952674-05:00
Report Post
As far as human resources goes, Germany, the UK and France can't compare. Potential GDP will probably rise well above the three in the future. Dunno about military, so I'll ignore that aspect.

The United Kingdom of Great Britain and Northern Ireland, commonly known as the United Kingdom or Britain, is a sovereign state in Europe. Lying off the north-western coast of the European mainland, the country includes the island of Great Britain, ... the north-eastern part of the island of Ireland, and many smaller islands. Northern Ireland is the only part of the UK that shares a land border with another state: the Republic of Ireland. Apart from this land border, the UK is surrounded by the Atlantic Ocean, with the North Sea in the east and the English Channel in the south. The Irish Sea lies between Great Britain and Ireland. The UK has an area of 243,610 square kilometres, making it the 78th-largest sovereign state in the world and the 11th-largest in Europe.The United Kingdom is the 22nd-most populous country, with an estimated 64.1 million inhabitants. It is a constitutional monarchy with a parliamentary system of governance. Its capital city is London, an important global city and financial centre with the second-largest urban area in Europe, and its metropolitan area is the largest in European Union, with a population of about 14 million according Eurostat   more
5 votes
0 comments
United Kingdom - Voter Comments
No Comments
Vote & Comment
3

France, officially the French Republic, is a unitary sovereign state comprising territory in western Europe and several overseas regions and territories. Metropolitan France extends from the Mediterranean Sea to the English Channel and the North Sea... , and from the Rhine to the Atlantic Ocean; due to its shape, it is often referred to in French as l’Hexagone. France is one of only three countries to have both Atlantic and Mediterranean coastlines. France has a population of 66 million. France is a semi-presidential republic with its capital in Paris, the nation's largest city and the main cultural and commercial center. The Constitution of France establishes the country as secular and democratic, with its sovereignty derived from the people.During the Iron Age, what is now France was inhabited by the Gauls, a Celtic people. The Gauls were conquered by the Roman Empire in 51 BC, which held Gaul until 486. The Gallo-Romans faced raids and migration from the Germanic Franks, who dominated the region for hundreds of years, eventually creating the medieval Kingdom of France   more
4 votes
1 comment
France - Voter Comments

Japan is an island nation in East Asia. Located in the Pacific Ocean, it lies to the east of the Sea of Japan, China, North Korea, South Korea and Russia, stretching from the Sea of Okhotsk in the north to the East China Sea and Taiwan in the south....  The characters that make up Japan's name mean "sun-origin", which is why Japan is often referred to as the "Land of the Rising Sun".Japan is a stratovolcanic archipelago of 6,852 islands. The four largest islands are Honshu, Hokkaido, Kyushu, and Shikoku, which together comprise about ninety-seven percent of Japan's land area. Japan has the world's tenth-largest population, with over 126 million people. Honshū's Greater Tokyo Area, which includes the de facto capital of Tokyo and several surrounding prefectures, is the largest metropolitan area in the world, with over 30 million residents.Archaeological research indicates that people lived in Japan as early as the Upper Paleolithic period. The first written mention of Japan is in Chinese history texts from the 1st century AD. Influence from other regions, mainly China, followed by periods of isolation, particularly from Western European influence, has characterized Japan's history   more
3 votes
0 comments
Japan - Voter Comments
No Comments
Vote & Comment
5

Israel, officially the State of Israel, is a country in Western Asia, situated at the southeastern shore of the Mediterranean Sea. It shares land borders with Lebanon to the north, Syria in the northeast, Jordan on the east, the Palestinian territor... ies comprising the West Bank and Gaza Strip on the east and southwest, respectively, and Egypt and the Gulf of Aqaba in the Red Sea to the south. It contains geographically diverse features within its relatively small area. Israel's financial center is Tel Aviv, while Jerusalem is the country's most populous city and its designated capital, although Israeli sovereignty over Jerusalem is not recognized internationally.On 29 November 1947, the United Nations General Assembly recommended the adoption and implementation of the Partition Plan for Mandatory Palestine. The end of the British Mandate for Palestine was set for midnight on 14 May 1948. That day, David Ben-Gurion, the Executive Head of the Zionist Organization and president of the Jewish Agency for Palestine, declared "the establishment of a Jewish state in Eretz Israel, to be known as the State of Israel," which would start to function from the termination of the mandate   more
1 vote
1 comment
Israel - Voter Comments

New Zealand is an island country in the southwestern Pacific Ocean. The country geographically comprises two main landmasses – that of the North Island, or Te Ika-a-Māui, and the South Island, or Te Waipounamu – and numerous smaller islands. New Zea... land is situated some 1,500 kilometres east of Australia across the Tasman Sea and roughly 1,000 kilometres south of the Pacific island areas of New Caledonia, Fiji, and Tonga. Because of its remoteness, it was one of the last lands to be settled by humans. During its long isolation, New Zealand developed a distinctive biodiversity of animal, fungal and plant life. The country's varied topography and its sharp mountain peaks, such as the Southern Alps, owe much to the tectonic uplift of land and volcanic eruptions. New Zealand's capital city is Wellington, while its most populous city is Auckland.Polynesians settled New Zealand in 1250–1300 CE and developed a distinctive Māori culture. Abel Tasman, a Dutch explorer, was the first European to sight New Zealand in 1642 CE. In 1840, the British Crown and Māori signed the Treaty of Waitangi, making New Zealand a British colony   more
1 vote
1 comment
New Zealand - Voter Comments

Germany, officially the Federal Republic of Germany, is a federal parliamentary republic in western-central Europe consisting of 16 constituent states, which retain limited sovereignty. Its capital and largest city is Berlin. Germany covers an area ... of 357,021 square kilometres and has a largely temperate seasonal climate. With 80.6 million inhabitants, it is the most populous member state in the European Union. Germany is a major economic and political power of the European continent and a historic leader in many cultural, theoretical and technical fields. After the United States, Germany is the second most popular migration destination in the world.Various Germanic tribes have occupied what is now northern Germany and southern Scandinavia since classical antiquity. A region named Germania was documented by the Romans before AD 100. During the Migration Period that coincided with the decline of the Roman Empire, the Germanic tribes expanded southward and established kingdoms throughout much of Europe. Beginning in the 10th century, German territories formed a central part of the Holy Roman Empire   more
1 vote
1 comment
Germany - Voter Comments

Lemmingburgh says2015-05-13T12:04:08.4463515-05:00
Report Post
I would add the European Union as 4th, but Germany has the largest economy and largest population in the EU and also has a lot of political importance there - although the German military sucks.
Vote & Comment
10

Kira_03 says2015-05-06T14:47:34.4377918-05:00
Report Post
Japan, India, and Saudi Arabia are all tempting answers, but you've added the strongest West European Powers...Who perhaps alone may not be as strong in all three subjects, but if the European Union were an option I'd place them in the fourth spot.

PericIes says2015-05-06T22:11:16.7446527-05:00
Report Post
I... Really don't know how India is beating France. You want to say India is fifth? Fine. But France is much more powerful. I suspect peoples' main incentive for voting India is that India has such a high population. The population is nearly irrelevant in this context. France has a larger economy, a wider sphere of influence, is a permanent member of the U.N. security council, still has colonies and bases all over the world (i.E. French Guiana, St. Pierre and and Miquelon, etc.), is a first-world country with more and more powerful allies, has the third largest nuclear weapons arsenal in the world (after the U.S. and Russia), and has a *vastly* superior military in terms of both quality and power projection. The power projection is extremely important. It nullifies India's population advantage. India might have over a billion people, but if it can't move those people to where the fighting is, they're more of a liability than an advantage.

PillowForce says2015-05-07T09:45:03.6724161-05:00
Report Post
Dbushwacker Japan, while still in control of a fairly good army, is one of the greatest if not the greatest technological power. Saudi Arabia in the other hand, has main power in energy as a whole. The world would definitely change without them.

Russia_The_almighty says2015-05-11T16:17:33.6182137-05:00
Report Post
@Pillowforce www.globalfirepower.com Russia could shut Japan with its much better cyber warfare. Its Sukhoi-su 30 or 35 could take out any fighter Japan could throw at them. Its Superior navy could defeat the Japanese fleet and bombard them with their aircraft. Once Japan is good and weakened they can invade, simple as that. Israel couldn't invade because, well their navy isn't good enough, but Israel could defend until Japan got sick of this war along with attack with arguably the best cyber warfare besides maybe China. Israel vs Saudi Arabia, massive cyber attack and a few ballistic missiles and we have a winner as Israel.