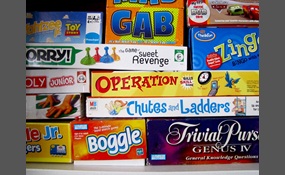 What is the best board game?

There are so many board games. I chose 5 reasonable board games for you guys to vote on.

Monopoly is a board game published by Parker Brothers, a subsidiary of Hasbro. The game is named after the economic concept of monopoly, the domination of a market by a single entity. Monopoly is a redesign of an earlier game "The Landlord's Game", ... first published by the Quaker and political activist Elizabeth Magie. The purpose of that game was to teach people how monopolies end up bankrupting the many and giving extraordinary wealth to one or few individuals.Since the game was created, more than one billion people have played it, making it "the most played (commercial) board game in the world. The 1999 Guinness Book of Records cited Hasbro's previous statistic of 500 million people having played Monopoly. Games Magazine has inducted Monopoly into its Hall of Fame   more
8 votes
1 comment
Monopoly - Voter Comments

Risk is a strategy board game produced by Parker Brothers. It was invented by French film director Albert Lamorisse and originally released in 1957 as La Conquête du Monde in France. It was later bought by Parker Brothers and released in 1959 with s... ome modifications to the rules as Risk: The Continental Game, then as Risk: The Game of Global Domination.Risk is a turn-based game for two to six players. The standard version is played on a board depicting a political map of the Earth, divided into forty-two territories, which are grouped into six continents. The object of the game is to occupy every territory on the board and in doing so, eliminate the other players. Players control armies with which they attempt to capture territories from other players, with results determined by dice rolls   more
6 votes
2 comments
Risk - Voter Comments

Communist monopoly is a board game designed after the economic concept of Communism. All money is equally divided among everyone. There is no private property anybody can buy unlike regular Monopoly. Nobody can go bankrupt so the board game is endle... s   more
2 votes
1 comment
Communist "Monopoly" - Voter Comments

Chess is a two-player strategy board game played on a chessboard, a checkered gameboard with 64 squares arranged in an eight-by-eight grid. It is one of the world's most popular games, played by millions of people worldwide in homes, parks, clubs, o... nline, by correspondence, and in tournaments. In recent years, chess has become part of some school curricula.Each player begins the game with 16 pieces: one king, one queen, two rooks, two knights, two bishops, and eight pawns. Each of the six piece types moves differently. The objective is to 'checkmate' the opponent's king by placing it under an inescapable threat of capture. To this end, a player's pieces are used to attack and capture the opponent's pieces, while supporting their own. In addition to checkmate, the game can be won by voluntary resignation by the opponent, which typically occurs when too much material is lost, or if checkmate appears unavoidable. A game may also result in a draw in several ways, where neither player wins. The course of the game is divided into three phases: opening, middlegame, and endgame   more
2 votes
0 comments
Chess - Voter Comments
No Comments
Vote & Comment
5
VOTING CLOSED

Uno is an American card game which is played with a specially printed deck. The game was originally developed in 1971 by Merle Robbins in Reading, Ohio, a suburb of Cincinnati. It has been a Mattel product since 1992. The game's general principles p... ut it into the Crazy Eights family of card games   more
1 vote
0 comments
Uno - Voter Comments
No Comments
Vote & Comment
6
VOTING CLOSED

Candy Land is a simple racing board game. The game requires no reading and minimal counting skills, making it suitable for young children.Due to the design of the game, there is no strategy involved—players are never required to make choices, just f... ollow directions. The winner is predetermined by the shuffle of the cards   more
1 vote
0 comments
Candy Land - Voter Comments
No Comments
Vote & Comment
7
VOTING CLOSED

Farkle, or Farkel, is a dice game that has also been called or is similar to 1000/5000/10000, Cosmic Wimpout, Greed, Hot Dice, Squelch, Zilch, Zonk, or Darsh to name but a few. Its origins as a folk game are unknown, but it has been marketed commerc... ially since 1982, since 1996 under the brand name Pocket Farkel by Legendary Games Inc. While the basic rules are well-established, there is a wide range of variation in both scoring and play, as described below   more
0 votes
0 comments
Farkle - Voter Comments
No Comments
Vote & Comment
8
VOTING CLOSED

Yahtzee is a dice game made by Milton Bradley, which was first marketed as "Yatzie" by National Association Service of Toledo, Ohio, in the early 1940s. Yatzie was included in a game set called "LUCK - 15 Grand Dice Games". It was marketed under the...  name of Yahtzee by game entrepreneur Edwin S. Lowe in 1956. The game is a development of earlier dice games such as Yacht, Generala, and Yogi. A public domain version of Yahtzee, which is popular especially in Scandinavia, is Yatzy. Yahtzee is also similar to the English game of Poker Dice and the Cheerio dice game.The object of the game is to score the most points by rolling five dice to make certain combinations. The dice can be rolled up to three times in a turn to try to make one of the thirteen possible scoring combinations. A game consists of thirteen rounds during which the player chooses which scoring combination is to be used in that round. Once a combination has been used in the game, it cannot be used again.The scoring combinations have varying point values, some of which are fixed values and others of which have the cumulative value of the dice. A Yahtzee is five-of-a-kind and holds the game's highest point value of 50   more
0 votes
0 comments
Yahtzee - Voter Comments
No Comments
Vote & Comment
Leave a comment...
(Maximum 900 words)