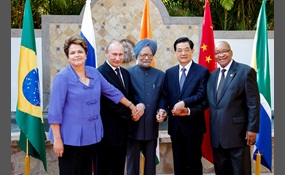 What is the best BRICS nation?

Use your own criteria to evaluate the countries, but explain your choice in the comments.

India, officially the Republic of India, is a country in South Asia. It is the seventh-largest country by area, the second-most populous country with over 1.2 billion people, and the most populous democracy in the world. Bounded by the Indian Ocean ... on the south, the Arabian Sea on the south-west, and the Bay of Bengal on the south-east, it shares land borders with Pakistan to the west; China, Nepal, and Bhutan to the north-east; and Burma and Bangladesh to the east. In the Indian Ocean, India is in the vicinity of Sri Lanka and the Maldives; in addition, India's Andaman and Nicobar Islands share a maritime border with Thailand and Indonesia.Home to the ancient Indus Valley Civilisation and a region of historic trade routes and vast empires, the Indian subcontinent was identified with its commercial and cultural wealth for much of its long history. Four world religions—Hinduism, Buddhism, Jainism, and Sikhism—originated here, whereas Judaism, Zoroastrianism, Christianity, and Islam arrived in the 1st millennium CE and also helped shape the region's diverse culture. Gradually annexed by and brought under the administration of the British East India Company from the early 18th century and administered directly by the United Kingdom from the mid-19th century, India became an independent nation in 1947 after a struggle for independence that was marked by non-violent resistance led by Mahatma Gandhi   more
2 votes
0 comments
India - Voter Comments
No Comments
Vote & Comment
2

China, officially the People's Republic of China, is a sovereign state located in East Asia. It is the world's most populous country, with a population of over 1.35 billion. The PRC is a single-party state governed by the Communist Party, with its s... eat of government in the capital city of Beijing. It exercises jurisdiction over 22 provinces, five autonomous regions, four direct-controlled municipalities, and two mostly self-governing special administrative regions. The PRC also claims Taiwan – which is controlled by the Republic of China, a separate political entity – as its 23rd province, a claim which is controversial due to the complex political status of Taiwan.Covering approximately 9.6 million square kilometers, China is the world's second-largest country by land area, and either the third or fourth-largest by total area, depending on the method of measurement. China's landscape is vast and diverse, ranging from forest steppes and the Gobi and Taklamakan deserts in the arid north to subtropical forests in the wetter south. The Himalaya, Karakoram, Pamir and Tian Shan mountain ranges separate China from South and Central Asia. The Yangtze and Yellow Rivers, the third- and sixth-longest in the world, run from the Tibetan Plateau to the densely populated eastern seaboard. China's coastline along the Pacific Ocean is 14,500 kilometres long, and is bounded by the Bohai, Yellow, East and South China Seas   more
2 votes
0 comments
China - Voter Comments
No Comments
Vote & Comment
3

South Africa, officially the Republic of South Africa, is a country located at the southern tip of Africa. It has 2,798 kilometres of coastline that stretches along the South Atlantic and Indian oceans. To the north lie the neighbouring countries of...  Namibia, Botswana and Zimbabwe; to the east are Mozambique and Swaziland; and within it lies Lesotho, an enclave surrounded by South African territory. South Africa is the 25th-largest country in the world by land area, and with close to 53 million people, is the world's 24th-most populous nation.South Africa is a multiethnic society encompassing a wide variety of cultures, languages, and religions. Its pluralistic makeup is reflected in the constitution's recognition of 11 official languages, which is among the highest number of any country in the world. Two of these languages are of European origin: English and Afrikaans, the latter originating from Dutch and serving as the first language of most white and coloured South Africans. Though English is commonly used in public and commercial life, it is only the fourth most-spoken first language.About 80 percent of South Africans are of black African ancestry, divided among a variety of ethnic groups speaking different Bantu languages, nine of which have official status. The remaining population consists of Africa's largest communities of European, Asian, and multiracial ancestry. All ethnic and linguistic groups have political representation in the country's constitutional democracy, which comprises a parliamentary republic and nine provinces. Since the end of apartheid, South Africa's unique multicultural character has become integral to its national identity, as signified by the Rainbow Nation concept   more
0 votes
0 comments
South Africa - Voter Comments
No Comments
Vote & Comment
4

Brazil, officially the Federative Republic of Brazil, is the largest country in South America and Latin America. It is the world's fifth largest country, both by geographical area and population. It is the largest lusophone country in the world, and...  the only one in the Americas.Bounded by the Atlantic Ocean on the east, Brazil has a coastline of 7,491 km. It is bordered on the north by Venezuela, Guyana, Suriname and the French overseas region of French Guiana; on the northwest by Colombia; on the west by Bolivia and Peru; on the southwest by Argentina and Paraguay and on the south by Uruguay. Numerous archipelagos form part of Brazilian territory, such as Fernando de Noronha, Rocas Atoll, Saint Peter and Paul Rocks, and Trindade and Martim Vaz. It borders all other South American countries except Ecuador and Chile and occupies 47 percent of the continent of South America.Brazil was inhabited by numerous tribal nations prior to the landing of explorer Pedro Álvares Cabral in 1500, who claimed the area for Portugal. Brazil remained a Portuguese colony until 1808, when the capital of the Portuguese Empire was transferred from Lisbon to Rio de Janeiro after French forces led by Emperor Napoleon Bonaparte invaded Portugal. In 1815, it was elevated to the rank of kingdom upon the formation of the United Kingdom of Portugal, Brazil and the Algarves   more
0 votes
0 comments
Brazil - Voter Comments
No Comments
Vote & Comment
5

Russia or, officially known as the Russian Federation, is a country situated in northern Eurasia. It is a federal semi-presidential republic. From northwest to southeast, Russia shares land borders with Norway, Finland, Estonia, Latvia, Lithuania an... d Poland, Belarus, Ukraine, Georgia, Azerbaijan, Kazakhstan, China, Mongolia, and North Korea. It shares maritime borders with Japan by the Sea of Okhotsk, the U.S. state of Alaska across the Bering Strait and Canada's Arctic islands. At 17,075,400 square kilometres, Russia is the largest country in the world, covering more than one-eighth of the Earth's inhabited land area. Russia is also the world's ninth most populous nation with 143 million people as of 2012. Extending across the entirety of northern Asia and much of Eastern Europe, Russia spans nine time zones and incorporates a wide range of environments and landforms.The nation's history began with that of the East Slavs, who emerged as a recognizable group in Europe between the 3rd and 8th centuries AD. Founded and ruled by a Varangian warrior elite and their descendants, the medieval state of Rus arose in the 9th century. In 988 it adopted Orthodox Christianity from the Byzantine Empire, beginning the synthesis of Byzantine and Slavic cultures that defined Russian culture for the next millennium. Rus' ultimately disintegrated into a number of smaller states; most of the Rus' lands were overrun by the Mongol invasion and became tributaries of the nomadic Golden Horde. The Grand Duchy of Moscow gradually reunified the surrounding Russian principalities, achieved independence from the Golden Horde, and came to dominate the cultural and political legacy of Kievan Rus'. By the 18th century, the nation had greatly expanded through conquest, annexation, and exploration to become the Russian Empire, which was the third largest empire in history, stretching from Poland in Europe to Alaska in North America   more
0 votes
0 comments
Russia - Voter Comments
No Comments
Vote & Comment
Leave a comment...
(Maximum 900 words)