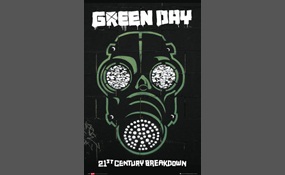 What is the best Green Day album? 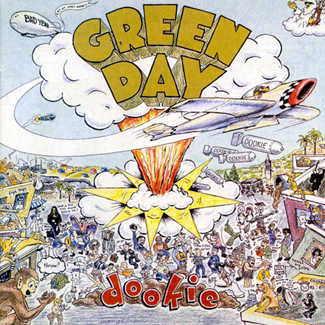 Dookie is the third studio album by American punk rock band Green Day, released on February 1, 1994, through Reprise Records. It was the band's first collaboration with producer Rob Cavallo and its major record label debut. Dookie became a worldwide commercial success, peaking at No. 2 on the US Billboard 200 and charting in seven countries. The album helped propel Green Day, and even punk rock music into mainstream popularity.Dookie produced five hit singles for the band: "Longview", "When I Come Around", "Basket Case", a re-recorded version of "Welcome to Paradise" and the radio-only single "She". The album has garnered considerable acclaim, from its release to present day, winning Grammy Award for Best Alternative Music Album in 1995 and being ranked No. 193 on Rolling Stone's list of The 500 Greatest Albums of All Time. As of 2013, Dookie is the band's best-selling album with more than 20 million copies sold worldwide. 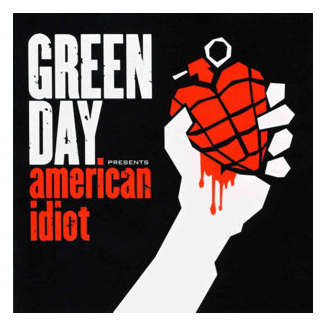 American Idiot is the seventh studio album by the American punk rock band Green Day. The album was produced by longtime collaborator Rob Cavallo. In mid-2003, the band began recording songs for an album titled Cigarettes and Valentines, but the master tracks were stolen, and the band decided to start recording a new album rather than re-record Cigarettes and Valentines.Green Day decided to produce a rock opera, inspired by the work of The Who and several musicals. The album follows the life of Jesus of Suburbia, a character with an "antihero" image created by Billie Joe Armstrong. Following early recording at Studio 880 in Oakland, California, the band finished the album at Ocean Way Recording in Hollywood.American Idiot was released by Reprise Records on September 20, 2004, in the United Kingdom and September 21, 2004, in the United States. The album achieved success worldwide, charting in 27 countries and peaking at number one in 19 of them, including the US and the UK. 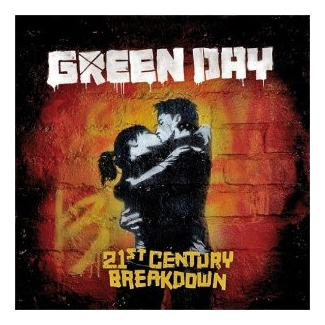 21st Century Breakdown is the eighth studio album by the American punk rock band Green Day. It is the band's second rock opera, following American Idiot, and their first album to be produced by Butch Vig. Green Day commenced work on the record in January 2006 and forty-five songs were written by vocalist/guitarist Billie Joe Armstrong by October 2007, but the band members did not enter studio work until January 2008.The album was released May 15, 2009 through Reprise Records. Armstrong has described the album as a "snapshot of the era in which we live as we question and try to make sense of the selfish manipulation going on around us, whether it be the government, religion, media or frankly any form of authority". The singles "Know Your Enemy" and "21 Guns" exemplify the themes of alienation and politically motivated anger present in the record.Critical response to 21st Century Breakdown was generally positive. The record achieved Green Day's best chart performance to date by reaching number one on the album charts of various countries, including the United States Billboard 200, the European Top 100 Albums, and the United Kingdom Albums Chart. It was awarded the Grammy Award for Best Rock Album at the 52nd Grammy Awards held on January 31, 2010. As of December 2010, 21st Century Breakdown has sold 1,005,000 copies in the United States and more than 4 million worldwide. 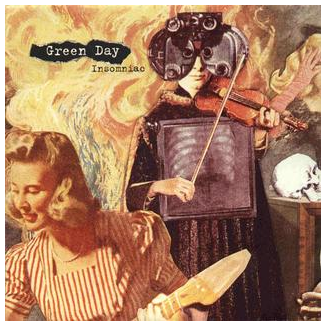 Insomniac is the fourth studio album by the American punk rock band Green Day. It was released on October 10, 1995 through Reprise Records. Though it peaked at number two in the United States and went double-platinum by 1996, Insomniac did not have the sales endurance of its predecessor, Dookie, largely due to its slightly darker lyrical tone and heavier, more abrasive sound. Insomniac is the band's third-best selling album behind Dookie and American Idiot with sales at over 10 million worldwide and 2,100,000 copies in the US alone. The album was reissued on vinyl on May 12, 2009. 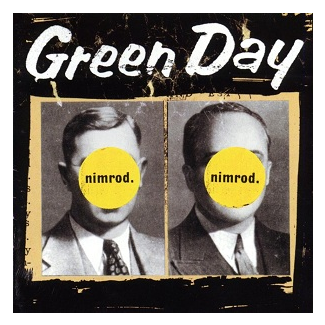 Nimrod is the fifth studio album by the American punk rock band Green Day, released on October 14, 1997 through Reprise Records. The group began work on the album in the wake of their cancellation of a European tour after the release of Insomniac. Recorded at Conway Studios in Los Angeles, the album was written with the intent of creating solid songs as opposed to a cohesive album. As a result, Nimrod is noted for its musical diversity and experimentation, and contains elements of folk, surf rock, and ska. The lyrical themes discussed on the record include maturity, personal reflection, and fatherhood. Nimrod is the band's first experimental album.The album peaked at number ten on the Billboard U.S. charts and was certified double platinum by the Recording Industry Association of America. The record also was certified triple platinum in Australia and double platinum in Canada. Nimrod also received generally positive reviews from critics, who praised Armstrong's songwriting on the record. The album yielded the acoustic hit "Good Riddance", which appeared at numerous pop culture events, including the series finale of the sitcom Seinfeld in 1998. 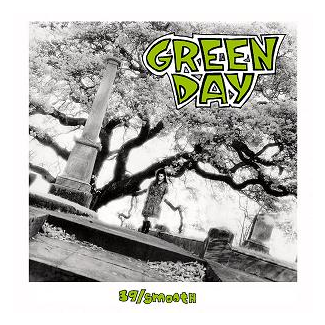 39/Smooth is the debut studio album by the American punk rock band Green Day. It was released on April 13, 1990 through Lookout! Records on vinyl and cassette. This is the band's only studio album to feature John Kiffmeyer on drums.Jesse Michaels of Operation Ivy contributed the artwork on the album. The inner sleeve shows handwritten lyrics by Billie Joe Armstrong and letters by drummer John Kiffmeyer and Lookout! Owner Larry Livermore to I.R.S. Records, rejecting an offer to sign to the label and declaring their loyalty to Lookout! Records.39/Smooth was later featured in its entirety, along with the group's two previous extended plays Slappy, 1,000 Hours and the song "I Want to Be Alone" on the compilation album 1,039/Smoothed Out Slappy Hours in 1991. 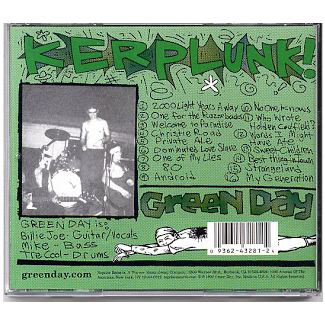 Kerplunk is the second studio album by the American punk rock band Green Day. It was released on January 17, 1992 through Lookout! Records. Kerplunk was their last release on an independent label and was also the first album to feature their current band lineup, with Tré Cool on drums. The album has gone on to be among the best selling independently released albums of all time. Major labels took notice of Kerplunk's phenomenal popularity and many approached the band. Green Day realized that they had outgrown their record distribution capacity with Lookout! And eventually signed with Reprise Records. With Reprise, Green Day recorded and released their next album Dookie.The album officially includes only 12 tracks, but the versions released on CD and cassette also include the 4 tracks from the Sweet Children EP. One of those tracks is a cover of The Who's "My Generation". The song "Welcome to Paradise" was re-recorded for Dookie.Like Dookie, Kerplunk was banned from certain stores because of the cover art. The cover features a mostly white picture of a high school girl with a gun that has been fired. On the back cover, there is a boy lying on the ground with a gunshot wound on his back. 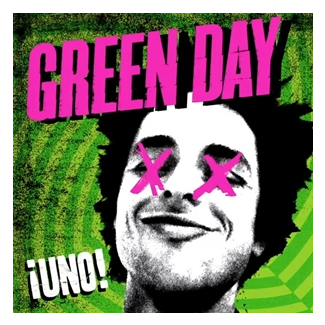 ¡Uno! Is the ninth studio album by American punk rock band Green Day, released on September 21, 2012, by Reprise Records. It is the first of three albums in the ¡Uno!, ¡Dos!, ¡Tré! Trilogy, a series of studio albums released from September 2012 to December 2012. Green Day recorded the album from February to June 2012 at Jingletown Studios in Oakland, California. It marked the first time that Jason White was an official member, making the band a quartet.Artwork of the album was revealed in a video uploaded to YouTube and the track list of the album, which consist of 12 songs was announced on June 26, 2012. The first single from the album, titled "Oh Love", was released on July 16, 2012. The second single "Kill the DJ" was released on European iTunes Stores on August 14, 2012. The third single "Let Yourself Go" was released on the US iTunes Store on September 5, 2012, and a promotional single "Nuclear Family" was released on their YouTube channel on September 12, 2012. A music video for "Stay the Night" was released on Rolling Stone and their YouTube channel on September 24, 2012.¡Uno! Received generally positive reviews from music critics. 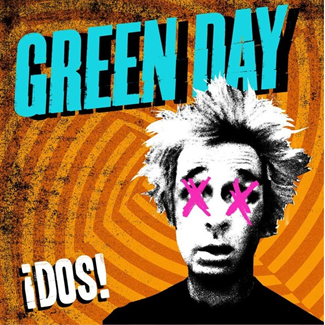 ¡Dos! Is the tenth studio album by the American punk rock band Green Day. The album was released on November 9, 2012 in Australia, November 12 in the United Kingdom and on November 13 in the United States through Reprise Records. It is the second installment in the ¡Uno! ¡Dos! ¡Tré! Trilogy. Following its predecessor's pop punk style, ¡Dos! Was billed as Green Day's take on garage rock.¡Dos! Received generally positive reviews from music critics, who praised its dynamic style and catchy songs, although others found its music dull and observed filler on the album. It debuted at number nine on the Billboard 200, with first-week sales of 69,000 copies in the United States. 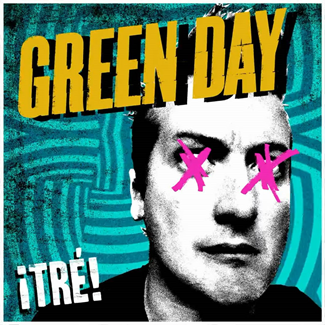