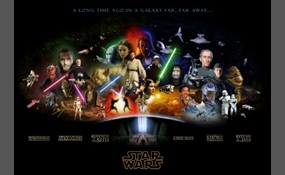 What is the best Star Wars movie?

Return of the Jedi, later released as Star Wars Episode VI: Return of the Jedi, is a 1983 American epic space opera film directed by Richard Marquand and written by George Lucas and Lawrence Kasdan, with Lucas as executive producer. It is the third ... film released in the Star Wars franchise and the first film to use THX technology. The film is set one year after The Empire Strikes Back and was produced by Howard Kazanjian and Lucasfilm Ltd.The evil Galactic Empire, under the direction of the ruthless Emperor Palpatine, is constructing a second Death Star in order to crush the Rebel Alliance. Since Palpatine plans to personally oversee the final stages of its construction, the Rebel Fleet launches a full-scale attack on the Death Star in order to prevent its completion and kill Palpatine, effectively bringing an end to the Empire once and for all. Meanwhile, Luke Skywalker, the Rebel leader and Jedi Apprentice, struggles to bring Darth Vader, who is his father Anakin and himself a fallen Jedi, back from the Dark Side of the Force.David Lynch and David Cronenberg were considered to direct the project before Marquand signed on as director. The production team relied on Lucas' storyboards during pre-production. While writing the shooting script, Lucas, Kasdan, Marquand, and producer Howard Kazanjian spent two weeks in conference discussing ideas to construct it. Kazanjian's schedule pushed shooting to a few weeks earlier to allow Industrial Light & Magic to work on the film's effects in post-production. Filming took place in England, California, and Arizona from January to March 1982, with Lucas handling second unit work. Strict secrecy surrounded the production and the film used the working title Blue Harvest to prevent price gouging   more
4 votes
0 comments
Star Wars Episode VI: Return of the Jedi - Voter Comments
No Comments
Vote & Comment
2

The Empire Strikes Back, later released as Star Wars Episode V: The Empire Strikes Back, is a 1980 American epic space opera film directed by Irvin Kershner, produced by Gary Kurtz, and written by Leigh Brackett and Lawrence Kasdan, with George Luca... s writing the film's story and serving as executive producer. Of the six main Star Wars films, it was the second to be released and the fifth in terms of internal chronology.The film is set three years after Star Wars. The Galactic Empire, under the leadership of the villainous Darth Vader, is in pursuit of Luke Skywalker and the rest of the Rebel Alliance. While Vader chases a small band of Luke's friends—Han Solo, Princess Leia Organa, and others—across the galaxy, Luke studies the Force under Jedi Master Yoda. But when Vader captures Luke's friends, Luke must decide whether to complete his training and become a full Jedi Knight or to confront Vader and save his comrades.Following a difficult production, The Empire Strikes Back was released on May 21, 1980, and initially received mixed reviews from critics, although it has since grown in esteem, becoming the most critically acclaimed chapter in the Star Wars saga and is considered one of the greatest films ever made. It became the highest-grossing film of 1980 and, to date, has earned more than $538 million worldwide from its original run and several re-releases. When adjusted for inflation, it is the 12th-highest-grossing film in North America   more
3 votes
0 comments
Star Wars Episode V: The Empire Strikes Back - Voter Comments
No Comments
Vote & Comment
3

Star Wars, later retitled Star Wars Episode IV: A New Hope, is a 1977 American epic space opera film written and directed by George Lucas. It is the first installment in the Star Wars series. The film stars Mark Hamill, Harrison Ford, Carrie Fisher,...  Peter Cushing and Sir Alec Guinness. In the film, a group of freedom fighters known as the Rebel Alliance plot to destroy the powerful Death Star space station, a devastating weapon created by the evil Galactic Empire. This conflict disrupts the isolated life of farmboy Luke Skywalker when he inadvertently acquires the droids carrying the stolen plans to the Death Star. After the Empire begins a cruel and destructive search for the droids, Skywalker decides to accompany Jedi Master Obi-Wan Kenobi on a daring mission to rescue the owner of the droids, rebel leader Princess Leia, and save the galaxy.Lucas began writing the script to Star Wars after completing his previous film American Graffiti and based the plot outline on Akira Kurosawa's The Hidden Fortress and the 40's Flash Gordon serials. Lucas approached Alan Ladd, Jr. After United Artists and Universal Pictures rejected his script and the project was planned to be financed and released through 20th Century Fox. During this time, the script underwent numerous changes and Lucas founded Industrial Light & Magic to create the visual effects for the film. Filming began on March 22, 1976, and was shot in various locations in Tunisia, England and Guatemala. During production, Lucas and the crew encountered numerous problems such as weather problems, malfunctioning equipment, as well as budgetary concerns. Eventually, Lucas, along with producer Gary Kurtz and production supervisor Robert Watts, split the crew into three units to meet the studio's deadlines. During post production, sound designer Ben Burtt used various animal roars, cables and other sound effects to create an "organic soundtrack" and composer John Williams used leitmotifs in his score at Lucas' requests   more
2 votes
0 comments
Star Wars Episode IV: A New Hope - Voter Comments
No Comments
Vote & Comment
4

(32 Years Before Episode IV) Stranded on the desert planet Tatooine after rescuing young Queen Amidala from the impending invasion of Naboo, Jedi apprentice Obi-Wan Kenobi and his Jedi Master discover nine-year-old Anakin Skywalker, a young slave un... usually strong in the Force. Anakin wins a thrilling Podrace and with it his freedom as he leaves his home to be trained as a Jedi. The heroes return to Naboo where Anakin and the Queen face massive invasion forces while the two Jedi contend with a deadly foe named Darth Maul. Only then do they realize the invasion is merely the first step in a sinister scheme by the re-emergent forces of darkness known as the Sith   more
1 vote
0 comments
Star Wars Episode I: The Phantom Menace - Voter Comments
No Comments
Vote & Comment
5

(22 Years Before Episode IV) Ten years after the events of the Battle of Naboo, not only has the galaxy undergone significant change, but so have Obi-Wan Kenobi, Padmé Amidala, and Anakin Skywalker as they are thrown together again for the first tim... e since the Trade Federation invasion of Naboo. Anakin has grown into the accomplished Jedi apprentice of Obi-Wan, who himself has transitioned from student to teacher. The two Jedi are assigned to protect Padmé whose life is threatened by a faction of political separatists. As relationships form and powerful forces collide, these heroes face choices that will impact not only their own fates, but the destiny of the Republic   more
1 vote
0 comments
Star Wars Episode II: Attack of the Clones - Voter Comments
No Comments
Vote & Comment
6

(19 Years before Episode IV) Three years after the onset of the Clone Wars, the noble Jedi Knights have been leading a massive clone army into a galaxy-wide battle against the Separatists. When the sinister Sith unveil a thousand-year-old plot to ru... le the galaxy, the Republic crumbles and from its ashes rises the evil Galactic Empire. Jedi hero Anakin Skywalker is seduced by the dark side of the Force to become the Emperor's new apprentice - Darth Vader. The Jedi are decimated, as Obi-Wan Kenobi and Jedi Master Yoda are forced into hiding. The only hope for the galaxy are Anakin's own offspring - the twin children born in secrecy who will grow up to become Luke Skywalker and Princess Leia Organa   more
1 vote
0 comments
Star Wars Episode III: Revenge of the Sith - Voter Comments
No Comments
Vote & Comment
7

I hate all of them

Then why are you on this poll?!?
1 vote
0 comments
I hate all of them - Voter Comments
No Comments
Vote & Comment
8

I love all of them!