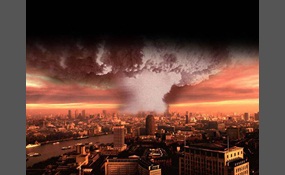 What is the biggest threat to the world?

Communism is a socioeconomic system structured upon common ownership of the means of production and characterized by the absence of social classes, money, and the state; as well as a social, political and economic ideology and movement that aims to ... establish this social order. The movement to develop communism, in its Marxist–Leninist interpretations, significantly influenced the history of the 20th century, which saw intense rivalry between the states which claimed to follow this ideology and their enemies.Communism is most associated with Marxism, which considers itself the embodiment of scientific socialism. According to Marxism, capitalism is a historically necessary stage of society, which has led to the concentration of social classes into two major groups: proletariat - who must work to survive, and who make up a majority of society - and bourgeoisie - a minority who derive profit from employing the proletariat, through private ownership of the means of production. The political, social, and economic conflict between both groups, each attempting to push their interests to their logical extreme, will lead into the capture of political power by the proletariat   more
7 votes
4 comments
Communism - Voter Comments

Sunni Islam is the largest branch of Islam; its adherents are referred to in Arabic as ahl as-sunnah wa l-jamāʻah, "people of the tradition of Muhammad and the consensus of the Ummah" or ahl as-sunnah for short. In English, its theological study or ... doctrine is called Sunnism, while adherents are known as Sunni Muslims, Sunnis, and Sunnites. Sunni Islam is the world's second largest religious body and the largest religious denomination for any religion in the world. Sunni Islam is sometimes referred to as the orthodox version of the religion. The word "Sunni" is believed to come from the term Sunnah, which refers to the sayings and actions of the Islamic prophet Muhammad as recorded in hadiths.The primary collections consisting of Kutub al-Sittah accepted by Sunni orthodoxy, in conjunction with the Quran and binding consensus, form the basis of all jurisprudence within Sunni Islam. Laws are derived from these basic sources; in addition, Sunni Islam's juristic schools recognize differing methods to derive verdicts such as analogical reason, consideration of public welfare, and juristic discretion   more
4 votes
0 comments
Sunni Islam - Voter Comments
No Comments
Vote & Comment
4

Social inequality occurs when resources in a given society are distributed unevenly, typically through norms of allocation, that engender specific patterns along lines of socially-defined categories of persons. Economic inequality, usually described...  on the basis of the unequal distribution of income or wealth, is a frequently studied type of social inequality. Though the disciplines of economics and sociology generally use different theoretical approaches to examine and explain economic inequality, both fields are actively involved in researching this inequality. However, social and natural resources other than purely economic resources are also unevenly distributed in most societies and may contribute to social status. Norms of allocation can also affect the distribution of rights and privileges, social power, access to public goods such as education or the judicial system, adequate housing, transportation, credit and financial services such as banking and other social goods and services   more
3 votes
1 comment
Social inequality - Voter Comments

Russia, also officially known as the Russian Federation, is a country in northern Eurasia. It is a federal semi-presidential republic. From northwest to southeast, Russia shares land borders with Norway, Finland, Estonia, Latvia, Lithuania and Polan... d, Belarus, Ukraine, Georgia, Azerbaijan, Kazakhstan, China, Mongolia, and North Korea. It shares maritime borders with Japan by the Sea of Okhotsk and the US state of Alaska across the Bering Strait. At 17,075,400 square kilometres, Russia is the largest country in the world, covering more than one-eighth of the Earth's inhabited land area. Russia is also the world's ninth most populous nation with 143 million people as of 2012. Extending across the entirety of northern Asia and much of Eastern Europe, Russia spans nine time zones and incorporates a wide range of environments and landforms.The nation's history began with that of the East Slavs, who emerged as a recognizable group in Europe between the 3rd and 8th centuries AD. Founded and ruled by a Varangian warrior elite and their descendants, the medieval state of Rus arose in the 9th century   more
2 votes
1 comment
Russia - Voter Comments

Iran, also known as Persia, officially the Islamic Republic of Iran, is a country in Western Asia. It is bordered to the northwest by Armenia and Azerbaijan, with Kazakhstan and Russia across the Caspian Sea; to the northeast by Turkmenistan; to the...  east by Afghanistan and Pakistan; to the south by the Persian Gulf and the Gulf of Oman; and to the west by Turkey and Iraq. Comprising a land area of 1,648,195 km², it is the second-largest nation in the Middle East and the 18th-largest in the world; with 78.4 million inhabitants, Iran is the world's 17th most populous nation. It is the only country that has both a Caspian Sea and Indian Ocean coastline. Iran has been of geostrategic importance because of its central location in Eurasia and Western Asia and the Strait of Hormuz.Iran is home to one of the world's oldest civilizations, beginning with the formation of the Proto-Elamite and Elamite kingdom in 3200–2800 BCE. The Iranian Medes unified the country into the first of many empires in 625 BCE, after which it became the dominant cultural and political power in the region   more
1 vote
0 comments
Iran - Voter Comments
No Comments
Vote & Comment
7

The Shia, or the Shiites, represent the second largest denomination of Islam. Adherents of Shia Islam are called Shias or the Shi'a as a collective or Shi'i individually. Shi'a is the short form of the historic phrase Shīʻatu ʻAlī meaning "followers... ", "faction" or "party" of Muhammad's son-in-law and cousin Ali, whom the Shia believe to be Muhammad's successor in the Caliphate. Twelver Shia is the largest branch of Shia Islam, and the term Shia Muslim is often taken to refer to Twelvers by default. Shia Muslims constitute 10-13% of the world's Muslim population and 11-14% of the Middle East's entire population.Shi'i Islam is based on the Quran and the message of the Islamic prophet Muhammad attested in hadith recorded by the Shia, and certain books deemed sacred to the Shia. Shia consider Ali to have been divinely appointed as the successor to Muhammad, and as the first Imam   more
1 vote
1 comment
Shia Islam - Voter Comments

Neo-Nazism consists of post-World War II social or political movements seeking to revive the far-right-wing tenets of Nazism. The term neo-Nazism can also refer to the ideology of these movements.Neo-Nazism borrows elements from Nazi doctrine, inclu... ding militant nationalism, racism, xenophobia, homophobia, antisemitism, and initiating the Fourth Reich. Holocaust denial is a common feature, as is incorporation of Nazi symbols and admiration of Adolf Hitler.Neo-Nazi activity is a global phenomenon, with organized representation in many countries, as well as international networks. In some European and Latin American countries, laws have been enacted that prohibit the expression of pro-Nazi, racist, anti-Semitic or homophobic views. Many Nazi-related symbols are banned in European countries in an effort to curtail neo-Nazism   more
0 votes
0 comments
Neo-Nazism - Voter Comments
No Comments
Vote & Comment
9

China, officially the People's Republic of China, is a sovereign state located in East Asia. It is the world's most populous country, with a population of over 1.35 billion. The PRC is a single-party state governed by the Communist Party, with its s... eat of government in the capital city of Beijing. It exercises jurisdiction over 22 provinces, five autonomous regions, four direct-controlled municipalities, and two mostly self-governing special administrative regions. The PRC also claims the territories governed by the Republic of China, a separate political entity commonly known as Taiwan today, as a part of its territory, which includes the island of Taiwan as Taiwan Province, Kinmen and Matsu as a part of Fujian Province and islands the ROC controls in the South China Sea as a part of Hainan Province, a claim which is controversial due to the complex political status of Taiwan.Covering approximately 9.6 million square kilometers, China is the world's second-largest country by land area, and either the third or fourth-largest by total area, depending on the method of measurement   more
0 votes
0 comments
China - Voter Comments
No Comments
Vote & Comment
10

Turkey, officially the Republic of Turkey, is a contiguous transcontinental parliamentary republic largely located in Western Asia with the smaller portion of Eastern Thrace in Southeastern Europe. Turkey is bordered by eight countries: Bulgaria to ... the northwest; Greece to the west; Georgia to the northeast; Armenia, Iran and the Azerbaijani exclave of Nakhchivan to the east; and Iraq and Syria to the southeast. The Mediterranean Sea is to the south; the Aegean Sea to the west; and the Black Sea to the north. The Sea of Marmara, the Bosphorus and the Dardanelles demarcate the boundary between Thrace and Anatolia; they also separate Europe and Asia. Turkey's location at the crossroads of Europe and Asia makes it a country of significant geostrategic importance.Turkey has been inhabited since the paleolithic age, including various Ancient Anatolian civilizations, Aeolian and Ionian Greeks, Thracians, and Persians. After Alexander the Great's conquest, the area was Hellenized, which continued with the Roman rule and the transition into the Byzantine Empire   more
0 votes
0 comments
Turkey - Voter Comments
No Comments
Vote & Comment
11

North Korea, officially the Democratic People's Republic of Korea, is a country in East Asia, in the northern part of the Korean Peninsula. The name Korea is derived from Goryeo, a name used by ancient and medieval kingdoms. The capital and largest ... city is Pyongyang. North Korea shares a land border with China to the north and north-west, along the Amnok and Tumen rivers. A small section of the Tumen River also forms North Korea's short border with Russia to the northeast. The Korean Demilitarized Zone marks the boundary between North Korea and South Korea. The legitimacy of this border is not accepted by either side, as both states claim to be the legitimate government of the entire peninsula.Korea was annexed by the Empire of Japan in 1910. In 1945, when Japan was defeated in World War II, Korea was divided into two occupied zones, with the north occupied by the Soviet Union and the south by the United States. Negotiations on unification failed, and in 1948 two separate governments were formed: the Democratic People's Republic of Korea in the north, and the Republic of Korea in the south. The conflicting claims of sovereignty led to the Korean War in 1950   more
0 votes
0 comments
North Korea - Voter Comments
No Comments
Vote & Comment
Leave a comment...
(Maximum 900 words)

VladimirLeninIsCool says2015-04-19T17:17:26.7283501-05:00
Report Post
To comment on what CannedBread said, Countries like the USSR and North Korea CALLED themselves Communist, but were just Authoritarian with some Communist Ideas.

VladimirLeninIsCool says2015-04-19T19:07:45.6255210-05:00
Report Post
There were still classes in the USSR, but simply government-controlled ones: the Poor and the "Communists." The post-Lenin era USSR was a society built on a twisted remake of Lenin's already extreme communism. By the late Soviet era, a non-Communist Oligarchy had already taken over. Most educated people who have studied this subject believe the USSR was only "truly" communist under Vladimir Lenin.

Heraclitus says2015-04-20T04:42:14.8766901-05:00
Report Post
Communism is impossible to obtain. The closest the world has got were the USSR, Noth Korea and China under Mao. They were still extremely collectivist and proof that Communism is a failed experiment.