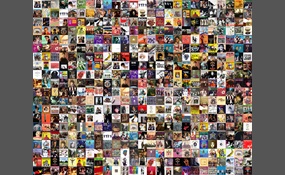 What Is The Greatest Album of All Time.

Battle Born is the fourth studio album by American rock band The Killers, released on September 17, 2012 on Vertigo Records in the UK and the following day on Island Records in the US. The phrase "Battle Born" appears on the state flag of Nevada and...  is the name of the recording studio owned by the band, where the majority of the album was recorded.Recorded following an extended hiatus, the band worked with five producers during the recording of the album: Steve Lillywhite, Damian Taylor, Brendan O'Brien, Stuart Price, and Daniel Lanois   more
4 votes
1 comment
Battle Born - Voter Comments

The Joshua Tree is the fifth studio album by rock band U2. It was produced by Daniel Lanois and Brian Eno, and was released on 9 March 1987 on Island Records. In contrast to the ambient experimentation of their 1984 release The Unforgettable Fire, t... he band aimed for a harder-hitting sound within the limitation of conventional song structures on The Joshua Tree. The album is influenced by American and Irish roots music, and depicts the band's love–hate relationship with the United States, with socially and politically conscious lyrics embellished with spiritual imagery.Inspired by American tour experiences, literature, and politics, U2 chose America as a theme for the record. Recording began in January 1986 in Ireland, and to foster a relaxed, creative atmosphere, the group recorded in two houses, in addition to two professional studios. Several events during the sessions helped shape the conscious tone of the album, including the band's participation in A Conspiracy of Hope tour, the death of roadie Greg Carroll, and lead vocalist Bono's travels to Central America. Recording was completed in November 1986; additional production continued into January 1987   more
3 votes
2 comments
The Joshua Tree - Voter Comments

Dark Side of the Moon

Tha Carter IV is the ninth studio album by American rapper Lil Wayne, released on August 29, 2011 through Young Money Entertainment, Cash Money Records and Universal Republic Records. Recording sessions for the album began in late 2008, shortly afte... r Lil Wayne's sixth studio album, Tha Carter III was released to strong sales and critical acclaim: however, the sessions were put on hold, as Lil Wayne claimed he did not want to follow an album he held in high regard so quickly with another, potentially inferior release. In the interim, Lil Wayne released two other solo albums: the largely rock-themed Rebirth and I Am Not a Human Being. The latter was reportedly composed from unreleased material from the original Tha Carter IV sessions, as the album was released whilst Wayne served a prison sentence at Rikers Island prison for illegal possession of a weapon, and was thus unable to record any new material: this also meant Tha Carter IV's recording sessions were once more put on hold.Following Wayne's release from prison, the album was re-recorded from scratch. The recording sessions resumed at various locations, involving several record producers including Bangladesh, Detail, T-Minus, Noah "40" Shebib, Polow da Don, Jim Jonsin, Kane Beatz, Boi-1da, Willy Will, StreetRunner, Cool & Dre, Young Ladd, The Smeezingtons, and Kanye West. The album's largely concerns the themes of sex, violence, drugs and crime, but also love, hurt and emotional conflict. Appearances on the album include Cory Gunz, Drake, T-Pain, Tech N9ne, Andre 3000, Rick Ross, John Legend, Bruno Mars, Birdman, Kevin Rudolf, Jadakiss, Bun B, Nas, Shyne, and Busta Rhymes   more
1 vote
0 comments
Tha Carter IV - Voter Comments
No Comments
Vote & Comment
11

Halfway Between the Gutter and the Stars

Ghosts in the Code

Reflections of a Dream

Wish you were here