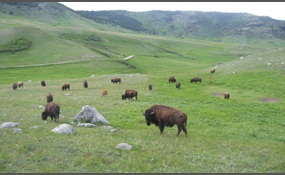 What is the most empty (No/little Population) state in the USA?

Wyoming is a state in the mountain region of the Western United States. Wyoming is the 10th most extensive, but the least populous and the second least densely populated of the 50 United States. The western two thirds of the state is covered mostly ... with the mountain ranges and rangelands in the foothills of the Eastern Rocky Mountains, while the eastern third of the state is high elevation prairie known as the High Plains. Cheyenne is the capital and the most populous city in Wyoming, with a population of 91,738 in the metropolitan area   more
6 votes
1 comment
Wyoming - Voter Comments

North Dakota is the 39th state of the United States, having been admitted to the union on November 2, 1889.It is located in the Upper Midwestern region of the United States, bordered by the Canadian provinces of Saskatchewan and Manitoba to the nort... h, the states of Minnesota to the east, South Dakota to the south, and Montana to the west. The state capitol is located in Bismarck and the largest city is Fargo. Currently, North Dakota is the 19th most extensive but the 3rd least populous and the 4th least densely populated of the 50 United States.The primary public universities are located in Grand Forks and Fargo. The U.S. Air Force operates air bases near Minot and Grand Forks.North Dakota has weathered the Great Recession with a boom in natural resources, particularly a boom in oil extraction from the Bakken formation, which lies beneath the western part of the state. The development has driven strong job and population growth, and low unemployment   more
1 vote
0 comments
North Dakota - Voter Comments
No Comments
Vote & Comment
3

Kansas KAN-zəs is a U.S. state located in the Midwestern United States. It is named after the Kansa Native American tribe which inhabited the area. The tribe's name is often said to mean "people of the wind" or "people of the south wind," although t... his was probably not the term's original meaning. Residents of Kansas are called "Kansans." For thousands of years, what is now Kansas was home to numerous and diverse Native American tribes. Tribes in the Eastern part of the state generally lived in villages along the river valleys. Tribes in the Western part of the state were semi-nomadic and hunted large herds of bison. Kansas was first settled by European Americans in the 1830s, but the pace of settlement accelerated in the 1850s, in the midst of political wars over the slavery issue.When it was officially opened to settlement by the U.S. government in 1854, abolitionist Free-Staters from New England and pro-slavery settlers from neighboring Missouri rushed to the territory to determine whether Kansas would become a free state or a slave state. Thus, the area was a hotbed of violence and chaos in its early days as these forces collided, and was known as Bleeding Kansas   more
1 vote
0 comments
Kansas - Voter Comments
No Comments
Vote & Comment
4

Nebraska is a state that lies in both the Great Plains and the Midwestern United States. Its state capital is Lincoln. Its largest city is Omaha, which is on the Missouri River.The state is crossed by many historic trails, but it was the California ... Gold Rush that first brought large numbers of non-indigenous settlers to the area. Nebraska became a state in 1867.There are wide variations between winter and summer temperatures, and violent thunderstorms and tornadoes are common. The state is characterized by treeless prairie, ideal for cattle-grazing, and it is a major producer of beef, as well as pork, corn, and soybeans.Ethnically, the largest group of Nebraskans are German American. The state also has the largest per capita population of Czech Americans among U.S. states   more
0 votes
0 comments
Nebraska - Voter Comments
No Comments
Vote & Comment
5

South Dakota is a state located in the Midwestern region of the United States. It is named after the Lakota and Dakota Sioux Native American tribes. South Dakota is the 17th most extensive, but the 5th least populous and the 5th least densely popula... ted of the 50 United States. Once the southern portion of the Dakota Territory, South Dakota became a state on November 2, 1889, simultaneously with North Dakota. Pierre is the state capital and Sioux Falls, with a population of about 159,000, is South Dakota's largest city.South Dakota is bordered by the states of North Dakota, Minnesota, Iowa, Nebraska, Wyoming, and Montana. The state is bisected by the Missouri River, dividing South Dakota into two geographically and socially distinct halves, known to residents as "East River" and "West River". Eastern South Dakota is home to most of the state's population, and fertile soil in this area is used to grow a variety of crops. West of the Missouri, ranching is the predominant agricultural activity, and the economy is more dependent on tourism and defense spending. The Black Hills, a group of low pine-covered mountains, are located in the southwest part of the state   more
0 votes
0 comments
South Dakota - Voter Comments
No Comments
Vote & Comment
6

Washington is a state in the Pacific Northwest region of the United States located north of Oregon, west of Idaho, and south of the Canadian province of British Columbia on the coast of the Pacific Ocean. Named after George Washington, the first Pre... sident of the United States, the state was made out of the western part of the Washington Territory which had been ceded by Britain in 1846 by the Oregon Treaty as a settlement of the Oregon Boundary Dispute. It was admitted to the Union as the 42nd state in 1889.Washington is the 18th most extensive and the 13th most populous of the 50 United States. Approximately 60 percent of Washington's residents live in the Seattle metropolitan area, the center of transportation, business, and industry along the Puget Sound region of the Salish Sea, an inlet of the Pacific consisting of numerous islands, deep fjords, and bays carved out by glaciers. The remainder of the state consists of deep temperate rainforests in the west, mountain ranges in the west, central, northeast and far southeast, and a semi-arid basin region in the east, central, and south, given over to intensive agriculture   more
0 votes
0 comments
Washington - Voter Comments
No Comments
Vote & Comment
7

Wisconsin is a U.S. state located in the north-central United States, in the Midwest and Great Lakes regions. It is bordered by Minnesota to the west, Iowa to the southwest, Illinois to the south, Lake Michigan to the east, Michigan to the northeast... , and Lake Superior to the north. Wisconsin is the 23rd state by total area and the 20th most populous. The state capital is Madison, and its largest city is Milwaukee, which is located on the western shore of Lake Michigan. The state comprises 72 counties.Wisconsin's geography is diverse, with the Northern Highland and Western Upland along with a part of the Central Plain occupying the western part of the state and lowlands stretching to the shore of Lake Michigan. Wisconsin is second to Michigan in the length of its Great Lakes coastline.Wisconsin is known as "America's Dairyland" because it is one of the nation's leading dairy producers, particularly famous for cheese. Manufacturing and tourism are also major contributors to the state's economy   more
0 votes
0 comments
Wisconsin - Voter Comments
No Comments
Vote & Comment
Leave a comment...
(Maximum 900 words)