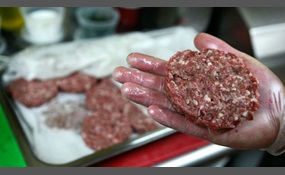 What is the most exotic animal, you've ever eaten

Venison is the meat of a game animal, especially a deer.
2 votes
0 comments
Deer - Voter Comments
No Comments
Vote & Comment
6

The lion is one of the five big cats in the genus Panthera and a member of the family Felidae. With some males exceeding 250 kg in weight, it is the second-largest living cat after the tiger. Wild lions currently exist in sub-Saharan Africa and in A... sia while other types of lions have disappeared from North Africa and Southwest Asia in historic times. Until the late Pleistocene, about 10,000 years ago, the lion was the most widespread large land mammal after humans. They were found in most of Africa, across Eurasia from western Europe to India, and in the Americas from the Yukon to Peru. The lion is a vulnerable species, having seen a major population decline in its African range of 30–50% per two decades during the second half of the 20th century. Lion populations are untenable outside designated reserves and national parks. Although the cause of the decline is not fully understood, habitat loss and conflicts with humans are currently the greatest causes of concern. Within Africa, the West African lion population is particularly endangered.Lions live for 10–14 years in the wild, while in captivity they can live longer than 20 years   more
1 vote
0 comments
Lion - Voter Comments
No Comments
Vote & Comment
9

Campylobacter jejuni is a species of bacteria commonly found in animal feces. It is curved, helical-shaped, non-spore forming, Gram-negative, and microaerophilic. C. Jejuni is one of the most common causes of human gastroenteritis in the world. Food...  poisoning caused by Campylobacter species can be severely debilitating, but is rarely life-threatening. It has been linked with subsequent development of Guillain-Barré syndrome, which usually develops two to three weeks after the initial illness   more
0 votes
0 comments
Campylobacter jejuni - Voter Comments
No Comments
Vote & Comment
14

Semen, also known as seminal fluid, is an organic fluid that may contain spermatozoa. It is secreted by the gonads and other sexual organs of male or hermaphroditic animals and can fertilize female ova. In humans, seminal fluid contains several comp... onents besides spermatozoa: proteolytic and other enzymes as well as fructose are elements of seminal fluid which promote the survival of spermatozoa, and provide a medium through which they can move or "swim".Semen is produced and originates from the seminal vesicle, which is located in the pelvis. The process that results in the discharge of semen is called ejaculation   more
0 votes
0 comments
Semen - Voter Comments
No Comments
Vote & Comment
Leave a comment...
(Maximum 900 words)