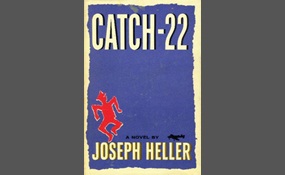 What Is The Ultimate Catch-22?

A Catch-22 is a goverment regulation or situation that is inescapable.

A mobile phone is a phone that can make and receive telephone calls over a radio link while moving around a wide geographic area. It does so by connecting to a cellular network provided by a mobile phone operator, allowing access to the public telep... hone network. By contrast, a cordless telephone is used only within the short range of a single, private base station.In addition to telephony, modern mobile phones also support a wide variety of other services such as text messaging, MMS, email, Internet access, short-range wireless communications, business applications, gaming and photography. Mobile phones that offer these and more general computing capabilities are referred to as smartphones.The first hand-held cell phone was demonstrated by John F. Mitchell and Dr Martin Cooper of Motorola in 1973, using a handset weighing around 2.2 pounds. In 1983, the DynaTAC 8000x was the first to be commercially available. From 1990 to 2011, worldwide mobile phone subscriptions grew from 12.4 million to over 6 billion, penetrating about 87% of the global population and reaching the bottom of the economic pyramid   more
1 vote
0 comments
Mobile phone - Voter Comments
No Comments
Vote & Comment
2

Insurance is the equitable transfer of the risk of a loss, from one entity to another in exchange for payment. It is a form of risk management primarily used to hedge against the risk of a contingent, uncertain loss.According to study texts of The C... hartered Insurance Institute, there are the following categories of risk:Financial risks which means that the risk must have financial measurement.Pure risks which means that the risk must be real and not related to gamblingParticular risks which means that these risks are not widespread in their effect, for example such as earthquake risk for the region prone to it.It is commonly accepted that only financial, pure and particular risks are insurable.An insurer, or insurance carrier, is a company selling the insurance; the insured, or policyholder, is the person or entity buying the insurance policy. The amount of money to be charged for a certain amount of insurance coverage is called the premium. Risk management, the practice of appraising and controlling risk, has evolved as a discrete field of study and practice.The transaction involves the insured assuming a guaranteed and known relatively small loss in the form of payment to the insurer in exchange for the insurer's promise to compensate the insured in the case of a financial loss. The insured receives a contract, called the insurance policy, which details the conditions and circumstances under which the insured will be financially compensated   more
0 votes
0 comments
Insurance - Voter Comments
No Comments
Vote & Comment
Leave a comment...
(Maximum 900 words)