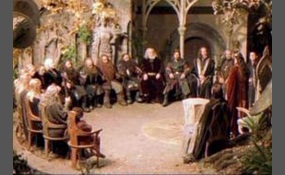 What Is you Favourite Middle-Earthian Race?

Meaning the main races of Middle-Earth. Comments explaining why are strongly encouraged.

The first of the speaking peoples of Middle-Earth, therefore calling themselves 'Quendi'. Cannot die except by unnatural means (=getting killed), which means that they get really old. Strongly bound to nature and renowned for their beauty, general m... agical abilities, etc.. When they die, their souls journey to Valinor   more
9 votes
4 comments
Elves - Voter Comments

The people of the mountains, calling themselves the 'Naugrim'. Usually short and stocky, with great beards. Renowned for skill in working metal, stone, and other materials of the earth. Created by Aule before even the Elves existed, but only receive... d a soul (and thus, sentience) from Eru Ilúvatar after the Elves had appeared. Their lives can last several centuries. After death, they return to stone, which is what they were made of   more
4 votes
2 comments
Dwarves - Voter Comments

I'm sure most of you know those. Eru Ilúvatar's favourites, which is why he granted them the 'Gift of Men', which is Death. Their lives therefore are limited, and after Death, humans leave Middle-Earth forever, which makes them the only race who is ... not forever a part of Middle-Earth. This originally good thing eventually became the greatest fear of men, mainly through corruption by the Dark Lord   more
3 votes
1 comment
Humans - Voter Comments

Also known as Halflings. Usually shorter even than Dwarves, a very comfortable, unhurried people. Their origins are unclear. They mainly inhabit a small area called the Shire in the North-West of Middle-Earth, as well as some surrounding areas, and ... have a passion for eating, sleeping, and smoking something they call 'pipe-weed' (no, not Marijuana, as far as I know, though it is referred to several times simply as 'weed'). Their lifespan slightly exceeds that of humans, usually reaching around one hundred years   more
2 votes
0 comments
Hobbits - Voter Comments
No Comments
Vote & Comment
5

The shepherds of the trees. Large, tree-like creatures, of great strength, that can tear stone walls apart. They are very slow, think long and hard on every decision, and use a melodious, slow, and very flowing language none other in Middle-Earth sp... eak   more
2 votes
0 comments
Ents - Voter Comments
No Comments
Vote & Comment
6

The creatures of the Dark Lord, created from Elves. His servants, core of all his armies. Fear the sun, which is why Mordor is constantly under a roof of smoke spewed from Orodruin (a.K.A Mount Doom, Amon Amarth).
1 vote
1 comment
Orcs - Voter Comments