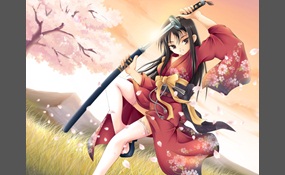 What is your favorite anime series?

You can add series if you want. I would like people to comment on which shows they have seen (if any).

BLEACH follows the story of Ichigo Kurosaki. For as long as he can remember, Ichigo Kurosaki has been able to see ghosts. But when he meets Rukia, a Soul Reaper who battles evil spirits known as Hollows, he finds his life is changed forever.
3 votes
0 comments
Bleach - Voter Comments
No Comments
Vote & Comment
3

Code Geass: Lelouch of the Rebellion, often referred to as simply Code Geass, is a Japanese anime series created by Sunrise, directed by Gorō Taniguchi, and written by Ichirō Ōkouchi, with original character designs by manga authors Clamp. Set in an...  alternate timeline, the series focuses on how the former prince Lelouch vi Britannia obtains a power known as Geass and decides to use it to obliterate the Holy Britannian Empire, an imperial monarchy and a superpower that has been conquering various countries. Code Geass first ran in Japan on Mainichi Broadcasting System from October 5, 2006, to July 28, 2007. Its sequel series, Code Geass: Lelouch of the Rebellion R2, ran on MBS and Tokyo Broadcasting System from April 6, 2008 to September 28, 2008. The series has also been adapted into various manga and light novels with the former showing various alternate scenarios from the TV series. Bandai Entertainment also licensed most parts from the franchise for English release in December 2007, airing the two TV series on Cartoon Network. Most manga and light novels have also been published in North America by Bandai   more
2 votes
0 comments
Code Geass - Voter Comments
No Comments
Vote & Comment
7

InuYasha, also known as InuYasha: Feudal Fairy Tale, is a Japanese manga series written and illustrated by Rumiko Takahashi. It premiered in Weekly Shōnen Sunday on November 13, 1996 and concluded on June 18, 2008, with the chapters collected into 5... 6 tankōbon volumes by Shogakukan. The series follows the half demon InuYasha and a 15-year-old girl from Tokyo, Kagome Higurashi, who is transported to the Sengoku period after falling into a well in her family shrine, where she meets InuYasha. When a monster from that era tries to take the magical Jewel of Four Souls embodied in Kagome, she accidentally shatters the Jewel into many pieces that are dispersed across Japan. InuYasha and Kagome start traveling to recover it before the powerful demon Naraku finds all the shards. InuYasha and Kagome gain several allies during their journey namely Shippo, Miroku, and Sango. In contrast to the typically comedic nature of many of Takahashi's previous work, InuYasha deals with darker subject matter, using the setting of the Sengoku period to easily display the violent content. It was adapted into two anime television series produced by Sunrise. The first was broadcast for 167 episodes on Yomiuri TV in Japan from October 16, 2000 until September 13, 2004. The second series, called InuYasha: The Final Act, began airing four years later on October 3, 2009 to cover the rest of the manga series and ended on March 29, 2010 after 26 episodes. Four feature films and five original video animations have also been released. Other merchandise include video games and a light novel. Viz Media licensed the manga, the two anime series, and movies for North America   more
2 votes
1 comment
InuYasha - Voter Comments

Deadman Wonderland is a manga series written by Jinsei Kataoka and illustrated by Kazuma Kondou, who also wrote and illustrated the Eureka Seven manga, and published in Shōnen Ace since 2007. Tokyopop acquired the licensing rights to distribute the ... manga in English and released the first 5 volumes of the manga before the company shut down its North American Publishing division in 2011. On July 7, 2013 Viz Media announced that they licensed the series for English language release in North America and will release the first volume on February 11, 2014, with new volumes releasing every two months. An anime adaptation aired between April and July 2011, pulling content from the first 21 chapters of the manga. The anime is licensed by Funimation Entertainment and aired on Adult Swim's newly revived Toonami block   more
1 vote
0 comments
Deadman Wonderland - Voter Comments
No Comments
Vote & Comment
10

Ghost in the Shell: Stand Alone Complex is an anime television series produced by Production I.G and based on Masamune Shirow's manga Ghost in the Shell. It was written and directed by Kenji Kamiyama, with original character design by Hajime Shimomu... ra and a soundtrack by Yoko Kanno. The first season aired on SKY PerfecTV!'s Perfect Choice from October 2002 to October 2003 and was positively received by critics. A second season titled Ghost in the Shell: S.A.C. 2nd GIG aired on Animax from January 1, 2004 to January 8, 2005. The series centers on the members of an elite cybernetic law enforcement unit known as Public Security Section 9 as they investigate cyber-crime and terrorism cases; these cases often are connected to their pursuit of an elite "Super Class A" hacker and corporate terrorist known as "The Laughing Man." A series of associated short comic animations, titled Tachikomatic Days, aired after each episode. These shorts star the Tachikoma "think-tanks" from the main series, and they typically relate directly to the story of the preceding Stand Alone Complex episode   more
1 vote
0 comments
Ghost in the Shell: Stand Alone Complex - Voter Comments
No Comments
Vote & Comment
11

Eureka Seven, known in Japan as Psalms of Planets Eureka seveN, is a Japanese mecha anime TV series by Bones. Eureka Seven tells the story of Renton Thurston and the outlaw group Gekkostate, his relationship with the enigmatic mecha pilot Eureka, an... d the mystery of the Coralians.Bandai produced three video games based on Eureka Seven; two of them are based on events prior to the show, while the third is based on the first half of the show. Both the original concept of the anime and the video game Eureka Seven vol. 1: New Wave have been adapted into manga series as well, although with many significant changes primarily at the end. The TV series has also been adapted into a series of four novels and a movie.A sequel anime and manga series, Eureka Seven: Astral Ocean, was released in 2012   more
1 vote
0 comments
Eureka Seven - Voter Comments
No Comments
Vote & Comment
13

Morgan from the bus

Black Lagoon is a Japanese manga series written and illustrated by Rei Hiroe. It has been published in Shogakukan's Monthly Sunday Gene-X since 2002, and nine collected volumes have been released so far. It was later adapted into an anime television...  series, by Madhouse, that aired from April to June 2006 for twelve episodes. A second season, subtitled "The Second Barrage", ran for twelve weeks starting on October 2, 2006. A five volume original video animation series, titled Roberta's Blood Trail, was released from July 2010 to June 2011. Viz Media began releasing an English translation of the manga in North America on August 12, 2008. Madman Entertainment licensed the anime in Australasia and the United Kingdom. The anime was dubbed and originally licensed in English by Geneon Entertainment in North America; it is now licensed by Funimation Entertainment. Funimation later licensed the OVA, which also was licensed by Kazé in the UK, for release in spring 2013   more
0 votes
0 comments
Black Lagoon - Voter Comments
No Comments
Vote & Comment
21

Rurouni Kenshin: Meiji Swordsman Romantic Story, also known as Rurouni Kenshin and Samurai X, is a Japanese manga series written and illustrated by Nobuhiro Watsuki. The story takes place during the early Meiji period in Japan and follows a former a... ssassin from the Bakumatsu, named Himura Kenshin, who becomes a wanderer to protect the people of Japan. Watsuki wrote this series upon his desire of making a shōnen manga different from the other ones that were published at the time, with Kenshin being a former assassin and the story taking a more serious tone as it continued. The manga revolves around themes of atonement, peace, and romance. The manga initially appeared in Shueisha's Weekly Shōnen Jump from April 11, 1994, to November 4, 1999. The complete work consists of 28 tankōbon volumes, while years later it was reprinted into twenty-two kanzenban volumes. Studio Gallop, Studio Deen and SPE Visual Works adapted the manga into an anime series which aired in Japan from January 10, 1996 to September 8, 1998. Besides an animated feature film, two series of original video animations were also produced. The first adapted stories from the manga that were not featured in the anime, while the second was a sequel to the manga. Several art and guidebooks for Rurouni Kenshin have been published and writer Kaoru Shizuka has authored three official light novels which were published by Shueisha. Many video games have also been released for the PlayStation, PlayStation 2, and PlayStation Portable consoles. A successful live-action theatrical film adaptation was released in 2012, with limited international screenings   more
0 votes
0 comments
Rurouni Kenshin - Voter Comments
No Comments
Vote & Comment
22

Darker than Black, known in Japan as Darker than Black: The Black Contractor, is an anime television series created, directed and written by Tensai Okamura and animated by Bones. It premiered across Japan from April 5, 2007 on MBS, TBS, and its affi... liated broadcast stations, with its satellite television premiere in Japan on Animax in May 2007. The music for the series is composed by Yoko Kanno. The series has also been adapted into two manga series, which are serialized in Monthly Asuka and in Young Gangan. The anime also was awarded Best Original Anime of The Year by GoGoplex, a popular magazine for teens. A sequel titled Darker than Black: Gemini of the Meteor premiered in Japan on October 8, 2009   more
0 votes
0 comments
Darker than Black - Voter Comments
No Comments
Vote & Comment
23

Eureka Seven: AO is a 2012 Japanese mecha anime television series by Bones, serving as a sequel to the original Eureka Seven anime. AO tells the story of Ao Fukai, a young boy who "sets destiny in motion again when he held the power." It is being ad... apted into both an anime and a manga. On December 22, 2011, Kadokawa Shoten's Monthly Shōnen Ace magazine announced that a sequel manga titled Eureka Seven: AO would be launched in their January 26 issue. Yūichi Katō is drawing the manga based on the original story by BONES. Later that same day, an anime adaption of the manga was announced, and began airing on April 13, 2012, on MBS. The anime has been licensed for streaming and home video release by Funimation Entertainment who will stream the series on the video site. Originally set to air its last episode on September 28, 2012, the series went on a two-week hiatus due to the 2012 Summer Olympics, thus ending its run on the third-to-last episode. The two final episodes were broadcast on November 20, 2012. On May 16, 2013 Funimation released a trailer of the English dub, followed by stating that the DVD/Blu-ray release would be scheduled for August 13, 2013. The show currently airs on the Funimation Channel on Tuesday nights at 10:00 PM starting October 8, 2013   more
0 votes
0 comments
Eureka Seven: AO - Voter Comments
No Comments
Vote & Comment
25