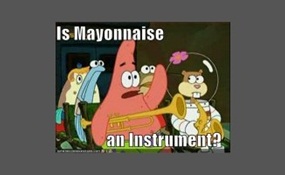 What is your favorite instrument? 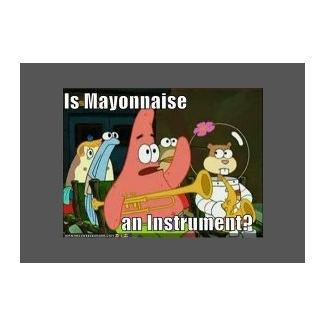 Mayonnaise, often abbreviated as mayo, is a thick, creamy sauce often used as a condiment. It is a stable emulsion of oil, egg yolks and either vinegar or lemon juice, with many options for embellishment with other herbs and spices. Lecithin in the egg yolk is the emulsifier.Mayonnaise varies in color, but is often white, cream, or pale yellow. It may range in texture from that of light cream to a thick gel. In countries influenced by French culture, mustard is also a common ingredient, but the addition of mustard turns the sauce into a remoulade with a different flavor and the mustard acts as an additional emulsifier. In Spain, Portugal and Italy, olive oil is used as the oil, and mustard is never included.Commercial egg-free mayonnaise-like spreads are available for people who want to avoid animal fat and cholesterol, or who are allergic to eggs. 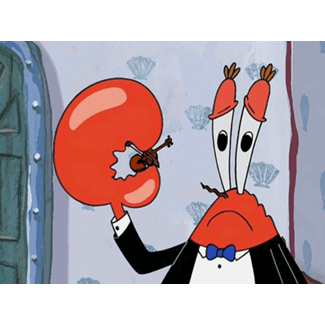 The violin, also known as a fiddle, is a string instrument, usually with four strings tuned in perfect fifths. It is the smallest, highest-pitched member of the violin family of string instruments, which also includes the viola, and the cello. The modern word is derived from the Italian word violino, literally 'small viola'.Someone who plays the violin is called a violinist or a fiddler. The violinist produces sound by drawing a bow across one or more strings, by plucking the strings, or by a variety of other techniques. The violin is played by musicians in a wide variety of musical genres, including Baroque music, classical, jazz, folk music, rock and roll, and soft rock. The violin has come to be played in many non-Western music cultures all over the world.The violin is sometimes informally called a fiddle, regardless of the type of music played on it.The violin is first known in 16th-century Italy, with some further modifications occurring in the 18th and 19th centuries. Violinists and collectors particularly prize the instruments made by the Stradivari, Guarneri and Amati families from the 16th to the 18th century in Brescia and Cremona and by Jacob Stainer in Austria. 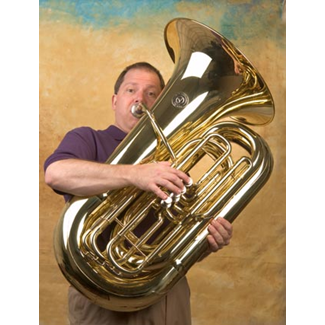 The tuba is the largest and lowest-pitched instrument in the brass family. Sound is produced by vibrating or "buzzing" the lips into a large cupped mouthpiece. It first appeared in the mid 19th-century, making it one of the newest instruments in the modern orchestra and concert band. The tuba largely replaced the ophicleide. Tuba is Latin for 'trumpet'.A person who plays the tuba is known as a tubaist or tubist. In the United Kingdom a person who plays the tuba in an orchestra is known simply as a tuba player; in a brass band or military band they are known as a bass player. 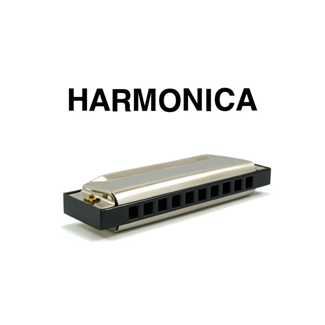 The harmonica, also French harp, blues harp, and mouth organ, is a free reed wind instrument used worldwide in many musical genres, notably in blues, American folk music, jazz, country, and rock and roll. There are many types of harmonica, including diatonic, chromatic, tremolo, octave, orchestral, and bass versions. A harmonica is played by using the mouth to direct air into and out of one or more holes along a mouthpiece. Behind the holes are chambers containing at least one reed. A harmonica reed is a flat elongated spring typically made of brass, stainless steel, or bronze, which is secured at one end over a slot that serves as an airway. When the free end is made to vibrate by the player's air, it alternately blocks and unblocks the airway to produce sound.Reeds are pre-tuned to individual pitches. Tuning may involve changing a reed's length, the weight near its free end, or the stiffness near its fixed end. Longer, heavier and springier reeds produce deeper, lower sounds; shorter, lighter and stiffer reeds make higher-pitched sounds. 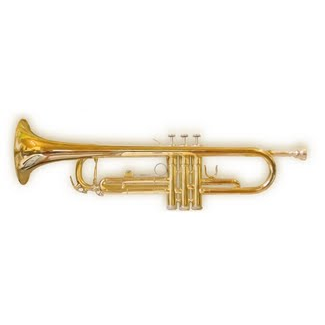 A trumpet is a musical instrument. It is the highest register in the brass family. Trumpets are among the oldest musical instruments, dating back to at least 1500 BC. They are played by blowing air through closed lips, producing a "buzzing" sound that starts a standing wave vibration in the air column inside the instrument. Since the late 15th century they have primarily been constructed of brass tubing, usually bent twice into a rounded oblong shape.There are several types of trumpet. The most common is a transposing instrument pitched in B♭ with a tubing length of about 148 cm. Earlier trumpets did not have valves, but modern instruments generally have either three piston valves or, more rarely, three rotary valves. Each valve increases the length of tubing when engaged, thereby lowering the pitch.A musician who plays the trumpet is called a trumpet player or trumpeter. 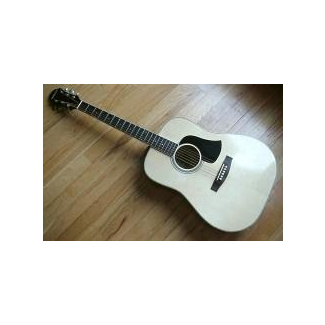 An acoustic guitar is a guitar that uses only acoustic means to transmit the strings' vibrational energy to the air in order to make a sound. Acoustic means not electric or using electric impulses. The sound waves of an acoustic guitar are directed through the body of the guitar creating a sound. This typically involves the use of a sound board and a sound box to strengthen the vibrations of the strings.The main source of sound in an acoustic guitar is the string, which is plucked with the finger or with a plectrum. The string vibrates at a necessary frequency and also create many harmonics at various different frequencies. The frequencies produced can depend on string length, mass, and tension. The string causes the soundboard and sound box to vibrate, and as these have their own resonances at certain frequencies, they amplify some string harmonics more strongly than others, hence affecting the timbre produced by the instrument. 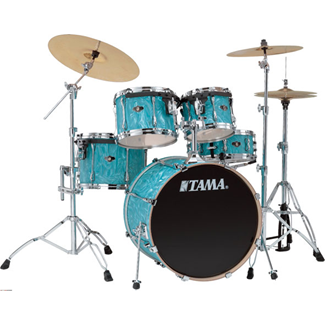 A drum kit, drum set or trap set is a collection of drums and other percussion instruments set up to be played/struck by a single player.The traditional drum kit consists of a mix of drums and idiophones. More recently kits have also included electronic instruments, with both hybrid and entirely electronic kits now in common use.A standard modern kit, as used in popular music and taught in many music schools, contains:A snare drum, mounted on a stand, placed between the player's knees and played with drum sticksA bass drum, played by a pedal operated by the right/left footA hi-hat stand and cymbals, operated by the left foot and played with the sticks, particularly but not only the right hand stickOne or more tom-tom drums, played with the sticksOne or more cymbals, played with the sticksAll of these are classed as non-pitched percussion, allowing for the music to be scored using percussion notation, for which a loose semi-standardized form exists for the drum kit. If some or all of them are replaced by electronic drums, the scoring and most often positioning remains the same, allowing a standard teaching approach.