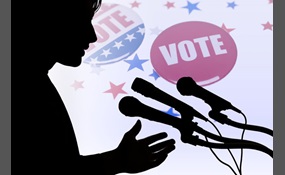 What is your favorite major political party?

The Republican Party, commonly referred to as the GOP, is one of the two major contemporary political parties in the United States, the other being its historic rival the Democratic Party. Founded by anti-slavery activists in 1854, the GOP dominated...  politics nationally and in most of the North for most of the period from 1860 to 1932. There have been 18 Republican presidents, the first being Abraham Lincoln, who served from 1861 until his assassination in 1865, and the most recent being George W. Bush, who served two full four-year terms 2001 to 2009. The most recent Republican presidential nominee was former Massachusetts governor Mitt Romney who lost in 2012.The party's platform is generally based upon American conservatism, in contrast to the contemporary American liberalism of the rival Democratic Party. The Republican Party's conservatism involves supporting free market capitalism, opposing regulation and labor unions, and supporting socially conservative policies. The party is generally split on the issue of how to deal with illegal immigration   more
7 votes
1 comment
Republican Party - Voter Comments

The Green Party of the United States is a national political party in the United States founded in 1984 as a federation of state green parties. With its founding, the Green Party of the United States became the primary national Green organization in...  that country, eclipsing the Greens/Green Party USA, which emphasized non-electoral movement building. The Association of State Green Parties, a forerunner organization, first gained widespread public attention during Ralph Nader's United States presidential campaigns in 1996 and 2000. The party has no current representation in the U.S. House of Representatives nor the Senate and controls no governorships nor other state-wide elected positions. At the state legislature level, until 2014 the party controlled one seat in the Arkansas House of Representatives. A number of Greens around the United States hold positions as city and town council members and mayors   more
3 votes
0 comments
Green Party - Voter Comments
No Comments
Vote & Comment
3

The Libertarian Party is an American national political party that reflects, represents and promotes the ideas and philosophies of libertarianism and free-market, laissez-faire capitalism. The Libertarian Party was conceived at meetings in the home ... of David F. Nolan in Westminster, Colorado in 1971. The official formation of the Libertarian Party occurred on December 11, 1971 in Colorado Springs, Colorado. The founding of the party was prompted in part due to concerns about the Vietnam War, conscription, and the end of the gold standard.Although there is not an explicitly-labeled "left" or "right" designation of the party, many members, such as 2012 presidential nominee Gary Johnson, state that they are more socially liberal than the Democrats, but more fiscally conservative than the Republicans. The party has generally promoted a classical liberal platform, in contrast to the social liberal and progressive platform of the Democrats and the more conservative platform of the Republicans. Current policy positions include lowering taxes, allowing people to opt-out of Social Security, abolishing welfare, ending the prohibition of illegal drugs, and supporting gun ownership rights   more
3 votes
0 comments
Libertarian Party - Voter Comments
No Comments
Vote & Comment
4

The Constitution Party is a right-wing nationalist political party in the United States.The party believes that the United States is a Christian nation founded on the basis of the Bible and that jurisprudence should be restored to what the party cla... ims is its "Biblical foundations". It has been described by its critics as a theocratic party, as with its predecessor, the U.S. Taxpayers Party. The Constitution Party advocates a platform which reflects the Party's understanding of the principles set forth in the Declaration of Independence, the Constitution of the United States, the Bible, and the Bill of Rights.The party was founded as the "U.S. Taxpayers' Party" by Howard Philips in 1991. Phillips was also the party's candidate in the 1992, 1996 and 2000 presidential elections. The party's name was changed to the Constitution Party in 1999; however, some state affiliate parties are known under different names. The party's platform is predicated on the party's understanding of the original intent of the nation's founding documents. The party absorbed the American Independent Party, which was founded for George Wallace's 1968 presidential campaign   more
3 votes
1 comment
Constitution Party - Voter Comments

The Democratic Party is one of the two major contemporary political parties in the United States, along with the younger Republican Party. Tracing its origins back to the Democratic-Republican Party, the modern Democratic Party was founded around 18... 28. There have been 15 Democratic presidents, the first being Andrew Jackson, who served from 1829 to 1837; the most recent is the current president, Barack Obama, who has served since 2009.Since the 1930s, the party has promoted a social-liberal platform, supporting a mixed economy and social justice. The party's philosophy of contemporary American liberalism advocates civil and political rights and liberties along with social justice. It pursues a mixed economy by providing government intervention and regulation in the economy. These interventions, such as universal health care, labor protection, social programs, equal opportunity, consumer protection, and environmental protection, form the party's economic policy basis. Until the late 20th century the party had a powerful conservative and populist wing based in the rural South, which over time has greatly diminished   more
2 votes
0 comments
Democratic Party - Voter Comments
No Comments
Vote & Comment
Leave a comment...
(Maximum 900 words)

Diqiucun_Cunmin says2015-08-02T18:00:22.8499145Z
Report Post
None of them are really good to me, but I guess either Democratic or Green would be the lesser of the five evils.
Privacy Policy | Terms of Use
Sitemap | View Desktop Version
©2021 Debate.org. All rights reserved.