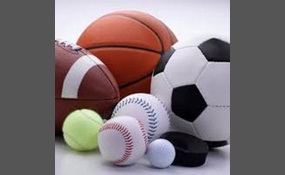 What is your favorite sport?

Association football, more commonly known as football or soccer, is a sport played between two teams of eleven players with a spherical ball. It is played by 250 million players in over 200 countries, making it the world's most popular sport. The ga... me is played on a rectangular field with a goal at each end. The object of the game is to score by getting the ball into the opposing goal. The goalkeepers are the only players allowed to touch the ball with their hands or arms while it is in play and then only in their penalty area. Outfield players mostly use their feet to strike or pass the ball, but may use their head or torso to strike the ball instead. The team that scores the most goals by the end of the match wins. If the score is level at the end of the game, either a draw is declared or the game goes into extra time and/or a penalty shootout depending on the format of the competition. The Laws of the Game were originally codified in England by The Football Association in 1863. Association football is governed internationally by the International Federation of Association Football which organises a World Cup every four years   more
7 votes
0 comments
Football - Voter Comments
No Comments
Vote & Comment
2

Basketball is a sport played by two teams of five players on a rectangular court. The objective is to shoot a ball through a hoop 18 inches in diameter and 10 feet high mounted to a backboard at each end. Basketball is one of the world's most popula... r and widely viewed sports. A team can score a field goal by shooting the ball through the basket during regular play. A field goal scores three points for the shooting team if the player shoots from behind the three-point line, and two points if shot from in front of the line. The team with the most points at the end of the game wins, but additional time is issued when the game ends in a draw. The ball can be advanced on the court by bouncing it while walking or running or throwing it to a team mate. It is a violation to lift or drag one's pivot foot without dribbling the ball, to carry it, or to hold the ball with both hands then resume dribbling. As well as many techniques for shooting, passing, dribbling and rebounding, basketball teams generally have player positions and offensive and defensive structures   more
6 votes
0 comments
Basketball - Voter Comments
No Comments
Vote & Comment
3

Hockey is a family of sports in which two teams play against each other by trying to maneuver a ball or a puck into the opponent's goal using a hockey stick. In many areas, one sport is generally referred to simply as hockey.
4 votes
2 comments
Hockey - Voter Comments

American football is a sport played by two teams of eleven players on a rectangular field with goalposts at each end. The offense, the team with control of the football, attempts to advance down the field by running with or passing the ball, while t... he team without control of the ball, the defense, aims to stop their advance and take control of the ball for themselves. The offense must advance at least ten yards in four downs, or plays, or else they turn over the football to the opposing team; if they succeed, they are given a new set of four downs. Points can be scored by advancing the ball into the opposing team's end zone for a touchdown, kicking the ball through the opponent's goalposts for a field goal, or tackling the ballcarrier in his own end zone for a safety. The team with the most points at the end of a game wins. American football evolved in the United States, originating from the sport of rugby football. The first game of American football was played on November 6, 1869, between two college teams, Rutgers and Princeton, under rules resembling a mix of rugby and soccer   more
3 votes
2 comments
American football - Voter Comments

Figure skating is a sport and activity in which individuals, duos, or groups perform on figure skates on ice. It was the first winter sport included in the Olympics, in 1908. The four Olympic disciplines are men's singles, ladies' singles, pair skat... ing, and ice dancing. Non-Olympic disciplines include synchronized skating and four skating. In senior-level competition, skaters generally perform two programs which, depending on the discipline, may include spins, jumps, moves in the field, lifts, throw jumps, death spirals, and other elements or moves.The blade has a groove on the bottom creating two distinct edges — inside and outside. In figure skating, the skater should glide on one edge of the blade and not on both at the same time, which is referred to as a flat edge. Skates used in single and pair skating have a set of large, jagged teeth called toe picks on the front of the blade. Ice dancing blades are an inch shorter in the rear and have smaller toe picks.Figure skaters compete at various levels from beginner up to the Olympic level at local, national, and international competitions   more
2 votes
1 comment
Figure skating - Voter Comments

Cricket is a bat-and-ball game played between two teams of 11 players each on a field at the centre of which is a rectangular 22-yard long pitch. Each team takes its turn to bat, attempting to score runs, while the other team fields. Each turn is kn... own as an innings.The bowler delivers the ball to the batsman who attempts to hit the ball with his bat away from the fielders so he can run to the other end of the pitch and score a run. Each batsman continues batting until he is out. The batting team continues batting until ten batsmen are out, or a specified number of overs of six balls have been bowled, at which point the teams switch roles and the fielding team comes in to bat.In professional cricket the length of a game ranges from 20 overs per side to Test cricket played over five days. The Laws of Cricket are maintained by the International Cricket Council and the Marylebone Cricket Club with additional Standard Playing Conditions for Test matches and One Day Internationals.Cricket was first played in southern England in the 16th century. By the end of the 18th century, it had developed to be the national sport of England   more
1 vote
0 comments
Cricket - Voter Comments
No Comments
Vote & Comment
7

Beach volleyball is a team sport played by two teams of two players on a sand court divided by a net. In order to keep the ball in play, a team can only hit the ball up to three times before returning it over the net. It has been an Olympic discipli... ne since the 1996 Games.As in indoor volleyball, the object of the game is to send the ball over the net in order to ground it on the opponent's court, and to prevent the same effort by the opponent. A team is allowed up to three touches to return the ball. The ball is put in play with a service—a hit by the server from behind the rear court boundary over the net to the opponents. The rally continues until the ball is grounded on the playing court, goes "out", or is not returned properly.The team winning a rally scores a point and serves to start the following rally. The four players serve in the same sequence throughout the match, changing server each time a rally is won by the receiving team. Originating in Southern California, beach volleyball has achieved worldwide popularity   more
1 vote
0 comments
Beach volleyball - Voter Comments
No Comments
Vote & Comment
8

Baseball is a bat-and-ball game played between two teams of nine players each who take turns batting and fielding. The offense attempts to score runs by hitting a ball thrown by the pitcher with a bat and moving counter-clockwise around a series of ... four bases: first, second, third, and home plate. A run is scored when a player advances around the bases and returns to home plate. Players on the batting team take turns hitting against the pitcher of the fielding team, which tries to prevent runs by getting hitters out in any of several ways. A player on the batting team who reaches a base safely can later attempt to advance to subsequent bases during teammates' turns batting, such as on a hit or by other means. The teams switch between batting and fielding whenever the fielding team records three outs. One turn batting for both teams, beginning with the visiting team, constitutes an inning. A game comprises nine innings, and the team with the greater number of runs at the end of the game wins. Evolving from older bat-and-ball games, an early form of baseball was being played in England by the mid-18th century   more
1 vote
0 comments
Baseball - Voter Comments
No Comments
Vote & Comment
9

Rugby football is a style of football that developed at Rugby School and was one of many versions of football played at English public schools during the 19th century. The two main types of rugby are rugby league and rugby union. Although these two ... forms share the same objective of getting the ball over the line to score a try, the specific rules are different   more
1 vote
1 comment
Rugby - Voter Comments

Ping Pong, or as the Chinese call it, "Ping Ping."