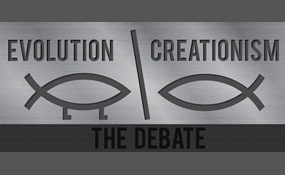 What is your position on the creation-evolution controversy?

Not a face-off as expected, hmm? If you're a creationist, please choose a narrower option instead of just "old earth" or "young earth", unless you're unsure.

Agnostic evolution is the position of acceptance of biological evolution, combined with the belief that it is not important whether God is, was, or will have been involved.
15 votes
1 comment
Agnostic evolution - Voter Comments

Jo9711 says2015-06-25T00:08:39.1844901-05:00
Report Post
As a rational human being I solidly stand by the view of biological evolution in recognition of extensive research and evidence supporting it. The studies are overwhelmingly supportive of evolution and there is no other scientific theory that opposes this to such a degree. However, that doesn't mean I don't believe there might be evidence of Intelligent design or creationism. But there is little to zero evidence supporting the claims of Religion.
Vote & Comment
2

Materialistic evolution is the position of acceptance of biological evolution, combined with the position that the supernatural does not exist (a position common to philosophical naturalists, humanists and atheists). It is a view championed by the N... ew Atheists, who argue strongly that the creationist viewpoint is not only dangerous, but is completely rejected by science   more
12 votes
3 comments
Materialistic evolution - Voter Comments

MrJosh says2015-06-25T23:32:46.1222199-05:00
Report Post
The description contains one error in my opinion. I do not claim that the supernatural does not exist, I simply see no reason to believe in it. There might be a god, there might not be, but it isn't really a relevant part of the discussion of evolution.

Intelligent Design The theory of intelligent design (ID) holds that certain features of the universe and of living things are best explained by an intelligent cause rather than an undirected process such as natural selection. ID is thus a scientific...  disagreement with the core claim of evolutionary theory that the apparent design of living systems is an illusion.In a broader sense, Intelligent Design is simply the science of design detection -- how to recognize patterns arranged by an intelligent cause for a purpose. Design detection is used in a number of scientific fields, including anthropology, forensic sciences that seek to explain the cause of events such as a death or fire, cryptanalysis and the search for extraterrestrial intelligence (SETI). An inference that certain biological information may be the product of an intelligent cause can be tested or evaluated in the same manner as scientists daily test for design in other sciences.ID is controversial because of the implications of its evidence, rather than the significant weight of its evidence. ID proponents believe science should be conducted objectively, without regard to the implications of its findings. This is particularly necessary in origins science because of its historical (and thus very subjective) nature, and because it is a science that unavoidably impacts religion. Positive evidence of design in living systems consists of the semantic, meaningful or functional nature of biological information, the lack of any known law that can explain the sequence of symbols that carry the messages, and statistical and experimental evidence that tends to rule out chance as a plausible explanation. Other evidence challenges the adequacy of natural or material causes to explain both the origin and diversity of life.Intelligent Design is an intellectual movement that includes a scientific research program for investigating intelligent causes and that challenges naturalistic explanations of origins which currently drive science education and research   more
3 votes
0 comments
Intelligent Design - Voter Comments
No Comments
Vote & Comment
4

Theistic evolution is the general view that, instead of faith being in opposition to biological evolution, some or all classical religious teachings about God and creation are compatible with some or all of modern scientific theory, including, speci... fically, evolution. It generally views evolution as a tool used by a creator god, who is both the first cause and immanent sustainer/upholder of the universe; it is therefore well accepted by people of strong theistic (as opposed to deistic) convictions. Theistic evolution can synthesize with the day-age interpretation of the Genesis creation myth; most adherents consider that the first chapters of Genesis should not be interpreted as a "literal" description, but rather as a literary framework or allegory. This position generally accepts the viewpoint of methodological naturalism, a long-standing convention of the scientific method in science. Theistic evolutionists have frequently been prominent in opposing creationism (including intelligent design). Notable examples have been biologist Kenneth R. Miller and theologian John F. Haught, who testified for the plaintiffs in Kitzmiller v. Dover Area School District. Another example is the Clergy Letter Project, an organization that has created and maintains a statement signed by American Christian clergy of different denominations rejecting creationism, with specific reference to points raised by intelligent design proponents. Theistic evolutionists have also been active in Citizens Alliances for Science that oppose the introduction of creationism into public school science classes (one example being evangelical Christian geologist Keith B. Miller, who is a prominent board member of Kansas Citizens for Science)   more
3 votes
0 comments
Theistic evolution - Voter Comments
No Comments
Vote & Comment
5

Young Earth creationism rejects completely the conventional scientific approach and argues for the belief that the Earth was created by God within the last 10,000 years, literally as described in Genesis, within the approximate timeframe of biblical...  genealogies (detailed for example in the Ussher chronology). Young Earth creationists often believe that the Universe has a similar age to the Earth's. Creationist cosmologies are attempts by some creationist thinkers to give the universe an age consistent with the Ussher chronology and other Young-Earth timeframes. This belief generally has a basis in biblical literalism   more
2 votes
2 comments
Young Earth creationism - Voter Comments

Progressive creationism is the religious belief that God allows certain natural process (such as gene mutation and natural selection) to affect the development of life, but has also directly intervened at key moments in life’s history to guide those...  processes or, in some views, create new species altogether (often to replenish the earth). This view of creationism allows for and accepts fluctuation within defined species but rejects transitional evolution as a viable mechanism to create a gradual ascent from unicellular organisms to advanced life. Progressive creationists point to multiple destructive events in the Earth's history (such as meteoric impacts and large-scale global volcanic activity) and geological evidence for rapid subsequent speciation as evidence for distinct, typically limited intervention by a Creator. This view can be applied (as it often is) to virtually any of the other old Earth views   more
1 vote
1 comment
Progressive creationism - Voter Comments

Neo-creationists intentionally distance themselves from other forms of creationism, preferring to be known as wholly separate from creationism as a philosophy. They wish to re-frame the debate over the origins of life in non-religious terms and with... out appeals to scripture, and to bring the debate before the public. Neo-creationists may be either young Earth or old Earth creationists, and hold a range of underlying theological viewpoints (e.G. On the interpretation of the Bible). Neo-creationism currently exists in the form of the intelligent design movement, which has a 'big tent' strategy making it inclusive of many young Earth creationists (such as Paul Nelson and Percival Davis)   more
0 votes
0 comments
Neo-creationism - Voter Comments
No Comments
Vote & Comment
9

Many young Earth creationists distinguish their own hypotheses from the "Omphalos hypothesis", today more commonly referred to as the apparent age concept, put forth by the naturalist and science writer Philip Henry Gosse. Omphalos was an unsuccessf... ul mid-19th century attempt to reconcile creationism with geology. Gosse proposed that just as Adam had a navel (omphalos is Greek for navel), evidence of a gestation he never experienced, so also the Earth was created ex nihilo complete with evidence of a prehistoric past that never actually occurred. The Omphalos hypothesis allows for a young Earth without giving rise to any predictions that would contradict scientific findings of an old Earth. Although both logically unassailable and consistent with a literal reading of scripture, Omphalos was rejected at the time by scientists on the grounds that it was completely unfalsifiable and by theologians because it implied to them a deceitful God, which they found theologically unacceptable. Today, in contrast to Gosse, young Earth creationists posit that not only is the Earth young but that the scientific data supports that view. However, the apparent age concept is still used in young Earth creationist literature. There are examples of young Earth creationists arguing that Adam did not have a navel   more
0 votes
0 comments
Omphalos hypothesis - Voter Comments
No Comments
Vote & Comment
11

The "gap theory" acknowledges a vast age for the universe, including the Earth and solar system, while asserting that life was created recently in six 24-hour days by divine fiat. Genesis 1 is thus interpreted literally, with an indefinite "gap" of ... time inserted between the first two verses. (Some gap theorists insert a "primordial creation" and Lucifer's rebellion into the gap.) Young Earth Creationist organizations argue that the gap theory is unscriptural, unscientific, and not necessary, in its various forms   more
0 votes
0 comments
Gap creationism - Voter Comments
No Comments
Vote & Comment
Leave a comment...
(Maximum 900 words)