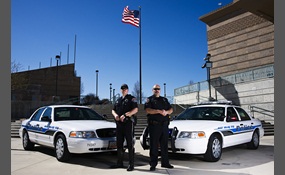 What kind of fire power do you think general police officers should have?

Police officer weapons vary from nation to nation. Some nations don't allow officers to carry weapons, while in others every officer is a military man. Which is the best to defend our society while also not being oppressive?

A handgun is a firearm designed to be handheld, in either one or both hands. This characteristic differentiates handguns as a general class of firearms from long guns such as rifles and shotguns.Major handgun subtypes are the revolver and pistol; ot... her subtypes include derringers, single-shot pistols, semi-automatic pistols, pepperboxes, and machine pistols.The overlapping variations in meaning of the words "pistol" and "handgun" are discussed below.Although handgun use often includes bracing with a second hand, the essential distinguishing characteristic of a handgun is its facility for one-handed operation   more
6 votes
1 comment
Handgun - Voter Comments

Tasers are either close-range or ranged shock weapons that allow users to subdue suspects without injuring them greatly. Taser voltage can be adjusted to do more damage, but this is usually only to either knock a target unconscious or subdue larger ... criminals. Most police officers now carry tasers   more
3 votes
1 comment
Tasers - Voter Comments

A militarist state is the only way we can root out terrorism and any violent crimes. This may be drastic, but it's for the best.
2 votes
1 comment
They should be equipped like any other soldier - Voter Comments

None, only a single department of firearm specialists (such as SWAT members) will be armed.

Whether it be pepper spray, canines, or just bare fists; police officers should not be wielding weapons that can seriously injure us or even kill us. We should respect the law, not fear them, even if that is at the cost of them being more unprepared...  against greater crimes. Firearm specialists can't arrive on site as quickly as police officers and there are way less in number   more
0 votes
0 comments
None, only a single department of firearm specialists (such as SWAT members) will be armed. - Voter Comments
No Comments
Vote & Comment
5

Batons used to be highly used by police officers. They were somewhat efficient, but they could also be abused via brutality. Some police officers still carry these around when a criminal needs to be subdued.
0 votes
0 comments
Batons - Voter Comments
No Comments
Vote & Comment
6

A submachine gun is an air-cooled, magazine-fed, automatic carbine designed to fire pistol cartridges. The term "submachine gun" was coined by John T. Thompson, the inventor of the Thompson submachine gun.The submachine gun was developed during Worl... d War I. At its zenith in World War II, millions of SMGs were made. Today, submachine guns have been largely replaced by assault rifles, which have a greater effective range and are capable of penetrating ballistic helmets and body armor used by modern infantrymen. However, submachine guns are still widely used by police and military special forces, who value the SMG's reduced recoil and noise signature, especially when suppressed.There are some inconsistencies in the classification of submachine guns. Some sources refer to SMGs as "machine pistols" because they fire pistol-caliber ammunition, for example, the MP-40 and MP5, where "MP" stands for Maschinenpistole. However, the term "machine pistol" is also used to describe a handgun-style firearm capable of fully automatic or burst fire, such as the Stechkin and the H&K VP70   more
0 votes
0 comments
Submachine gun - Voter Comments
No Comments
Vote & Comment
7

A shotgun is a firearm that is usually designed to be fired from the shoulder, which uses the energy of a fixed shell to fire a number of small spherical pellets called shot, or a solid projectile called a slug. Shotguns come in a wide variety of si... zes, ranging from 5.5 mm bore up to 5 cm bore, and in a range of firearm operating mechanisms, including breech loading, single-barreled, double or combination gun, pump-action, bolt-, and lever-action, semi-automatic, and even fully automatic variants.A shotgun is generally a smoothbore firearm, which means that the inside of the barrel is not rifled. Preceding smoothbore firearms, such as the musket, were widely used by armies in the 18th century. The direct ancestor to the shotgun, the blunderbuss, was also used in a similar variety of roles from self defence to riot control. It was often used by cavalry troops due to its generally shorter length and ease of use, as well as by coachmen for its substantial power. However, in the 19th century, these weapons were largely replaced on the battlefield with breechloading rifled firearms, which were more accurate over longer ranges   more
0 votes
0 comments
Shotgun - Voter Comments
No Comments
Vote & Comment
8

An assault rifle is a selective fire rifle that uses an intermediate cartridge and a detachable magazine. Assault rifles are currently the standard service rifles in most modern armies. Examples of assault rifles include the StG 44, AK-47, M16 rifle... , INSAS rifle, QBZ-95, FAMAS, Heckler & Koch G36, and Enfield SA80.The Germans were the first to pioneer the assault rifle concept, during World War II, based upon research that showed that most firefights happen within 400 meters and that contemporary rifles were over-powered for most small arms combat. They sought to develop a select-fire intermediate powered rifle combining the firepower of a submachine gun with the accuracy and range of a rifle. This was done by shortening the standard 7.92x57mm cartridge to 7.92x33mm and giving it a lighter 125 grain bullet, that limited range but allowed for more controllable automatic fireThe result was the Sturmgewehr 44, which the Germans produced in large numbers; approximately half-a-million were made. Unlike previous rifle designs it introduced an over-the-barrel gas system, straight stock and pistol grip to reduce recoil and improve handling characteristics   more
0 votes
0 comments
Assault rifle - Voter Comments
No Comments
Vote & Comment
9

A rifle is a firearm designed to be fired from the shoulder, with a barrel that has a helical groove or pattern of grooves cut into the barrel walls. The raised areas of the rifling are called "lands," which make contact with the projectile, imparti... ng spin around an axis corresponding to the orientation of the weapon. When the projectile leaves the barrel, this spin lends gyroscopic stability to the projectile and prevents tumbling, in the same way that a properly thrown American football or rugby ball behaves. This allows the use of aerodynamically-efficient pointed bullets and thus improves range and accuracy. The word "rifle" originally referred to the grooving, and a rifle was called a "rifled gun." Rifles are used in warfare, hunting and shooting sports.Typically, a bullet is propelled by the contained deflagration of an explosive compound, although other means such as compressed air are used in air rifles, which are popular for vermin control, hunting small game, formal target shooting and casual shooting   more
0 votes
0 comments
Sniper rifles and/or battle rifles - Voter Comments
No Comments
Vote & Comment
Leave a comment...
(Maximum 900 words)